I’ve been stuck on the Ford Transit Van probably due to my Guy Martin fixation, but there 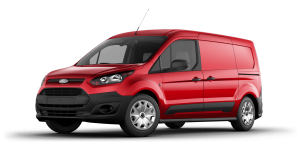 are other choices for a motorcycle carrying vehicle.  I’d been looking at the full sized, extended Transit that is lucky to break 20mpg, but the Transit Connnect is a smaller, more frugal van that will just fit the Tiger while getting more than 30mpg.  It’s also on the road for thousands less than the big one.

The Dodge Ram Promaster City cargo van is another choice in the smaller van category.  It seems to beat the Transit in cargo size (the Tiger fits inside it and it’s likely to be the largest bike I’d ever transport).  It also gets the best mileage.  Comes in yellow too! Nissan makes the NV200.  It’s the smallest in terms of dimensions and engine (a 2.0l 4 cylinder), and gets the best mileage.  The Tiger wouldn’t fit height or length wise in it, but a smaller bike would.

Looking at the three, I think the Dodge gets the nod, though the Transit Connect is within a whisker of it in every category and it starts quite a bit cheaper than the Dodge:

Every one of these manufacturers build a next-size up industrial version of these models.  Nissan makes the NV Cargo, which comes with 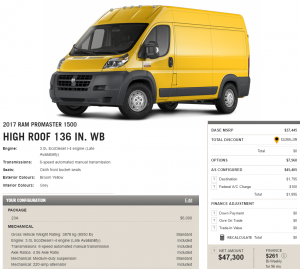 a big V6 or V8 and gets 20mpg.  The fully sized Ford Transit is similar.  Dodge makes the Ram Promaster which comes with an optional 3.0l eco-diesel that gets an impressive 21/29mpg in a big vehicle.

If efficiency is the goal, that big Dodge is in a class of its own.  Similar mileage to the little guys but in a van that I could pretty much stand up in and would carry not one but two Tigers.

It too comes in stunning yellow.  A nice Mechanical Sympathy screen on there and I’d be off to winter motorcycling trips, track days and picking up old bikes!

I think I might be over my Ford Transit fixation, but the whole van thing ain’t cheap.  Perhaps I can engineer a change to a cage that offers a lot of utility instead of just being what I drive when I can’t ride.