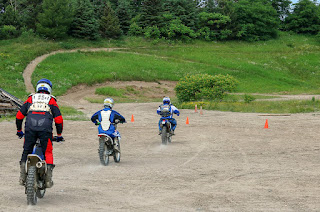 I just spent a hot Saturday on two very different bikes, though they claim much of the same riding intent.  The Yamaha TT-R230 trail bike is a 250lb lightweight that gets you through the gnarliest trails with nary a mark on the trail.  There is barely anything to it and it isn’t road legal, but that simplicity is also its strongest suit when you’re deep in the woods.  With almost nothing to break and being so light, the TT-R230 is also not a worry if you drop it.  It won’t bend under its own weight and there is virtually nothing there to snap off. 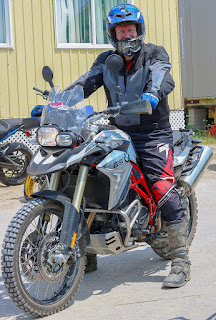 The BMW F800GS I rode later in the day tips the scales at just over twice the weight of the Yamaha.  At just over 500lbs, it is a road ready adventure bike that you don’t need to trailer to a trail, but it’s a heavy thing, so you’re never going to even think about taking it where the Yamaha went.  For fire roads and simple trails, the BMW is fine, but all that weight also means lots of pieces to break off.


After riding both bikes, I really enjoyed the athletic nature and singular intent of the Yamaha, but I also enjoyed the road ready nature of the BMW.  What I’d really like is something in between them.  Fortunately, Yamaha has something in mind.


A few years ago they came out with the T7 concept bike – a lightweight, off road ready, dual sport machine that can make use of the roads and still handle off road in more than a gravel track way that you see all the adventure bikes doing in photoshoots.  The T7 has since morphed into the Ténéré 700 World Raid Prototype.  It’s taken years to get to this point, but I hope that’s because Yamaha aren’t just rolling out another porky, ‘lightweight’ (but not really) adventure bike.  What I’m looking for is something in between the trail bike and an adventure bike.  Something that I don’t need to trailer to trails and can keep up with traffic on the road, but also something that can let me exercise some of my new off road skills without worrying about pieces falling off or getting stuck in the woods. 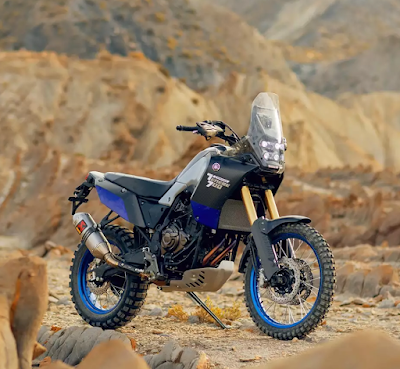 For the Ténéré 700 to hit the mark, I need it to roll in fully fueled and ready to go at less than 400lbs/180kgs.  A Dakar Rally bike (which the Ténéré 700 is obviously designed from) with the big navigation tower and over engineered for strength and endurance comes in at 320lbs/145kgs – so a 180 kilo weight goal isn’t out to lunch.


I also need it to be robust, with lights that won’t snap off the first time it’s laid down and plastic bits built to flex, not snap.  An exhaust that up high and not likely to take a hit when it’s laid down is also an obvious ask.  That sticky outy Akrapovic in the photo is making me think they’ve lost the plot.  I want it tucked up close to the seat and protected.


I’m willing to give up some of the BMW’s road bike plushness for a lightweight, modern, dual sport bike that is truly capable of off roading.  I hope that T7/Ténéré 700 is that bike.