The politics of teaching are on my mind lately.  Ontario has financial issues, and cutbacks seem certain.  I’ve previously talked about how good Ontario’s education system is, the frustration of being an active educator in this political climate, and, most recently, the simplicity of the salary grid.  I’ve asked hard questions about Ontario’s historical assumptions, and I think I haven’t been entirely one sided in the process.

Being active in my union, I fear that I don’t tow the line as much as I should.  Being a department head, I fear that I don’t tow my employer’s line as much as I should.  The sidey-ness of this whole thing frustrates me.  Why this is an adversarial process in which one side tries to take as much as possible from the other, to the point of hurting them if possible, in order to score political points.  It all seems very inefficient to me.  Along with the inefficiency there is the hypocrisy.  How we can expect, even demand, that students be rational, collaborative and unselfish when adults seem so intent on doing the opposite?

I’d like to make a modest proposal.  Now, this modest proposal won’t win you political points in media that cares more about emotional confrontation than truth, and it won’t inflame issues by fabricating lies; this proposal is all about fixing problems, and working collaboratively to do it.  If you want to look revolutionary, this won’t do it for you.  If you just want to hate on something ideologically then this will not suit your style.

This modest proposal is for mature, collegial people who begin with the premise that everyone involved in developing an economically sustainable education system with the highest standards of excellence isn’t going to throw these noble goals away for their own benefit at first opportunity.

This modest proposal won’t play to invented deadlines and the fictional drama that ensues.  It asks for an honest, transparent assessment of what is financially available for sustainable education in Ontario, and then it asks the parties involved to look at how they can maintain the levels of excellence currently achieved while meeting those transparent and accurate financial goals.  People playing games about the value of education need not apply.  If you think quality education isn’t important to the prosperity of Ontario, then you’re an idiot; it’s important that we do this well.

In this proposal, unions don’t protect older teachers at all costs into the largest possible retirement they can get, we consider everyone involved in the system fairly.  We have to consider that no education system is sacred and the end result is focused on fairness and excellence.  This proposal will consider what has worked world wide in terms of meaningful teacher assessment (because OCT sure isn’t it), and all parties will create a better way forward with it.

The first part of this proposal is a voluntary freeze for the next school year while the ministry, boards and unions sit down in a collaborative manner, agree on the finances, and then move to meet them.  If the union wants to offer early buyouts for expensive, senior teachers in order to free up positions for lower paid, new teachers, at great savings to the province, then this should be considered.  Putting money into the hands of people across Ontario isn’t a crime, especially if it helps them retire more independently.  If the ministry wants to restructure the grid in order to encourage excellence in teaching rather than stubbornly holding to a seniority only focus, then the union should join them in creating a grid that recognizes the many ways that teachers contribute to and improve their profession – just showing up to work shouldn’t get you within 5% of maximum salary on any reasonable grid.  If, in the process, senior teachers who do nothing other than show up and go home suddenly find themselves making $15,000 a year less, I’m ok with that, and any sane thinking person should be too.

The historical assumptions around public and semi-private religious schools that receive public funding should be removed, this isn’t 1850.  If we are really worried about the bottom line, trying to run 4 public systems is a needless waste of money.  If people want specialized schooling, private schools eagerly await their cash.  Religious expression has been welcomed in every school I’ve worked at, this isn’t a removal of religious impetus from schooling, it’s an inclusive embracing of it.  If the province is in dire straits, nothing should be sacred other than ensuring the most inclusive, best possible education we can provide. 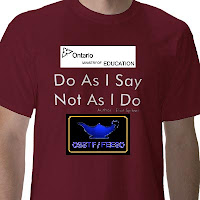 A clear eyed, honest assessment would allow us to restructure education in Ontario in a rational, economically appropriate manner with a clear focus on excellence.  Old habits die hard, but if we can shed them, there is no reason why unions can’t do their job of protecting members without having to compulsively over protect to the point where the incompetent take advantage of the situation.  There is no reason why the ministry can’t focus on producing the best education possible instead of being a political puppet to whichever government has the reigns.  There is no reason why boards can’t facilitate the collaborative relationship between these two educational poles instead of being used as a scapegoat between them.

Step one?  Remove the panic of an artificial deadline.  All sides agree to meaningful and progressive dialogue on what needs to happen.  Strikes aren’t threatened, legislation isn’t threatened, this isn’t a threatening environment, it’s a collaborative one.  If students are expected to be collaborative and honest, why on Earth are adults acting this way?  It’s not very flattering to anyone, and it reeks of hypocrisy when administration and teachers demand it in school next year, from children.