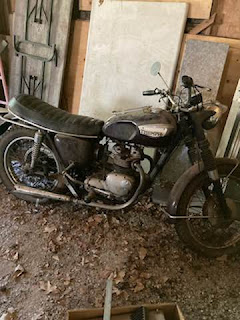 Trawling online advertising for a next level winter project and I’ve come across an interesting option, but then I remembered where I am.

An old Tiger built the year before I was born?  You have my attention.

This is a brown Tiger with a hundred sixty plus K on it?  They say it runs and it’s stock but it needs work – that might be the understatement of the year.

Either that 163,908kms isn’t accurate or this thing has been run into the ground.  If that’s the case, it’s not stopping them for asking four and a half grand, FOUR AND A HALF GRAND (!!!) for it.

Canadian prices for bikes, even old ones that look like piles of shit, never cease to amaze me.

Just for giggles I set FB Marketplace to the UK and had a look at what’s on offer back home.  Here’s a lovely, well restored and ready to ride 1961 Triumph Tiger with less than 2000 miles on it for £2100 ($3645).  Luckily I live in Ontario where a steaming pile of pooh will cost me a thousand bucks more before I then have to pour that much into it again to make it work.  I live in an absurd place.

The other nice thing about the UK is that they tend to honour their history and keep things going.  Canada has a much more use-it-and-chuck-it-in-the-bin approach.  There are some lovely pre-war bikes kicking around on UK’s bike marketplace.  If my novel took off and I was minted, a pre-war Triumph Tiger like the one my hero rides in the book would be on my wishlist. 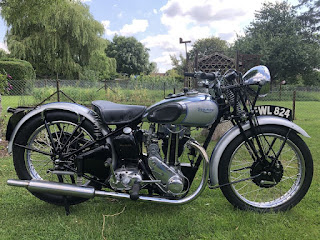 Here’s just such a thing!  A 1938 Triumph Tiger 80.  It’s meticulously looked after and I’d greatly enjoy being the steward of this piece of history before passing it on to someone else who would keep it rolling into the future.

It ain’t cheap (dream machines never are).  They’re asking £12,000 ($20,828) for it, but it’d only go up in value, unlike a new Honda Civic (they cost about the same).  It’s been on sale for a month.  Bet I could get a bit off.  It wouldn’t be a daily rider, but on the days I did ride it, oh baby!  The project would be keeping it going and learning the maintenance and repair on it.

In Ontario this bike doesn’t exist.  If it did exist, some berk would want half a million dollars for it.