Sunday was a long ride up north to clear my head after another week of pandemic teaching where they pile on extra work going on two years into a pandemic and then reduce your ability to do it.  The trusty Tiger was on song and we sailed and sailed, up past Horning’s Mills and through Creemore before tackling the Grey Highlands.  I was timing the ride because I had a meeting!

Last week I joined the Canadian Vintage Motorcycle Group and then connected with their Facebook page (that part is free – if you’re into old bikes I’d urge you to join up!).  By dumb luck the admin who accepted my FB group request happens to live nearby and has a lockup ten minutes from where I live.  He asked if I wanted to see what he had kicking around in terms of project bikes I could buy.  That CVMG membership is already paying off! 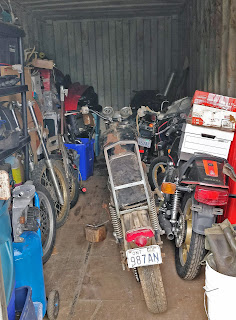 Four hours and three hundred kilometres later I rolled up to a farm just south of town and met Brian and his lovely wife Terry.  We drove down to his storage containers out of sight at the back of the farm and he unlocked a hidden magical kingdom!

The bike I think I’m going to do a full ground up restoration on is a 1971 Triumph Bonneville.  This year was the first oil-in-frame model.  There are benefits to this model that suit me, the main one being that this bike has a taller seat than other Bonnies.

The bike in question has been partially ‘choppered’ with a big sissy bar and king/queen seat.  It also has long front forks – someone was on their way to turning this into some kind of Easy Rider homage, but it won’t stay that way.  I’m not stuck on the stock-at-all-costs angle but I like motorcycling for the dynamic feel of it and a chopper isn’t about that.  A modernized custom that stays true to the original look but makes use of the bits and pieces that will make this classic a bit more dependable is where I’m at. 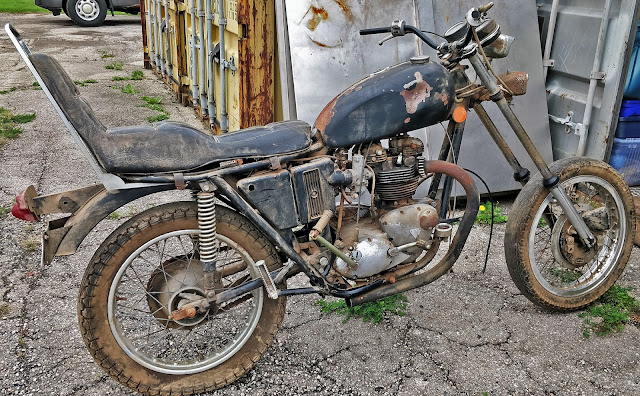 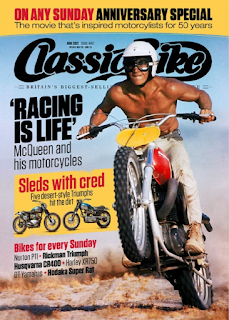 Fortunately, Brian has lots of stock spares which he’d include with it so I’ll be able to strip it down and begin working out how to put it all back together again without having to start from scratch.  When I pick up the bike I should also be getting some tupperware boxes full of additional parts.

Classic Bike Magazine had a great issue in June about Steve McQueen, On Any Sunday and desert racers.  McQueen himself did a Bonneville desert sled back in the ’60s.  I like the stripped down scrambler look of that kind of bike, though I’m not going to go all knobbly tires and brown seat with it, but a simplified, high piped Bonneville for the road?  That’s something I could get into!

I’m going to have to wait until after Thanksgiving Weekend to get my hands on it. I ‘ll also have to figure out how to get it over here, but I’m looking forward to my first deep bike resto after successfully putting a number of early retirements back on the road again.  This one’s going to be an engine out, frame up restoration, Henry Cole style!