I’m busy in the garage these days with the on-going 50 year old Triumph Bonneville restoration project.  It’s a big project that will take some time to sort out, but it’s -20°C outside with snow squall warnings of 20cm of snow coming, which means it’s also regular maintenance time on the two running bikes in the stable.

Last week the Tiger got new chain and sprockets.  I hadn’t done the sprockets on it since getting it over 5 years and 40k ago, so I figured it was time when I noticed the latest chain had stretch in it that made it impossible to set the sag properly.  This week it’s all about the Concours.
I got the Connie last spring in the middle of the second lockdown.  My son and I rented a van and drove down to The Beaches in Toronto and picked it up from its second owner who hadn’t been riding it for several years.  It’s a very low mileage bike (under 30k when I picked it up), but I like to cover all the basic maintenance so I can set a ‘zero point’ for future work. 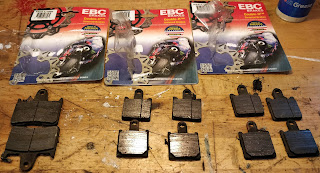 As you would expect from Kawasaki Heavy Industries, the brakes on the GTR1400/C14 Concours are superbly engineered Nissin calipers.  I’d picked up the pads last summer but they hung on the wall until now because I was putting miles on the thing.  I did find the brakes were squeaking a bit, suggesting the calipers weren’t releasing properly – something that can happen in a bike that sits for several seasons.  Like I said before, I don’t like riding a bike where I’m not sure of the maintenance, especially on brakes, so it was due. 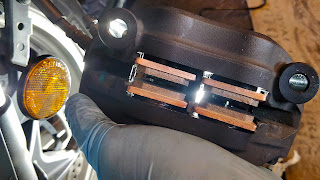 Doing the pads on the Concours is remarkably easy.  You don’t need to remove any body panels and everything is very accessible.  Undo the pin that holds the pads and spring that holds them in and then everything comes apart in your hands.  The pins were rough and there was some odd gunk stuck in the front right caliper.  I cleaned everything up and lubed it and then slotted the new pads into place with the now lubed pins (I think it’s a #5 hex head that does the trick).  All very logical.

The rears are just as easy and a similar design with the same pin and caliper bolt sizes (everything is hex metric).  The back was as mucky as the front and I went to lengths to clean up the pressurized caliper slider and lube the pins and areas where the pads move.  The action immediately felt better afterwards.

Last spring when I got the bike I had to sort out a leak in the hydraulic clutch which resulted in entirely new DOT 4 brake fluid (what the Connie uses in both clutch and brakes).  Changing up your brake fluid removes impurities and moisture that can eventually cause real corrosion headaches in your brake system, so after doing the pads I changed up the brakes fluid on both front and rear systems.  The only fluid change left now on the Concours is the antifreeze.  I’ll do that at the end of next season.  When I tested it the fluid it was still bright green, looked new and showed good temperature range. 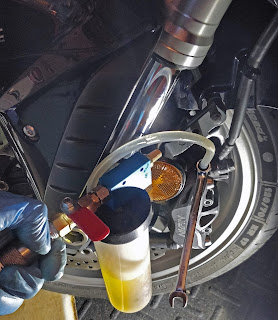 Getting all the air out of the hydraulic clutch so that it felt tight and had positive action was a real pain in the ass last spring.  The good new is that this air-line powered vacuum system did the trick then (it’s not crazy expensive) and takes the headache out of bleeding anything with steady, controllable suction.

In the case of the brake system, I set up the vacuum bleeder and then kept adding fluid in the reservoir at the top until it came out clear (the used stuff was darker and cloudier – it looked almost like water once the new stuff made an appearance.
Just a note:  don’t keep brake fluid laying around open.  It collects moisture and goes off pretty quickly.  As with all brake fluid changes, I opened the bottle and then immediately used it this time.
The front brakes took less than 10 minutes to completely bleed of old fluid and the rears even less.  If you’re doing your own brake/hydraulic fluid maintenance with any kind of regularity, let that hand-pump go and get one of these things (assuming you have an air compressor of course).
Now that the regular movers (I was going to call them new but the Tiger is almost 20 years old and the Connie turned ten last year) are sorted out maintenance wise, it’s back to the old Bonneville project.  Next up I’m rebuilding the two Amal carbs, then it’s rebuilding the ignition system and then (hopefully) hearing the old thing bark for the first time in decades. 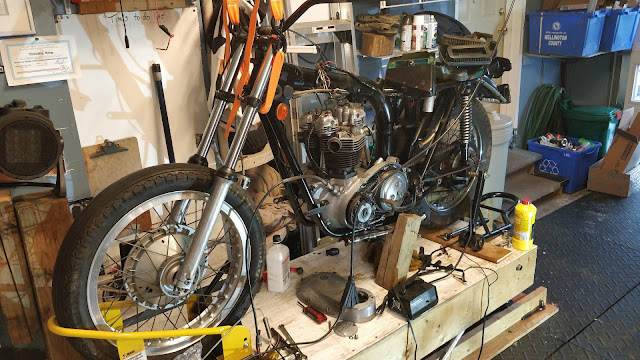 Sometimes the Bonneville can feel like it’s too big to manage, it needs so much, but with two other working machines I’m never going to be angry with it not being ready, though I would love to have it running in time for The Distinguished Gentleman’s Ride on May 22nd.  A ’71 Bonneville with some early 70s retro style would be a blast.