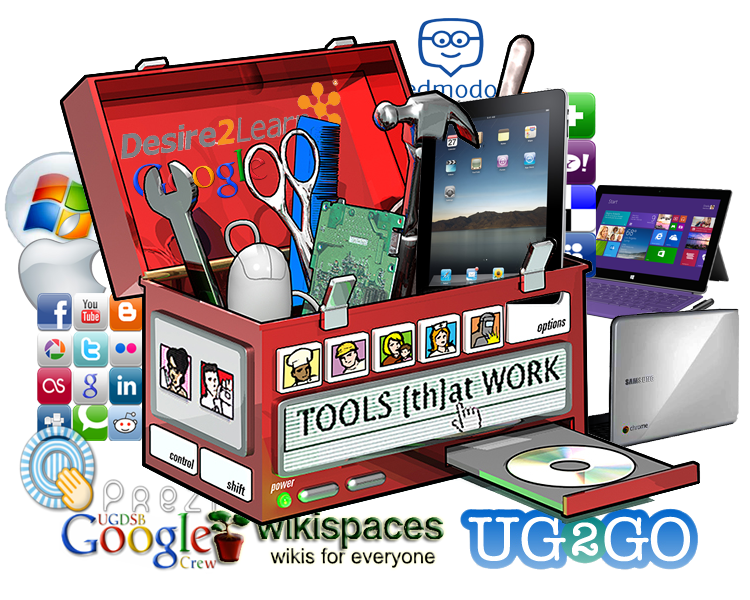 This week we’re off to the On The Rise elearning Ontario conference in Mississauga.

I’m presenting Tuesday on how to avoid the pitfalls of a single online learning environment by building a diverse online digital learning ecosystem. 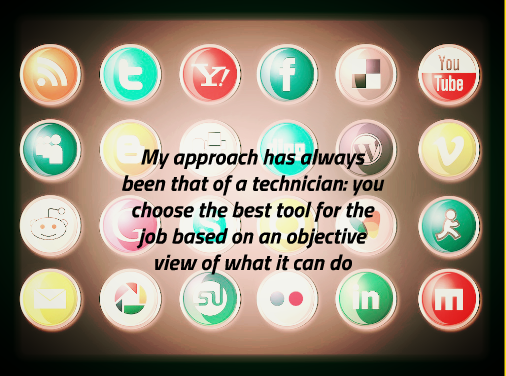 I’m aiming to outline what I’ve used and how in the classroom, then I’m hoping we can crowdsource what other people have used and create a wiki of current, useful digital learning tools with explanations written by the teachers who have made them work. 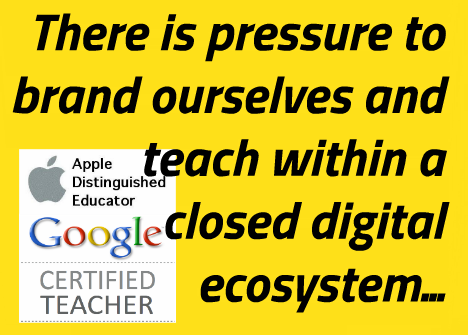 Here’s the PREZI of the presentation:


What’s In Your eteacher Digital Toolbox?  Prezi of the presentation.
The crowdsourced links to diverse digital tools that our presentation assembled for your enjoyment…

I’ve finished Crawford’s The World Beyond Your Head, and I’ve been ruminating on it for a couple of weeks.  Crawford makes a number of educational criticisms in this philosophical treatise that attempts to free us from Enlightenment thinking gone mad.  This post is on how digital economics amplify and feed off our sense of self.

Crawford’s historical argument is that the Enlightenment rejection of authority has been amplified by neo-liberal values and digitization, turning what was once an early scientific rejection of church authority (rationality vs. superstition) into a sort of hyper-individualism that rejects obvious facts about reality in favour of opinion.  In our modern world opinions have the weight of truth, the irony being that the Enlightenment push to free people from authority has enabled individualism to such a degree that it is now ushering in a new era of superstition.

This person-on-a-pedestal is happily embraced by modern marketing which will go to ridiculous lengths to emphasize just how individual you can be if you all buy the same thing.  The modern, insulated self is also coddled by digital media designed to cater to your every whim.  Whole worlds are made where people feel they are accomplished because they followed the script of a game.  Ask any student, they self-identify with their social standing in game play, yet their greatest achievements don’t actually exist.  The scripted interactions in gaming lead many people to believe that they’ve done something other follow a process they were supposed to complete.  You can never win a video game, you can only finish it, like a book.

Crawford uses the example of Disney’s original cartoons in comparison to the modern Mickey Mouse Clubhouse to emphasize this change in how we (teach our children to) approach reality.  The original cartoons emphasized the tension between what we want and what reality demands with characters battling the elements, often with machines that don’t work as they’re supposed to.

The modern Disney playhouse teaches children an almost deified version of technology.  The machines are psychic, performing their functions perfectly before you even are aware that you need them.  Any problems are resolved by the machines, there is never a question of them not working.  Classic Mickey can often be seen repairing broken machines, modern Mickey is permanently happy as the machines resolve every problem that might arise, it almost plays like an Apple ad.  Digital environments designed to cater to your every whim… sounds like the perfect twenty-first century learning environment.

Gamification in education tends to play much like Mickey’s Clubhouse, offering an experience so safe that it’s virtually (pun intended) meaningless.  When you can’t fail, you can’t succeed.  When you’re following a script instead of self-directing your learning, you’re not really learning.  I’m a massive fan of simulation, even digital simulation, but gamification isn’t that.  In my simulations students often fail.  If they didn’t, it wouldn’t be a worthwhile simulation.  What I hope the simulation does is give them the space away from worldly cost concerns to experiment and try more radical approaches.

When I was a younger man I played paintball a fair bit.  When I played, I often tried to live out silly movie fantasies.  I wouldn’t have done this with real bullets, but in paintball it isn’t for real, right?  One time I left my gun behind and ran straight to the other team’s flag, grabbing it and legging it while they were all standing around getting their defence set up.  I didn’t even get hit because no one was ready.  Another time I tried to do the Arnold-Terminator thing, walking down a road, slowly taking aim and shooting people and ignoring the fact that they might get me back.  I shot six people before someone calmed down enough to get me. When they play paintball, most people run and hide like it’s real.  They do the same thing in video games, camping or hiding even though the entire thing is bogus.  If simulation becomes real in the mind of the user, it ceases to have the same effectiveness as a learning tool; just ask Kirk.

Pedagogically, educational technology suffers from much of the same marketing creep as Mickey’s Clubhouse.  It often tries to do too much, but it’s also infected with attention grabbing nature of the digital economy it’s derived from.  The software we use in education is derived from platforms designed to ensnare attention for as long as possible in order to make money from it.  In an economy where nobody makes anything, the only value people have is as consumers.

Crawford goes into detail about how we don’t have a digital technology attention issue, we have a digital economics issue.  Machines are designed to keep user attention because the economy that profits from it made them that way.  We build machines to ensnare user attention (familiarity helps this, it’s why education is ‘given’ tech ‘for free’).

We children of the Enlightenment, having freed our minds from superstition and social authority by amplifying individuality, ushered in scientific and industrial revolutions.  The Enlightenment championed democracy rather than the mystical divine right of kings, but something insidious latched on to that democratic push.  Democracy became democratic-capitalism and now we’re saddled with an economic system that is happy to make use of the individualism championed in the Enlightenment.

Digital technologies latch on to our already amplified sense of self, multiplying it and allowing us to exist beyond the constraints of the real world (at least until there is an internet or power failure).  As long as that comforting digital blanket is wrapped around our minds we are free to believe whatever we want (the internet will provide proof).

If you feel like there is something wrong with how we’re doing things, Crawford’s challenging book will give you the philosophical latitude to do an end-run around this mental trap that’s been centuries in the making.

Watching how people drive cars is a study in their true nature.  In a car, much like being online, people feel anonymous and powerful.  They are less fearful of physical response and more likely to be adversarial, aggressive and greedy.  After driving a couple of thousand miles in the past week down and up the crowded east coast of North America I’ve a clearer idea of just how confused we are in this era of human/machine symbiosis.

Last night as we pulled into a parking lot after a long day of driving, a man backed out of his parking spot without so much as a shoulder check and almost t-boned us.  When we yelled for him to watch out he became incensed and started screaming back about how it was our fault that he almost ran into us.

This was an interesting reaction.  Had he walked into someone on the street he probably would have apologized and backed off, but in his car he immediately went on the offensive, like a small dog barking at someone from behind its owner’s legs.

People do this online all the time, it’s called flaming or trolling.  They shoot their mouths off without fear of consequence.  Technically this is called the Online Disinhibition Effect; an abandonment of social restrictions and inhibitions because people feel insulated by their anonymity online.  They experience the same false sense of empowerment while driving.

There seems to be a dishinhibition effect whenever people identify themselves through technology.  This is very odd because human beings are almost always the weakest link in any vehicle being driven or computer being operated.  That they hide their inferiority in the power the machine is truly perverse.

Driving out of Virginia Beach on the worst designed freeway I’ve ever been on we were stuck in stop and go traffic for the better part of an hour while people blasted up the clearly marked merging lane to pull in at the front of the line.  Their behavior was what was causing the slowdown, though they were the ones most angered by it.

The police ended up pulling up to the front and ticketing people who were driving up the shoulder to further slow down the flow of traffic.  People weren’t just making use of  the merging lane, they were pulling out into it to pass everyone else and further compress traffic.  In their cars these people are immediately willing, in front of a large audience of their peers, to ignore everyone’s best interests in order to serve their own ends.  I recently saw a link to self-driven cars and how they will be arriving soon; they can’t arrive soon enough.  Human beings aren’t capable of acting in everyone’s best interests, machines are.

I’m about to return to the classroom and teach students how to make effective use of technology in their lives, but there is virtually no examination of the effects on human psychology by these technologies.  I see it every day when students do inappropriate things online and are then astonished that they are reprimanded for it – they are used to online spaces being a free-for-all, the wild west.  Where they actually are is in a virtual place that is recording their every action.

Whether it’s on the road or online we increasingly identify our selves and our abilities through the machines that enhance us, but the motive power of a car or the communication reach of online tools are not ours to claim, we are merely the ghosts that inhabit and direct these machines, and many people do so poorly without any idea of what they are, how they actually work, and (as a result) how to make them work to best effect.

Humility, civil interaction and a clear sense of our limits seem to be the first victims of our increasingly virtual sense of self.  That so many of us, especially younger people, are wallowing in these delusions does not bode well for the future.  Technology should offer us insight into our selves, instead we are using it to hide our deficiencies.