In a previous life I was an automotive technician and then service manager at a Quaker State shop.  For a few years there I was right up on my lubricants.  That background makes me very conscious of my motorbike fluid habits.   One of my standing rules when I put away a motorcycle for the winter is to change the oil before I do it.

You watch someone like Nick Sanders ride up and down the Americas for tens of thousands of kilometres and you wonder how his Yamaha looked like it had barely been used at the end of it:


Engines are designed to be running.  The very worst thing you could do is start and stop an engine over and over again (like we all do every day).  In the case of Sander’s epic rides from Alaska to Argentina and back, while what the Yamaha did was astonishing, the fact that the engine was in good shape shouldn’t have been a surprise.  It was barely ever allowed to cool down.

Oils become acidic and moisture seeps in as things continually heat up and cool down.  Leaving old oil in your engine over the winter isn’t doing it any favours.  Swapping out contaminated oil for clean oil before you put it away is a great idea, so your engine isn’t soaking in the bad stuff.

Swapping it again in the spring is just a waste of money.  Oil doesn’t go bad sitting, but once you’re into the heat up cool down cycle again keep an eye on your mileage, and keep up on your oil changes, your engine will appreciate it.

Dave Hatch’s Motorcycle Experience is doing a series on how to store a motorcycle over the winter (or for any extended period).  The first bit is on how to prepare and look after your tires while the snow flies outside:

So, make sure they are clean and at maximum pressure when you put the bike away, and move the bike every once in a while to prevent the tire from settling on one spot.  It was interesting what Warren Milner, the tire expert, said about what super sticky sport bike tires can do in extreme cold.  It’s an issue with all super sticky tires evidently. 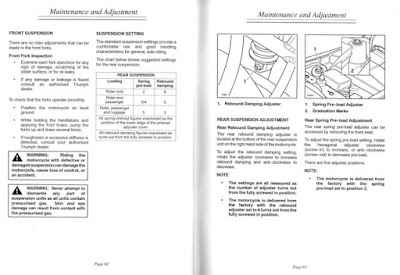 I’ve never monkeyed with the suspension on the Tiger, but since I’m a 250lber and I ride 2-up with my son who’s an easy 130lbs, I thought I’d look into setting the suspension before our 1500km round-Huron trip.

A kindly Dubliner on Triumphrat had a copy of the owner’s manual page that explains how to set the Tiger’s rear suspension.  A two-up loaded bike should be spring pre-load set to the highest setting (5), while the rebound damping should be set three clicks out from all the way in. 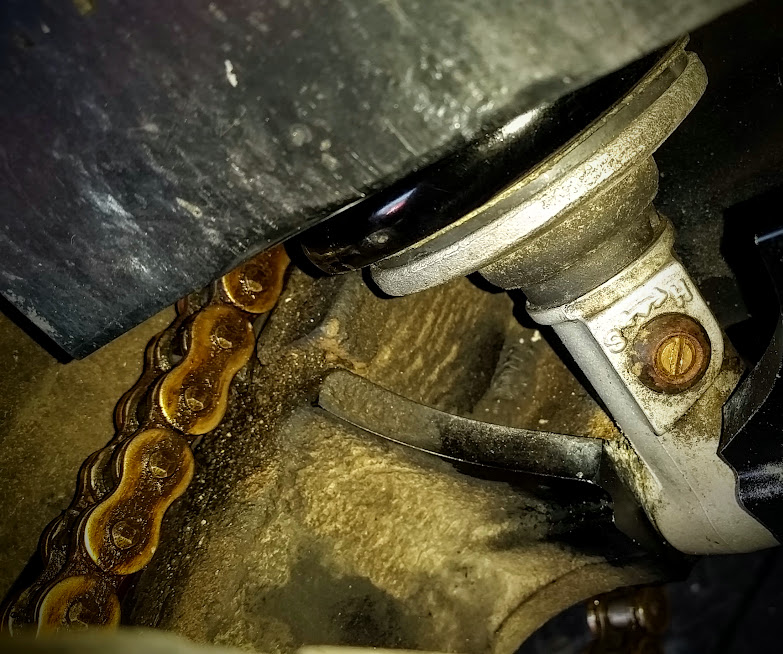 Making the changes was pretty straightforward.  The spring pre-load adjuster is easily accessible under the seat.  The numbers on it are bit tricky to see, but you can quickly set the pre-load to the desired setting once you find them at the bottom of the cylinder.

The rebound damping adjuster is at the bottom of the shock and easily accessible.  Turning it in until it was snug was straight forward and the clicks are loud and easily detectable.  Turning it out three clicks was an obvious process.

I took the bike for a ride today to get gas and prep for the trip.  It feels firmer, less bouncy and taller than before.  I’m enjoying the change.

Once back I set the tyre pressures to 36psi front and 42psi back and looked over the tires for any issues.  I’ve spent the rest of the day packing as if for a portage canoe trip (packing for a long bike ride is similar).

While out and about I stopped in at Two Wheel Motorsport and picked up an Airhawk.  I’d been thinking about getting one anyway after the nasty case of monkey-butt I got riding it to The Bruce last week.  The gel pad I was using gets moved to the pillion seat, so everyone gets a seat upgrade.

Airhawk pricing is a bit baffling.  The tiny dual-sport seat (11.5″ deep x11″ wide) cost $230, the much larger medium cruiser seat pad (14″ x 14″) costs $148.  We tried out the medium cruiser sized one and it fit the Tiger seat better anyway, so I saved myself eighty bucks and purchased the larger pad. (?)  I’ll give an update after I put an intensive 1500kms in unbelievable heat on it.

While I was under the seat I found the height settings on it, so I moved it up one from minimum.  It might quickly find its way to the top setting, but middle with the Airhawk has already relaxed my knees dramatically, just in time for a Great Lake ride-around. 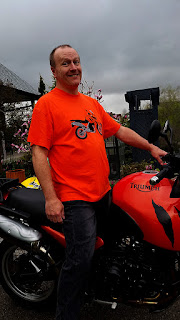 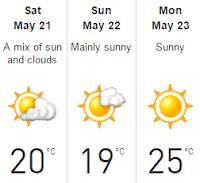