Originally posted on Tim’s Motorcycle Diaries back in the Ninja days of September, 2013

Other riders I know are talking about putting their bikes away already, I just can’t bring myself to do it.  Riding in the cool autumn air as the leaves turn around you?  How on earth can you put a bike away with that going on outside?

Today I was off work for a periodontist torture session, so when the day broke sunny and cool I jumped out for a ride before the terror was to begin.  Rather than ride the barren agricultural desert of Centre Wellington again I made a point of aiming for some of my favorite geography. 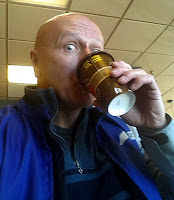 The road north east out of Fergus through Belfountain is nicely winding as it follows the Grand River.  The twists continued through Grand Valley where the road drops right down next to the river.  North to Shelbourne takes you through a science fiction landscape of massive windmills.  The blast down 89 into Shelbourne had me looking at the fuel light so I pulled in for gas and then stopped for a coffee.

I’m bad at looking after myself when I get going, I tend to push on rather than take the time to stay warm and charged up.  After a quick coffee I saddled up again and pushed on up 124 to Horning’s Mills.  Located in a river valley north of Shelbourne, Horning’s Mills has the feel of a place that time forgot. 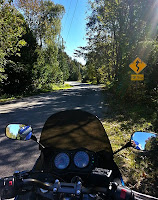 I have a theory that when the geography rises up around you and blocks you off, all the the psychic static from those anxious, frustrated people in the GTA is deflected away; River Road out of Horning’s Mills feels wonderfully isolated and far from the world.

We’re probably still a week or two away from the fall colours, but the ride was gorgeous. It was getting on toward noon and the sun had finally warmed everything up.  In keeping with my look after yourself on a ride theme I brought a fleece sweater that I put on coming out of Fergus and three pairs of gloves, to try and find the perfect set for the cold air.  I ended up switching to the winter leather gloves after the warm up coffee and was glad for them.

With the first colours in the trees, crisp, cool air and a road that was very un-Ontario like in its bendiness, the warm and eager Ninja thrummed down the road with an urgency that washed away every care.

The ride south on Airport Road, usually a quick road with big elevation changes, was horrible.  There was some kind of grey hair convention going on, and combined with the construction, the ride was a disaster.  Rather than trying to pass every pensioner in a beige Camry in Ontario, I ducked right through Mono Cliffs and over to Highway 10.  While not as geographically exciting, Highway 10 did offer two lanes, and even though trucks were determined to drive side by each in them, I was able to flit through Orangeville and south to the last bit of interesting road on my trek.

The Forks of the Credit is a short bit of winding road that follows the young Credit River as it flows out of the Niagara Escarpment.  Once again construction ground things to a halt, but the crazy 180° hairpin and constantly twisting pavement reminded me of how a road can talk to you, especially through two wheels.

By this point I was getting pressed for time to get back to Guelph for my torture session so I opened up the Ninja and hit Highway 24 through Erin and south to Highway 7 past Rockwood before ducking in to Guelph just south of the University for a quick lunch and then the blood letting. 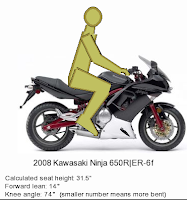 The ride did a couple of things for me.  Taking longer trips I’m finding the Ninja remarkably easy to sit on for extended periods.  The seat is comfortable, the handlebars fall to hand and the bike is a joy to ride, it really wants to go.  What’s getting me are the pegs.  Being as swept back and high as they are, my knees don’t enjoy being folded up like that for long periods.  I find myself standing up on the pegs and resting my legs on the front frame sliders just to try and work out the kinks.  That 14° lean angle I could live with, but the 74° bend in the knees just isn’t working for me.  Being long in the torso I also get a chest full of wind even with a larger, aftermarket windshield on the Ninja.

Having said that I covered about 230kms in between four and five hours with a few stops here and there, so it’s not a show stopper.  There are other bikes that would fit me better, but I’d miss the Ninja’s friskiness and eagerness to connect and become a single entity.  I’m afraid that something that would fit me better would be heavy and dull by comparison.

If you’re thinking about putting your bike away, wait until the end is nigh and the snow is about to fly.  You never know when that perfect autumn day is going to suddenly appear in front of you and give you a ride that you can keep in the back of your head all winter long.  Yesterday’s ride, complete with sore knees, wind burn and cold hands was a revelation.