Jeff, the motorcycle Jedi, is crossing Canada with his lovely wife on a Honda Goldwing.  They leave shortly and we get to tag along on the first day!  We’ll accompany them to Massey, Ontario and over to The Sault the next morning.  They then continue up over Superior on their pan-Canadian odyssey while we cut south over the border into Northern Michigan and hug the shore of Lake Huron before popping back into Southern Ontario in Sarnia. 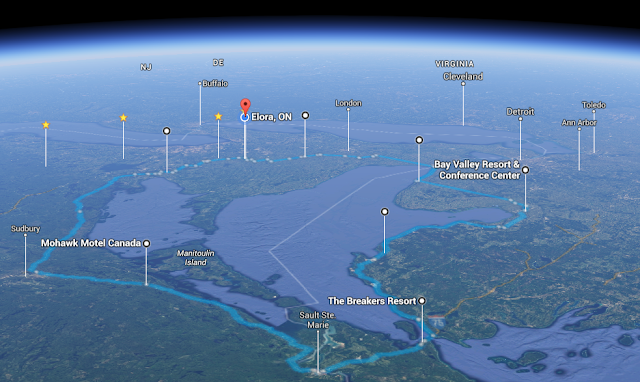 While Jeff and MA are heading west for days on end, we’ll be wandering through Hemmingway’s Michigan before arriving back home.  This’ll give me my second great lake circumnavigation (or maybe my first real great lake because Georgian Bay is a bay). 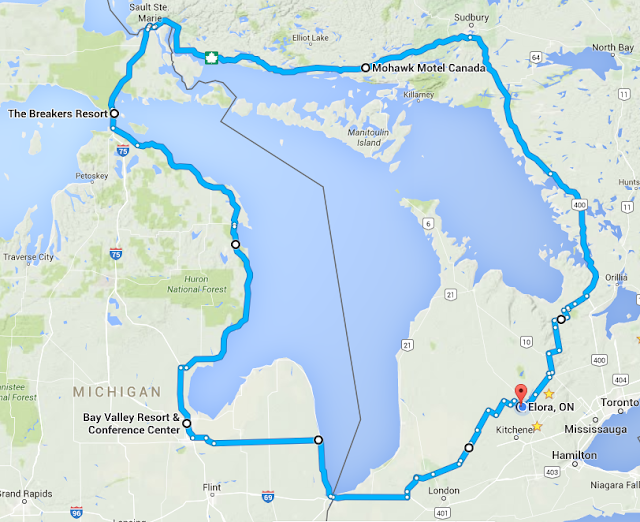 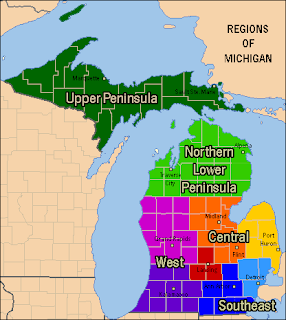 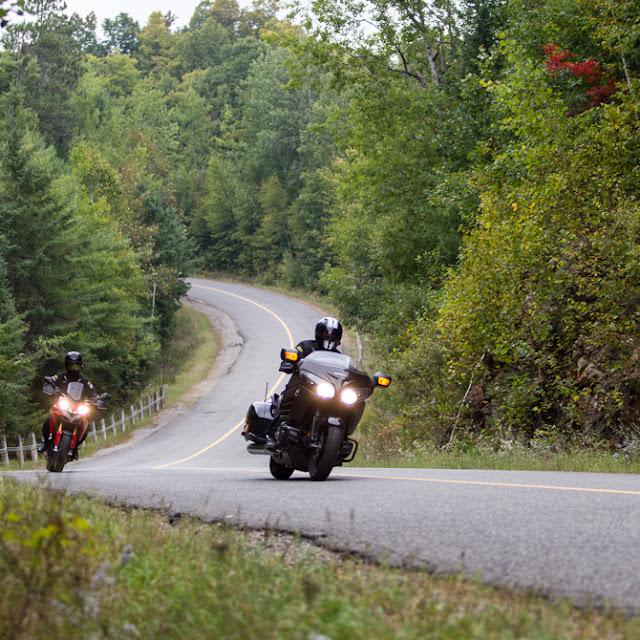 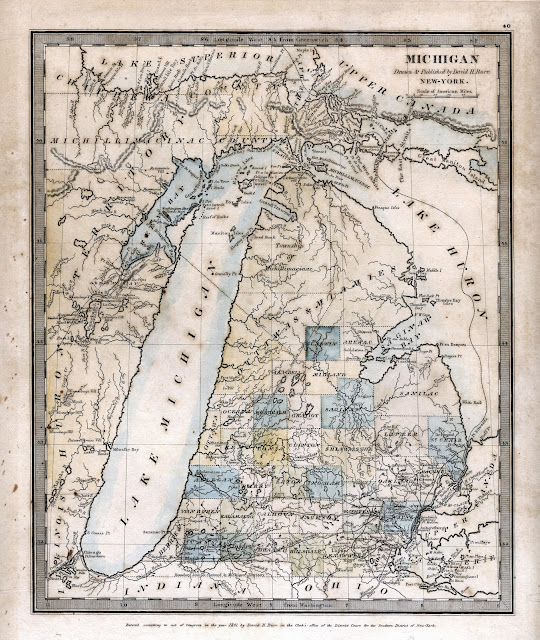 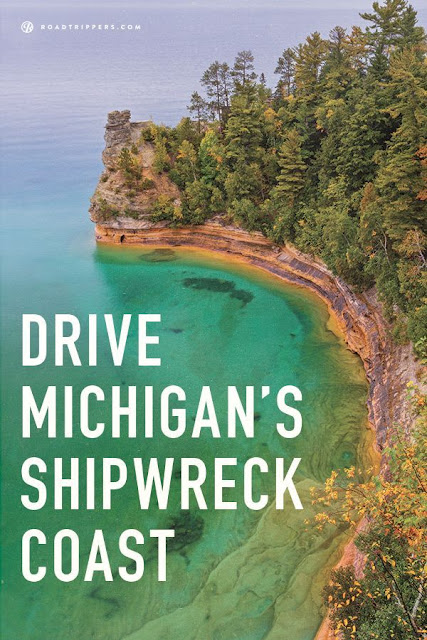 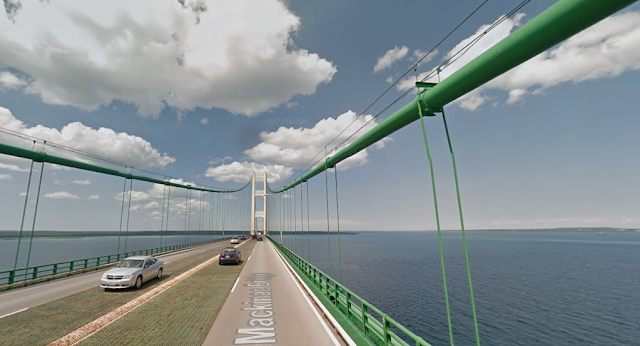 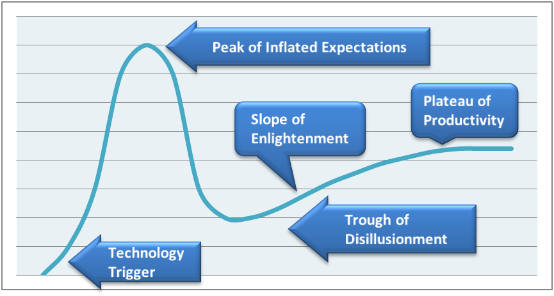 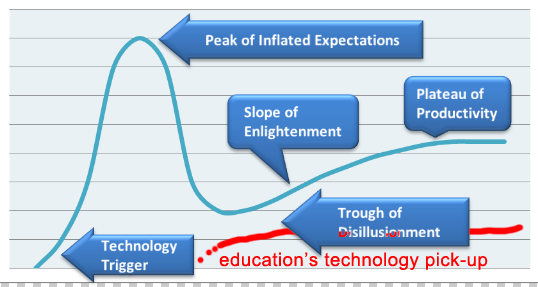 We’re looking at a few days in The Thousand Islands at the end of Lake Ontario before my wife goes to a conference and my son and I head home.  Fortunately, between here and there lie some of the best riding roads in Ontario.  I finally get a chance to Ride the Highlands! 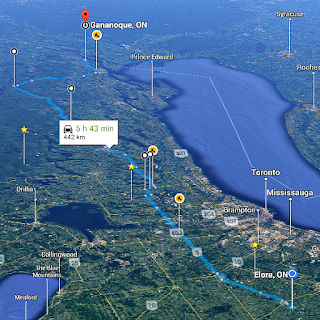 The ride out is going to be an avoid the GTA at all costs exercise (like most things are).  Other than getting pinched in Newmarket, it should be a straight shot across the top of population.  Port Perry is nice and once I’m past Peterborough, Highway 7 is a winding ride into Canadian Shield.

Where I drop off Highway 7 at Mountain Grove and cut down to the godforsaken 401 looks like a roller coaster of a road.  A quick blast (no such thing any more) down the 401 should finish the trip at Gananoque where I’ll meet up with the family and we’ll hang out for a couple of days. 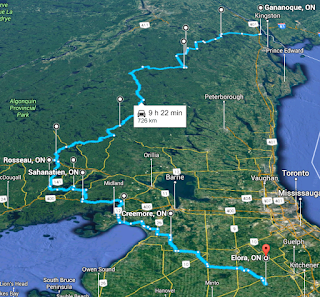 The Ride Back is an even greater attempt to avoid the GTA, but this time with a find the twisty roads vibe.  Using ridethehighlands.ca I linked together a series of suggested roads to get my son and I back to South Western Ontario in the lest efficient but most pleasurable manner possible.

We meander north west from the east end of Lake Ontario before finally cutting south around the end of Georgian Bay.

If we leave Tuesday morning, we’ll overnight somewhere around Haliburton before finishing up the ride on Wednesday.

All told it should be about 1300kms of riding some of Ontario’s best roads.

Elora to Creemore to Owen Sound to Lion’s Head to Oliphant and back home again in about 30 hours.  We started out as three and expanded up to seven at one point before finishing with the original three again.  It’s amazing how much you can get done in a day…

Photos and video done on a Ricoh Theta 360° camera and my Samsung S5 smartphone. 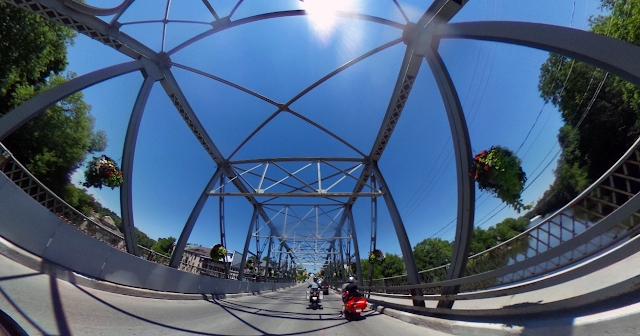 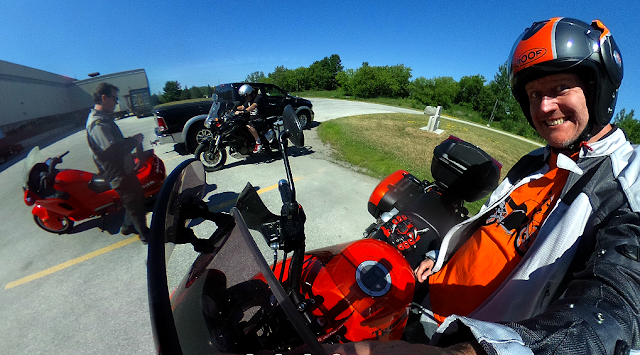 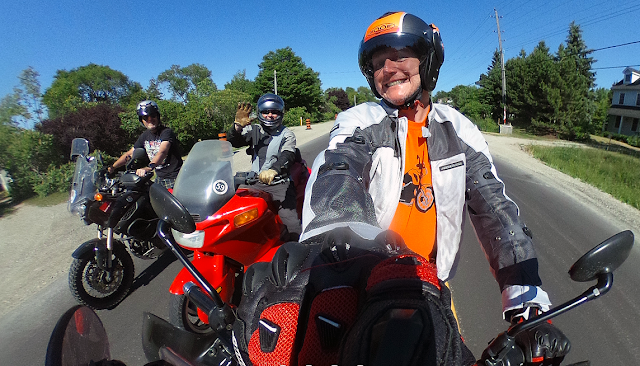 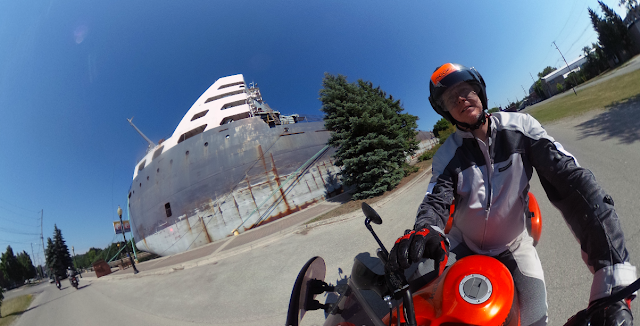 Some other shots from the smartphone… 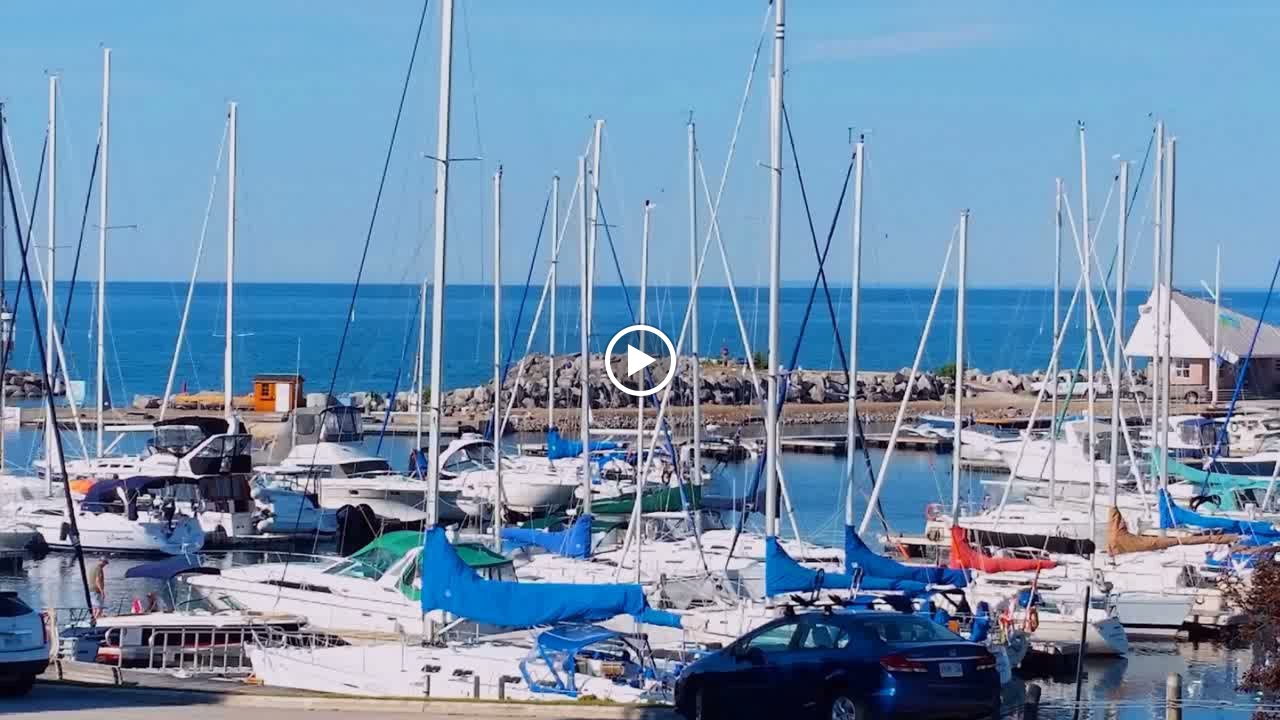 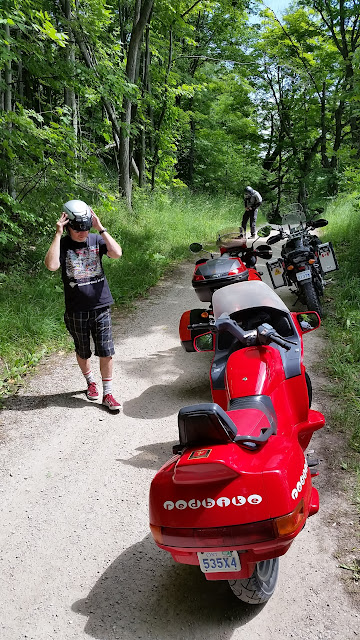 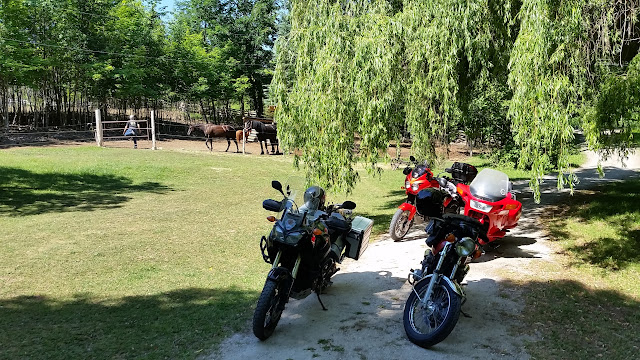 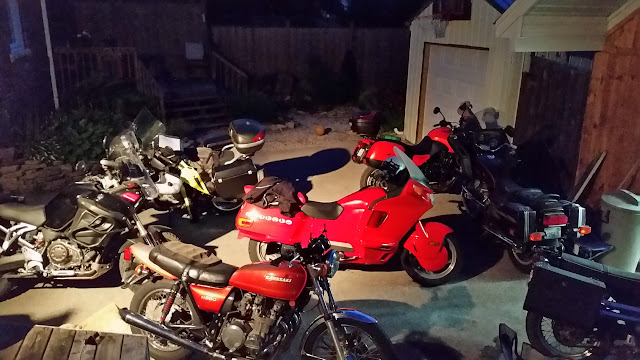 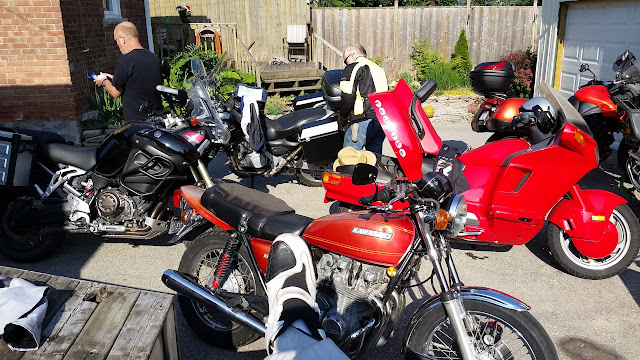 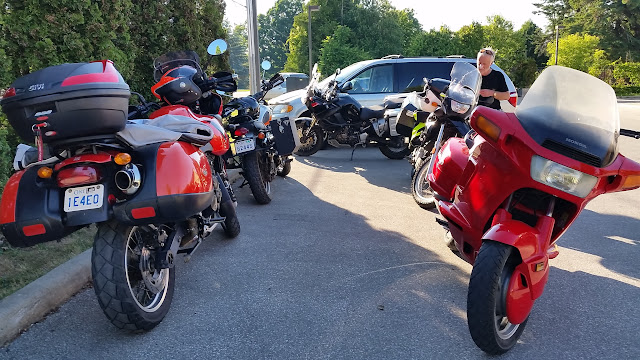 When I’m packing up the computer lab at the end of the school year I usually do it imagining that I won’t be back.  For an introvert like me, teaching is an exhausting business.  I don’t get recharged by people the way others seem to; people drain me.  The thought of disappearing out the door and not returning is a happy one.

As the year wound down I came to realize that information technology has become like plumbing or electricity: no one thinks or cares about it unless it doesn’t work.  Fortunately I’m good at IT and get a a lot of satisfaction out of solving problems in it (not to mention my staying sharp in technology allows me to teach it better), so even though it is nothing I’m contracted to do I still beaver away in the background trying to create a more accessible, current and consistent educational technology platform for our teachers to use.

I find the year end back slapping tedious at the best of times.  Everyone gets well paid to do their job and no one I know in the building stops there, but what some people do above and beyond is considered more important.  While some were having meetings and planning presentations, I was hand bombing over a ton of ewaste out the back door of the school to a local charity.  They have DD adults dismantle electronics and then make enough recycling it to pay for their charity work.  It isn’t attention grabbing, but it matters.

The energy other people are willing to spend in order to shine a light on themselves obviously pays off, I’m just not interested in it.  Fixing things that are actually broken holds much greater interest for me.  Changing people’s minds is exactly what I don’t like doing.  People should be able to make up their own minds based on the facts, not on how convincing I am.

This year has offered me some wonderful moments.  By far the most positive experience was our run at Skills Canada this time around.  Seeing my student’s surprise at winning provincials and then our experience at Nationals was awesome.

Another powerful moment was seeing software engineering actually produce viable projects this time around.  That class offers students a chance to experience team based software development and then publish code while still in high school, and it has improved dramatically year on year thanks to a lot of curriculum building.

The least professionally rewarding part of my year was participating in the school leadership team.  The work done seemed pointless and time consuming, and seemed to follow a predetermined process rather than actually being creative and meaningful in any way.  A colleague dropped out of leadership a few years ago and she claims it frees you up to spend your energy on more productive things.  I think I’m following her approach when my headship ends this year.

The summer is for finding my mojo again, and then refocusing on what works best for my students in the fall.  A list is already forming:

But first, some summer…

Note:  I usually write a draft, edit it once and then publish it on Dusty World.  This got heavily re-written three times with an eye to repairing problems rather than just complaining about them.  The end of the school year often gets me into a rather negative state of mind.