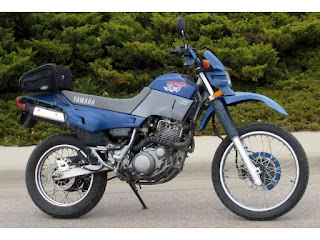 The Dakar has me all dual sport fixated at the moment.  To pass the never ending Canadian winter I’ve been looking up hard to find bikes and then seeing what it would take to go get ’em.

For $3000US there is a Yamaha Ténéré for sale at the Power Brokers of the Black Hills out in South Dakota.  That’s a capable dual sport named after part of the original Paris to Dakar race.

The cunning plan would be arrange to pick up the bike in the spring.  It’s a few hundred bucks to fly out to Rapid City.  It happens to be right by the Black Hills and Sturgis where the big Harley thing happens.  I’ve got no interest in that, but the Hills are supposed to be lovely riding, and only four hundred miles west is Yellowstone.  I’ve always wanted to see the mega-volcano that will eventually wipe out most of the human race.

After hitting Yellowstone it’s a long arc back to the east.  That isn’t what the Ténéré is about, but if I did it focusing on back roads and trails, it’d be an interesting way to find my way home.


It’s over 700 miles east before I get to Deluth on the west end of Lake Superior.  From there it’s still a long way home.  In previous dream rides Deluth has been the apogee of around the Great Lakes rides.  This time it would be the half way point on a long ride east.

The legendary Austin Vince put out the video below about this year’s orienteering trail rides in the Pyrenees in northern Spain:

Come map reading and trail-riding with me this summer. Watch this film with the sound up and note that the early bird offer ends in a week. This one is for Tim Kent and Del!
Posted by Austin Vince on Friday, January 12, 2018 If there was ever an excuse to load up a shipping container with old enduro bikes and send it to Europe, this is it.  The Twinshock Trailfinder is a two day event that focuses on older bikes (with twin rear shocks).  I’d dig up four old XT500s, clean them up and have them ready to go, in team colours.

Some soft luggage would make them as touring ready as they are going to get while keeping everything as light as possible.  The Trailfinder event starts on June 6th in Tremp, Catalunya, Spain and runs until June 8th.  An option is to container the bikes over to Antwerp, Belgium.  It’s a two thousand kilometre ride if you go the pretty way around through the Alps down to Spain.  Two thousand kilometers on thirty-five year old enduro bikes is pretty hard core, but that would kind of be the point.

If the container got into Antwerp mid-May, we could get them sorted out and on the road by May 21st.  We could then wind down through Belgium, Luxembourg, Germany, Switzerland and France before reaching Spain.  At 300kms a day that’s a seven day trip.  With a couple of days off in there to explore, we could roll into Barcelona at the beginning of June and get the bikes sorted at the Yamaha Motor Centre before heading up to Tremp the next week.


Rather than get all GPSy with the ride down, we could do it all with survey maps like the ones used in the Twinshock Trailride.  By the time we found our way to Spain we’d be very familiar with how European survey maps work and would be able to find our way around without looking like lost North Americans. After three days of trail riding with THE VINCE in the mountains, we could then spend an extra week getting better at it now that we’ve had a pro show us the ropes, maybe with some Jo Sinnott style wild camping in there.

When we’re all done we could find some storage for the bikes and park them up, waiting for the next time someone needs to go trail riding in Spain.

Digging up old, twin shock enduro bikes is tricky, especially in the icy wastes of Canada where old machinery quietly rusts away under the snow and salt.  Ten years in Canada is like thirty anywhere else.  Looking country wide, the only XT500 I could find was in Victoria BC, over four thousand kilometres away. Expanding the search into The States means I might be able to find non-rust belt bikes that have had easier lives.  Unrestored but road worthy bikes look to be about two grand.  Restored bikes go for over three thousand.  There is one in North Carolina, and one in Mesa, Arizona.  With some some searching and a US broker I think I could collect together four road worthy or thereabouts XT500s for under ten grand, and then spend some more prepping them.

If I started now I could probably have the bikes at hand by the end of February and then spend March sorting them out.  April could be spent breaking them in and shaking them down for any last minute issues.  They’d be shipped the end of April to show up in Antwerp when we needed them. October 24th, 2014 there was a partial solar eclipse at sunset up our way.  I was on the rear deck with the Olympus PEN EPL3 watching it go down.  All shots with the long 300mm zoom lens.

Typical shot data looks like this:
f/22 1/4000150 mm ISO1000 for the lower light shots and similar settings with wider aperture for the brighter shots – I’d rather everything stay sharp with as big an F stop as I can manage.  No filter, believe it or not.