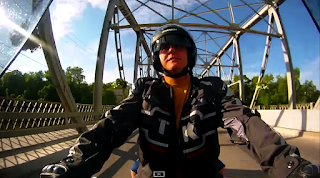 My most comfortable helmet is the cheapest one I’ve bought.  That Hawk open faced helmet from Leatherup.ca is a simple device with barely any padding in it, yet I can wear it for hours without any pressure points.  It’s a flip down, open faced lid with a built in sun visor, but it solidified for me my preferred helmet type – the open faced, modern helmet.  You can get out of the wind with the full face visor, or just use the sun visor and enjoy an unencumbered view of the road.

With the open faced thing in mind, here are my latest helmet dreams, but they ain’t cheap (or easy to find in some cases):

I’ve still got a huge crush on these French helmets that you can’t get here.  I’m going to have to take a trip to the south of France just to pick one up.  The orange Desmo on the left has an A7 Corsair vibe to it that I dig.  It still looks like the perfect helmet: an open faced helmet that can transform into a fully safetied full face helmet when needed without having to carry around bits and pieces with you.

Price?  No idea, you can’t buy them in North America and the former distributor hasn’t been forthcoming with where to get the last ones in-country.  These guys have it for €469 ($649CA), but then there will be shipping and customs fees.  I’d be the only one I see on the road though.

Schuberth just came out with a new version of their open faced helmet.  Once again, these aren’t everywhere, but they are a heck of a lot easier to find than the Roof.

Compared to the French jeux de vivre in the Roof, you get some pretty German meh when it comes to style, though I bet its engineered to within an inch of its life.

Price?  $680 from a trusted source, canadasmotorcycle.ca

Wired did an article on these many moons ago.  Also a modular helmet, but rather than the Roof’s elegant hinge, you end up with a handful of bits when you want to go open face.

It still has a neo-tech look to it that I like, though their webpage is a bit of a pig (my laptop is in overdrive trying to make sense of it).

Price?  Good question, NEXX Canada doesn’t appear to offer the X40 for sale.  You can find them for sale in the UK for £249.99 ($484CA), but you also facing those shipping and customs costs. 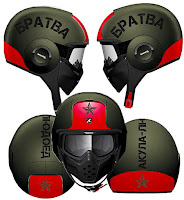 An open faced helmet that comes with all the bits and pieces to make a closed lid if you so wish. It also lets you live your Clint Eastwood Firefox dream.

The Soyouz is also made by a much better known and distributed manufacturer than some of the dodgier off-shore helmets I seem drawn to.

Price?  $299 in Canadian dollars with free shipping and no customs surprises from motorcyclesuperstore, a trusted source who go over the top to make sure you’re happy with your order.  If they go on sale, I might not be able to help myself.

Since I was solo on the circumnavigation of Georgian Bay I brought along some gear to capture the moment.  I prefer photography.  I think a good photo is an entire world you can get lost in, and unlike video it isn’t forcing you to follow along frame by frame.  In a photo you’re free to wander with your eyes in a non-linear way.

Having said all that, I brought along some video gear to try out on this trip.  I’d love a GoPro, but since they cost almost as much as my bike did, I got a cheap Chinese knock-off instead (and a cheap knockoff it is!)  The Foscam AC1080 takes fantastic video (full 1080p) and decent photos (up to 12 megapixels), and at only about $140 taxes in, it’s less than 1/3 the price of a GoPro.  Where it falls apart is in the fit and finish.  In a week of what I’d describe as gentle use for an ‘action camera’ the buttons never lined up right with the unit inside the waterproof case (I ended up having to remove the camera to start and stop it), the case itself was so rickety it would just blow over in the wind (the GoPro has a ratchet in the stand that locks in position, the Foscam is just a plastic screw), and the case itself snapped at the base after only a few uses.  It also gets uncomfortably hot when it recharges.  I have some concerns about the physical capabilities of this ‘action’ camera.


The other shaky part of the Foscam is its operation.  You can start it up and it’ll stop again for no apparent reason (though this might have to do with convoluted options buried in menus).

You might think the GoPro lacking in options, but it has very streamlined operation and always gets what you’re filming (which is vital in action video), and it does it without an LCD or menu options buried three deep.

The Foscam also saves in a .mov file format which Sony Vegas seems determined not to render properly.  If you can get past all that frustration you can get some very nice video out of the Foscam:

… and you can find you’ve got nothing because it shut off just when you were about to do a one time thing:

A quick video of the boarding of the Chicheemaun ferry in Tobermory – why did I take it from the Olympus Camera around my neck?  Because the Foscam shut off for no apparent reason just as we were about to board.  But hey, when it works it makes nice pictures.
The go-to camera was my trusty Olympus Pen.  This is the best camera I’ve ever owned – a micro SLR with swappable lenses and full manual control.  It also takes video in a pinch.  This camera punches well above its weight.  If I were to pony up for something better, it would be an Olympus OM-D that takes the same size lenses, and then go on a lens hunt for some macro and telephoto madness.

Also on this trip I brought along a Samsung S5, which takes nice pics and decent video.  Smartphone cameras have gotten so good that I don’t think about point and shoot cameras any more, they are redundant.  My only regret is not picking up the bonkers Nokia Lumia 1020 with it’s massive camera built in, but then Telus didn’t have it.

I’m not really through with the Foscam yet.  Once I’ve got it worked out, hopefully I can still use it to get some quality video off the bike.  The other day we were out for a ride so I decided to focus on getting some audio instead.  Yes, riding a bike really is as fun as this sounds.  I’m going to look into making some finer audio recordings to catch the sound of riding, it’s a different angle on motorbike media.

Over the summer I plan to look into more advanced 3d modelling and micro-photography as well as maybe some drone work.  I’m looking forward to pushing the limits with motorbike media creation. 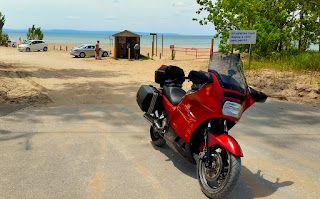 I’m back after a day and a half marathon around Georgian Bay.  Just over 900kms including 50 on a ferry, and I’m beat!

I left at about 8am on Saturday morning and struck north west toward the Bruce Peninsula.  The farms were pretty in the morning sun but soon got pretty repetitive.  I find Southern Ontario quite tedious with few curves through never ending farm deserts, I was looking forward to getting up onto The Bruce and feeling like I wasn’t local any more.

It was a cool, sunny morning and I stopped for coffee and a fill up at the Shell in Hanover.  Putting on a sweater I continued north when suddenly my otherwise rock-solid 21 year old Kawasaki Concours started hesitating at part throttle.  It was annoying but not trip destroying.  I immediately began to suspect that Hanover gasoline.

Soon enough I pulled into Wiarton, the gateway to the Bruce, and got myself a warm sausage roll and a very nice (not gas station) coffee at Luscious Bakery & Cafe on the main street; it’s a great place to stop before riding onto the windy Bruce Peninsula.