I got a Structure 3d scanner this week at work. We’re using it there for all sorts of educational activities, but I find myself painting the various Kawasaki products in my garage.

This thing costs about $350 bucks and straps on to an ipad.  You walk around your target ‘painting’ it on the ipad screen (it looks like you’re covering it in clay) and then you’re done.  Any of these motorcycle models took about a minute of walking around the bike… 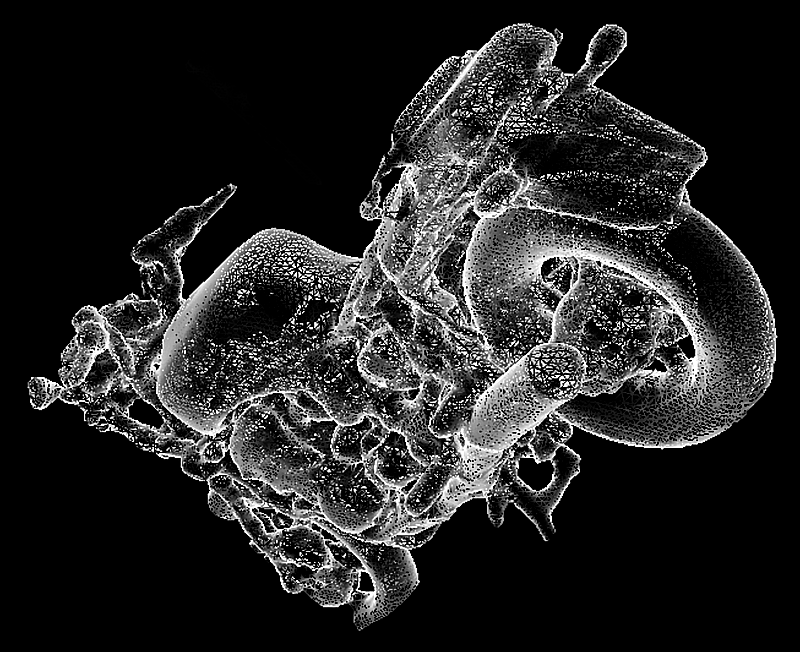 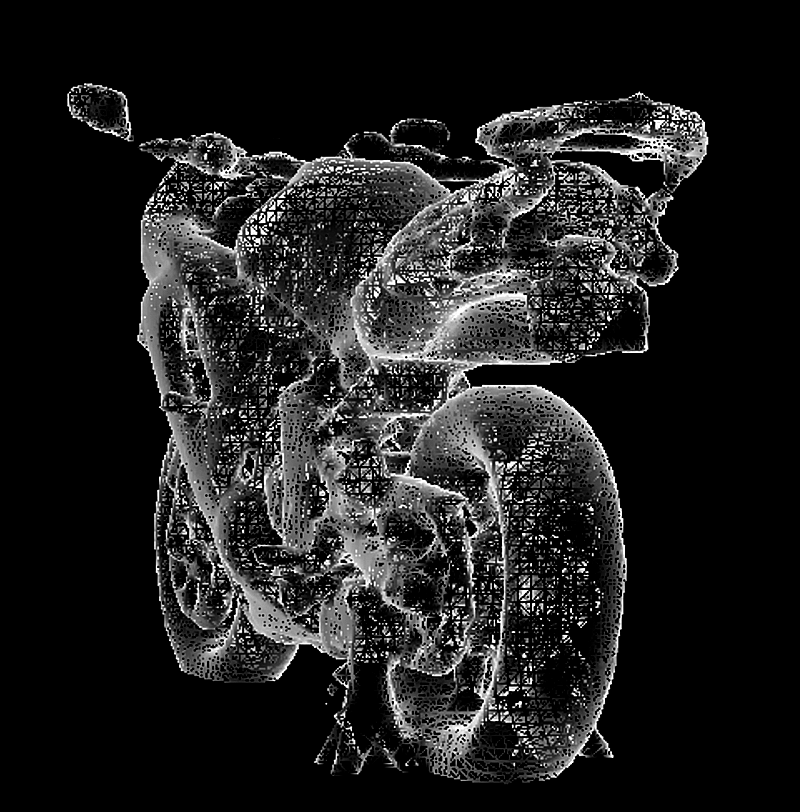 Because it’s so easy to paint an object and create a 3d model out of it, you tend to try all sorts of angles. The scanner will also take a swing at rooms, though I’m not so good with them yet.  This is an image of the garage.  The Ninja is on the left, the Concours is further in on the right.

The file generated is basically a list of vertices connected by lines.  The sensor measures distances and constructs a 3d mesh out of them.  The result is a three dimensional image.

You could scan a fairing or other part, get accurate geometry out of it and then modify it digitally before printing out a replacement.

Seat Model by timking17 on Sketchfab

I think I’m about five years away from being able to 3d print my own digitally modelled custom fairings for any bike.  The hold up right now is a 3d printer big enough to manage large prints.  What I’d really like is a high resolution Terminator 2 style Formlabs printer like the one below that’ll print up to fairing sized pieces…

I’ve re-3d-scanned the stripped down ZG1000 Kawasaki Concours in order to better work out what the rear lights will look like.  You can wheel in and out and manipulate that model below with a mouse.  The scanner did a bunch of software updates which led to a much higher resolution 3d image.

I modelled it with the stock seat on with an eye to taking the pillion seat off and building a very minimal back end.  With some careful cutting I’ll be able to use the seat dimensions to figure out how best to render the rear light assembly.  I’ve been doing 2-d drawings but they don’t deal with the 3d complexities of the real thing.  I’m hoping this solves that. As far as electronic parts go, I think it’s time to get the lights sorted out.  At the moment I’m looking at some integrated LED head and tail lights to minimize stalks sticking out of the bodywork.

This week, thanks to our forward thinking student council, we received a Structure 3d scanner.  Unboxing created a lot of curiosity.  In about five minutes we had the sensor mounted on the front of our ipad mini and we were off to the races.

3d modelling is a tricky business.  It typically takes a fairly comprehensive knowledge of software to get yourself a decent 3d model.  Thanks to the Structure sensor, anyone with an ipad (grade 3 and up?) could quickly and easily create a 3d model of pretty much anything they can walk around.

It takes a bit of practice, but once you see how the laser sensor paints the object (it looks like it’s covering it with clay on the ipad display), you get the hang of it and you’re producing remarkably accurate 3d models.

The files are obj format – an open source format that a lot of software can easily read.  I’ve found that sketchfab.com is a handy way to share the models and offers a fair bit of customization in how the models present as well.

I’ve been using Obj Viewer to see the 3d models on the desktop (they’re all saved as model.obj, so very quickly you’ll find yourself buried in model.obj files not knowing which one is which).  I quickly got into the habit of renaming them as I opened them.

As an avenue into more complex 3d modelling software (like Blender, which imports obj files with no problems), the Structure scanner is a great starting point.  You can quickly create 3d models and then clean them up or embellish them in something like Blender (also an open source, astonishingly good piece of freeware).

You can view your model once you’ve painted it on the ipad screen (the pictures here are screen captures from the ipad).  If you like the model you can email the obj file.  The largest (an attempt at scanning our computer lab) was about 4 megabytes.  A smaller object, like a head, is usually under two.


Hammer Model by tking on Sketchfab

Being able to quickly and easily model 3d objects offers all sorts of interesting educational opportunities.  Because you’re accurately measuring volume, the immediate uses as a measuring tool in mathematics and the sciences are obvious.  Using this scanner you could quickly and accurately measure the growth by volume of a very complex shape like a plant.  If you’re creating clothing, you would be able to scan your prototype and then see what it looks like in a wide variety of textures from all angles.  As a prototyping and measurement tool, the Structure Scanner takes some beating.

Our focus is on creating 3d models for our software engineering project.  3d models are often too perfect, looking rather plastic.  The Structure sensor is going to allow us to model clothing and other complex textures and organic shapes much more realistically and quickly.

At less than the price of a game console, this little sensor opens up what used to be the inaccessible world of 3d modelling to everyone. I’m teaching a class on 3d modelling in Blender next semester, so what better way to practice than on my partially taken apart for maintenance ZG1000?

Naked ZG1000 by timking17 on Sketchfab

The model was made with the Occipital Structure Sensor 3d Scanner.  I’m trying different editing programs.  I used the 3d Builder integrated into Windows 10 to edit out the extra bits captured by the scanner.  It’s quite easy to use and has some pretty good editing tools.  If you’re trying 3d modelling for the first time it’s not a bad place to start (and it’s included in Windows 10!).

The file is shared on Sketchfab, which I find to be an easy way to do presentation editing and sharing of a 3d model.  We’re using Blender in class, so I’ll be cranking out some Blender motorcycle models in the next couple of weeks.  The trick is going to be to get them looking life like rather than digitally modelled.  I wonder how you model patina… 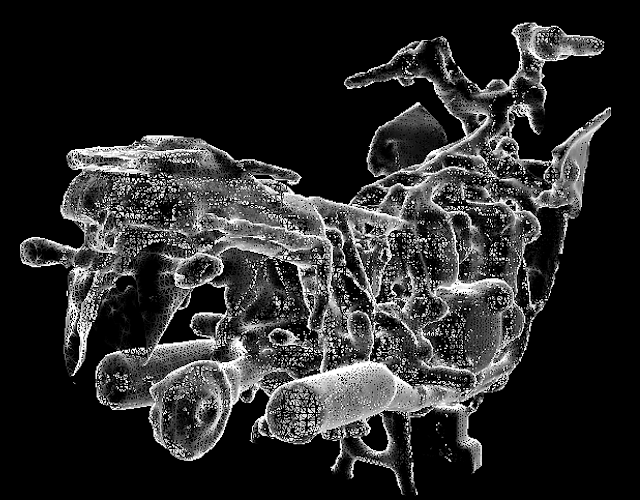 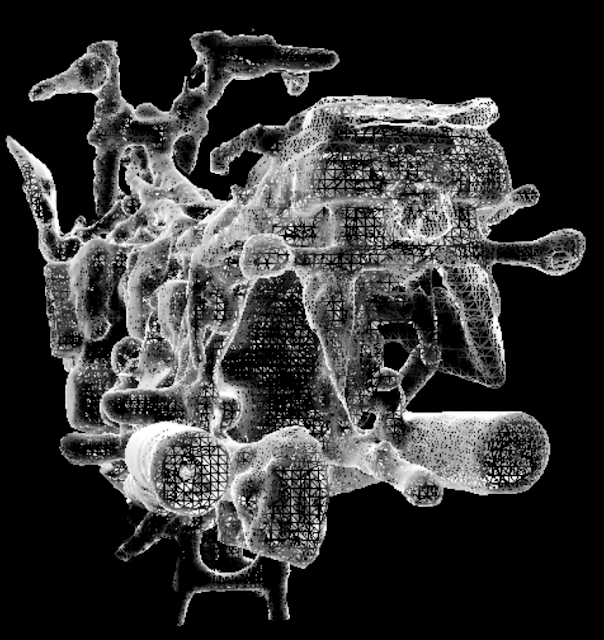 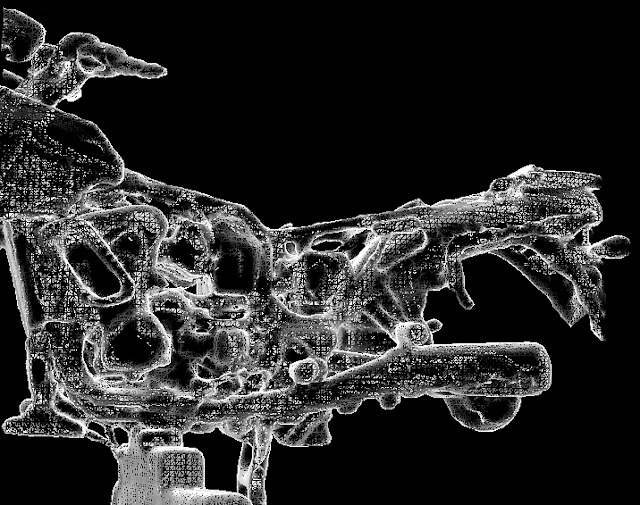 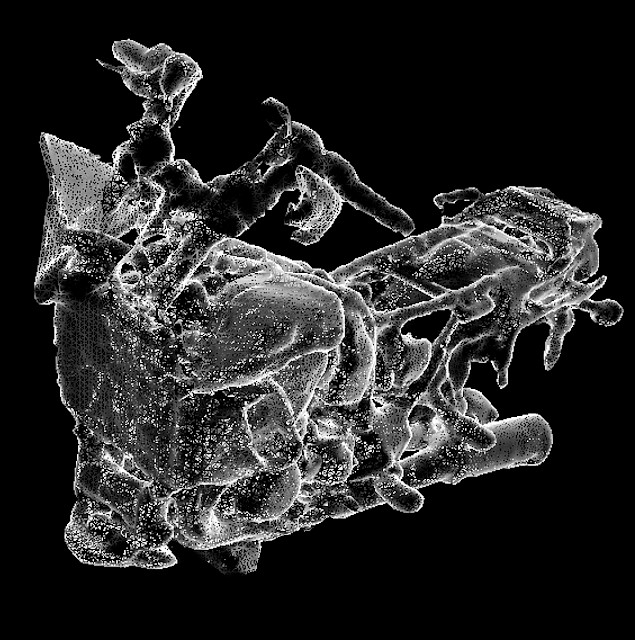