So, the rims are back from Fireball Coatings.  They look fantastic, but I’m a bit baffled by the process.  Mark, the owner, suggested getting candy coated gold, though I’d initially said I’d just go for the plain gold.  After being convinced of the upgrade the process took longer than expected (about 20 days instead of a week) because he was out of the product needed to do it.  Communication wasn’t a strong point during this wait.

I was worried about tolerances changing on the inside of the rims, but I was assured that they  would be masked off.  The end result has a fair bit of over-spray, which isn’t easy to clean up (which I guess bodes well for the rims themselves in regular wear and tear use).  With a Dremel I’ve been able to clean up the over-spray and I’ve begun to rebuild the rims for re-installation.

The final bafflement came when Mark said that black bits dropped into the process and there are minor imperfections as a result.  They are barely visible, but his explanation was that no one does gold candy coat on rims.  This begs the question, why up-sell me on them then?  All the strangeness aside, they do look fantastic, and I’m looking forward to seeing them back on the bike again.  The final cost to coat two rims was just over $300 Canadian taxes in (or about a dollar fifty US). 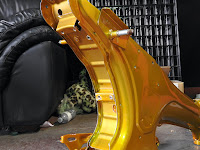 I’m not sure what I’d do differently next time as I don’t have much experience with industrial coatings.  I think I’ll give Fireball another go in the future though, just not if I’m on a tight timeline.  I imagine less finicky (ie: rims without a shaft drive hub on them) parts would be less of a headache.  They had a coated motorcycle frame on the floor at the shop that looked spectacular.  Mark figures he can coat all the basic parts of a bike (frame, swing arm, exposed bits and pieces) for about $1000.

The tire portion of the process was handled by Two Wheel Motorsport just north of Guelph on Highway 6.  It’s my first time doing motorcycle tires (everything previous was well rubbered when I got it and sold safetied as is).  What I’ve learned is that motorcycle tires are expensive!  And evidently wear out much sooner than car tires (odd considering how they are supporting much less weight on lower mileage).

The tires from the dealer were about forty bucks more per tire than online, but you’re buying them on the internet sight unseen, and they might be cheap because they’re stale.

I got the benefit of very experienced Concours owners in the parts department helping with tire choices rather than depending on the generic tire size finder online.  No one seems to support the OEM Dunlops that originally came with the bike twenty two years ago, so selecting ZG1000 tires is about preferences rather than manufacturer’s recommendations.

I was going to go with Bridgestones, but when a guy with over a million miles ridden (!) suggests the Michelins if you want good handling and amazing mileage, I didn’t ignore him.

All was well until I got the $600 bill… for two tires!  I think my last car change was 4 Yokohamas for the Mazda2, and it cost $650 and included balancing and installation.  Like I said, bike tires are expensive!  It was $35 to install each tire – ninety nine and change for the work.  I think I got charged for tire disposal even though the rims were bare, and even though I asked for a 90° valve stem on the back I didn’t get one (though I don’t think I was charged for it).

I thought maybe buying tires at the Bike Show would save money, but the prices listed weren’t as good as the sale prices offered over the desk at Two Wheel, and they didn’t have the weird sizes I need for the Concours anyway, so that isn’t a way out.

I used to be a tire guy at Canadian Tire when I’d just gotten out of high school.  I know my way around the tools involved.  In the future I think I’m going to try and get tires and bits and pieces online and then do the install myself.  I’m going to install balancing beads on my current tires.  If they work as well as advertised, balancing (the only part that requires expensive machinery) won’t be necessary.  When I do the tires on the XS1100 I’ll do them in-house and see how it goes.

Speaking of in-house, the last frustration was removing the bearings.  I took them in to school figuring that the autoshop had a press and could take them out easily.  They sat there for a week before I finally took them home and knocked out the bearings in ten minutes.  While there for the week they managed to lose my bearing retaining clips and the front bearing spacer as well, so I’m having to spend another $20 at the dealer replacing parts they lost.  The moral of this story?  Do the work yourself.  You learn more by doing it, and you’re less likely to lose parts you need to put the thing back together again.

The missing bits and pieces should be in this week, I should have the bike back on its feet by this weekend.  I’m looking forward to seeing how it looks with its new kicks on.

Dealership installation of two tires (with new valve stems, no balancing, no disposal – though they charged me for that anyway):  $99

How to change your own tires.