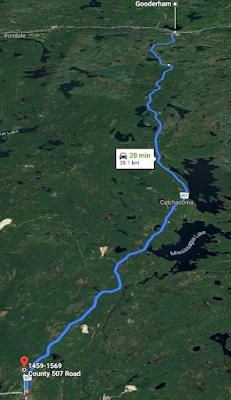 The in-law’s cottage happens to be about 20 kms away from the bottom of the 507.  I like the 507.  It twists and turns through the Canadian Shield offering you bend after bend without the usual tedium of Southern Ontario roads.  I lost myself riding down it the other day.

Last week I was pondering how fear can creep in to your riding in extreme circumstances, like trying to ride through a GTA rush hour commute.  This week I’m struggling with how the Canada Moto-Guide and Cycle Canada are portraying deaths on the 507, which is evidently a magnet for sportbike riders who have confused public roads with private race tracks.

On the motorcyclists spectrum I tend toward the sportier end of things.  I’ve owned Ninjas, sports-tourers, adventure and off-road bikes.  The only thing that chased me away from sportbikes early in my riding career were the insane insurance rates and the fact that any modern motorcycle is already light years beyond most sports cars in terms of performance.  My old Tiger goes 0-60 in under four seconds, or about as fast as many current top-end muscle and sports cars.  To spend thousands more on insurance for a bike designed for a race-track just doesn’t make a lot of sense, especially when you factor in the condition of Ontario roads.


Having said that, I’ve been a diehard MotoGP fan for the past six years.  Watching riders develop and express their genius at the pinnacle of motorcycle racing is not only glorious to watch, but it has taught me a lot about riding dynamics, and I think it has improved my bike-craft.  I totally get speed.  Riding a bike always feels like a bit of a tight-rope walk, and being able to do it quickly and smoothly is a skill-set I highly value.

Like so many things in motorcycling, balance seems to be key.  Last week, among the idiotic commuters of the GTA, a frustrating number of whom were texting in their laps and half paying attention, I was unable to manage that danger and it led to a great deal of anxiety.  Rather than give in to that fear or throw a blanket of bravado over it, I looked right at it and found a way to overcome it.  Honesty with yourself is vital if you’re actually interested in mastering your bikecraft.  I came to the conclusion that you need to approach two wheels with a touch of swagger and arrogance when that fear rises up.  This is done to moderate fear and give you back some rational control, especially when circumstances conspire against you.

The problem with swagger and arrogance… and fear for that matter, is that it’s easy to go too far, and so many people seem to.  Emotionality seems to dictate so many aspects of motorcycling culture.  From the arrogance of the ding-dongs in shorts and flip flops who tend to the extremes of the motorcycling spectrum (cruisers and sportbikes), to the ex-motorcyclists and haters who can only speak from fear, it’s these extremes who seem to speak for the sport.  I struggle with those emotionally driven extremes, but recently CMG seems intent on writing odes to them.

The CMG editorial news-letter this week makes much of not knowing why this rider died:

“He knew the dangers, and he admitted to going fast,” says his partner, Lisa Downer. “He knew when, where, how – it was just one of those things. A lot of people think the way the curve was, there was a car (approaching him) that was just a little too far over the line and David had to compensate. By the time that car went around the bend, they wouldn’t even have known that David went off, because the sightline’s gone. Or it could have been an animal, or a bit of gravel. You just don’t know.”

There were no skid marks on the road. Like so many of our lost, no one will ever know why.

Our lost?  Here’s a video by that same rider from the year before:

“…the helmet cam shows his speedometer. “A decent pace on the 507 in central Ontario, Canada,” he wrote in the description. “Typical Ontario roads, bumpy, keeping me in check.” His average speed on the near-deserted road was above 160 km/h, more than double the speed limit, and at one point it shows an indicated 199, where the digital display tops out. At such speeds on a public road, there’s little room for error.” – little room for error?

With that on the internet, one wonders how he had his license the following year.  You can come at this from ‘it might have been an animal, or a car, or gravel’, but I think I’m going to come at it from here:


“David was an experienced rider who’d got back into motorcycling just three years ago; he was 52, but had put bikes on hold since his 30s when he went out west…”

An ‘experienced rider’ who had been riding for three years, after a twenty year gap?  And his first bike in twenty years was a World Super-bike winning Honda super sport?  Whatever he was riding in the mid-eighties and early nineties certainly wasn’t anything like that RC51.  What his actual riding experience was is in question here, but rather than assign any responsibility to an inexperienced rider, we are speculating about animals, cars and gravel?


I generally disagree with the speed kills angle that law enforcement likes to push.  If that were the case all our astronauts would be dead.  So would everyone who has ever ridden the Isle of Man TT.  Speed doesn’t kill, but how you manage it is vital.  There is a time and a place.  If you’re intent on riding so beyond the realm of common sense on a public road, then I think you should take the next step and sort yourself out for track days, and then find an opportunity to race.  In Ontario you have all sorts of options from Racer5’s track day training to the Vintage Road Racing  Association, where you can ride it hard and put it away wet in a place where you’re not putting people’s children playing in their front yard in mortal peril.  If you’ve actually got some talent, you could find yourself considering CSBK.  Surely there is a moral imperative involved in how and where you choose to ride?  Surely we are ultimately responsible for our riding?


Strangely, Mark’s article, The Quick and the Dead, from 2017 has a much clearer idea of time and place when it comes to riding at these kinds of speeds.  In this most recent news-letter we’re at “it would be easy to dismiss David Rusk as just another speed freak, killed by his own excess“.  In 2017 he was quite reasonably stating: “If you’re going to speed, don’t ride faster than you can see and dress properly. And if you’re going to speed, do it on a track“.  I guess the new blameless recklessness sells better?


There is a romantic fatalism implicit in how both CMG and Cycle Canada have framed these deaths that willfully ignores much of what caused this misery in the first place.  Motorcycling is a dangerous activity.  Doing it recklessly is neither brave, nor noble.  Trying to dress it up in sainthood, or imaging blame when the cause if repeatedly slapping you in the face is neither productive nor beneficial to our sport.  Up both ends of the motorcycling spectrum are riders who are all about the swagger.  For those dick swingers this kind of it’s-never-your-fault writing is like going to church.  I get it.  Writing for your audience is the key to enlarging it. 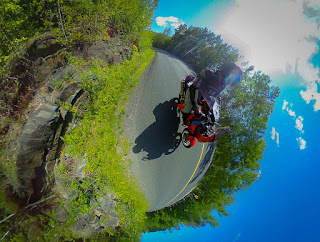 Last Sunday I did a few hundred kilometres picking up bodies of water for the Water is Life GT rally, with the 507 being the final run south to the cottage.  The roads weren’t exceptionally busy and I was able to fall into a rhythm on the 507 that reminded me of what a great road it is.  As it unfolds in front of you, you can’t guess where it’s going to go next.  Surrounded by the trees, rocks and lakes of the Shield, it’s a gloriously Canadian landscape.


I’m not dawdling when I ride.  I prefer to not have traffic creeping up on me, I’m usually the one doing the passing (easy on a bike).  The big Tiger fits me and the long suspension can handle the rough pavement, but I’m never over riding the limits of the bike where gravel on the road, an animal or other drivers dictate how my ride is going to end.  The agility and size of a bike offer me opportunities that driving a car doesn’t, but it doesn’t mean I open the taps just because I can.  Balance is key.


There are times when a rider (or any road user) can be in the wrong place at the wrong time and no amount of skill will save you.  For the riders (and anyone) who perishes like that, I have nothing but sympathy.  They are the ones we should be reserving sainthood for.  Not doing the things that you love, like being out in the wind on a bike, because of that possibility will neuter your quality of life.  That doesn’t mean you have a free pass to be reckless though.  Do dangerous things as well as you’re able. 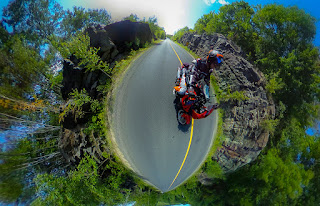 I’m well aware of the dangers of riding, but I’m not going to throw a blanket of arrogance over them, and I’m certainly not going to describe recklessness as a virtue while hiding in delusions of blame.  Doing a dangerous thing well has been a repeated theme on TMD, as has media’s portrayal of riding.  Having our own media trying to dress up poor decision making as victimization isn’t flattering to motorcycling.  If you can’t be honest about your responsibilities when riding perhaps it’s time to hang up your boots.  If you don’t, reality might do it for you.