I just found out I get to spend a glorious weekend at the end of May in Victoria BC.  I’ve been out that way before, and after the worst winter in years in Ontario I’ve already started thinking about how I’m going to spend a day in something other than a frigid deep-freeze.

Cycle BC rentals and tours offers bikes out of Victoria for a variety of uses.  I immediately began fantasizing about a glorious day tour through southern Vancouver Island on two wheels.  With choices of a Suzuki V-Strom 650, Kawasaki KLR-650 (which I’m already on the verge of buying) and other smaller bikes, the Vancouver Island bike choices are ideal!

The KLR would be nice, but the V-Strom is a whole other bike by a whole other manufacturer, and I’ve always been Suzuki smitten.  The GSX-R 750 has been on my wish list since I was a teen.  The Hayabusa has a special kind of charm (especially after sitting on it).  The chance to ride a Suzi through the Pacific Northwest would be a dream come true. 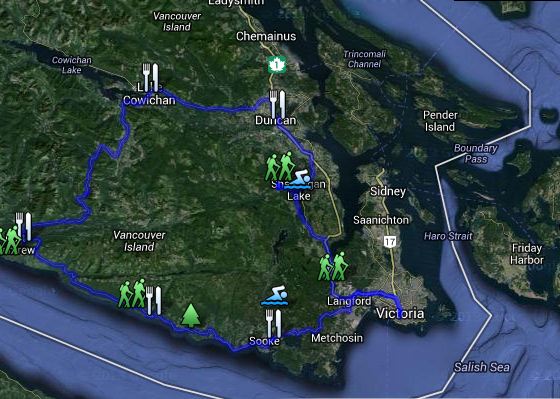 After having a look over the options, I think the Port Renfrew-Cowichan Motorcycle Route is what I’m looking for.  272 kilometres of wild, North Western Pacific seaside, a winding route through the mountains and then back down the other side into Victoria again.

After such a long, cold winter, the thought of riding around Southern Vancouver Island in late spring is a glimmer of hope in the darkness.