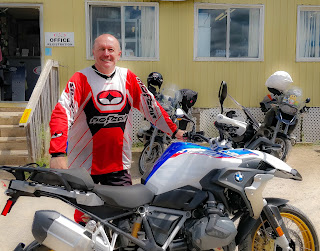 We were at SMART Adventures Off-road Training last week.  You should go, same price as a day out watching professional sports-ball, but you’re the athlete and what you learn there will raise your bikecraft to another level.  While there I got an opportunity to go out for a ride on the new BMW 1250GS with the legendary Clinton Smout.  The new GS is a thing of beauty and a very capable machine, but what struck me most about it was how high the handlebars are set; the bike is very easy to ride while standing on the pegs, which is one of the ‘command’ positions when riding a dual sport or adventure bike.  I’m a tall guy (6’3″) and often have to bend too much to operate a bike from the pegs, but not on that GS. 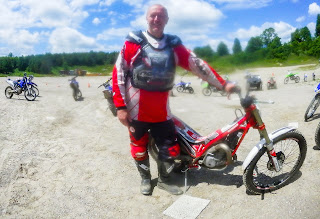 We switched to the big bikes after a couple of hours riding trials bikes, which don’t have seats at all.  Standing up for that long on these super light weight, powerful and very twitchy machines pretty much wiped me out, so a chance to ride BMW’s latest evolution of the legendary GS was a nice change.  It was a blisteringly hot day well into the mid-thirties Celsius and I was drenched after the trials gymnastics, so I did what I usually do and stand up on the pegs once we got moving to air out a bit and get a feel for how the bike moves.

When we stopped for a coffee Clinton said something that surprised me.  A friend of his was charged with “stunt riding” for standing on his pegs while riding.  He wasn’t doing anything silly or speeding, he just stood up on the pegs on a bike designed to help you control it that way.  This charge is an officer’s discretion situation and the OPP officer who pulled him over who may very well have no understanding of motorcycling or this kind of dual purpose machine made the decision that this was stunting.  He fought it in court, but the judge told him if he wanted to stretch he should just pull over to the side of the highway and stretch, which is the kind of advice that’ll get you killed.  Along with that bad advice he got whacked with a crippling stunt driving charge.  I can’t imagine what this does on your driving record for insurance, let alone the fines and possible jail time.  This is the same charge as doing over 150 kms/hr on a public road!


I’ve frequently stood up on the pegs while riding in order to maintain a level of comfort by cooling off or stretching that would allow me to ride with better focus.  I’ve only done this on adventure bikes designed for it and there is no intention of stunting in this.  At other times I’ve done it to navigate particularly gnarly pavement and construction or provide greater situational awareness by better seeing what’s ahead.  The types of bikes I ride are designed to use this variation in rider position to actually enhance control of the vehicle.

There was a recent local news article that talked about all the stunt driving going on in the area.  One of the infractions listed in from the Ontario Traffic Act where it looks at the definition of stunt driving is driving while not in the driver’s seat.  The intent there is obviously aimed at a car, but Ontario likes to cast a wide net so it can charge citizens and tax them with fines without question, so the vagueness is left in there intentionally and it cost Clinton’s buddy big.  This once again reminds me of just how aggressively Ontario pillories motorcyclists.


I’m very conscious of how physically challenging motorcycle riding is and consider it a priority to retain maximum focus and control of these potentially dangerous vehicles.  In Ontario, where riders can’t split traffic and filter, and where temperatures in the summer can easily hit danger levels, the unprotected motorcyclist under the baking sun is forced to sit in stationary traffic and fumes and isn’t even allowed to stand up to get some air when things move?  It’s like Ontario wants to kill people who ride.


I’ve gone on rides at various times where road conditions are such that standing on the pegs actually helps me navigate circumstances and manage road hazards more safely.  Standing on the pegs can, as CycleWorld describes it, turn “you into a dynamic part of your bike” and “an active part of the suspension.”  Thanks to Ontario’s vague laws and officious police force and judiciary I can get had up for stunt riding when I stand up to correctly navigate terrible road surfaces (of which Ontario has many), road construction (of which Ontario has many) or if I simply need a better look at what is happening ahead.  Situation awareness is just another one of the many benefits of standing on your pegs, but Ontario is more interested in charging citizens with harsh, non-specific generalizations that can financially cripple them.


The general advice online is if you need to stand just lift your butt a bit so you can make the argument that you aren’t standing – you are and you’re breaking the law, but at least you’re putting your life at risk doing it wrong so it looks legal.  This doesn’t offer you optimal control, but safe operation of a motorcycle isn’t what we’re going after anymore, is it?  The other way out is to have a nice, amiable chat with the officer and ensure them that what you’re doing is pertinent to the nature of the multi-disciplinary machine you’re on.  You might not be able to make that argument with sports bikes or cruisers, but if your bike has any off road pretensions, standing on the pegs is something it was designed for that actually helps a rider manage difficult terrain.


Next time I’m on an atrocious Ontario road getting my teeth knocked out by a loose and dangerous surface I imagine I’ll do the safe thing and stand up to better manage it, but I better keep an eye out for the law while I do it.  Wouldn’t it be something is safe vehicle operation was what drove our laws instead of vagaries that allow officious cops to make criminals of otherwise law abiding citizens?


https://www.orangeville.com/news-story/10125681–blatant-disregard-out-of-towners-dominate-list-of-drivers-charged-by-dufferin-opp-on-hwy-10-airport-road-near-orangeville/
“Under the Highway Traffic Act, those convicted of stunt driving or street racing could face a fine ranging from $2,000 to $10,000, a prison term of six months and a driving suspension.”


https://www.revzilla.com/common-tread/off-road-riding-tips-when-to-sit-stand-or-paddle
“Standing while riding does more than make you look cool and allow you to stretch your legs – it will keep you balanced and in control of your motorcycle.”  Marisa McInturff, Motorcycle Safety Foundation


https://www.cycleworld.com/2015/09/18/cycle-world-tips-and-tricks-stand-up-on-your-motorcycle/
“your feet are crucial points of contact with and control of the bike. Standing up on the pegs turns you into a dynamic part of your bike rather than just dead weight. It makes you an active part of the suspension.”


https://advrider.com/f/threads/standing-on-pegs-illegal.1232572/
Ontario isn’t the only jurisdiction where the law is out of whack with vehicle dynamics and common sense.


https://onewheeldrive.net/2012/05/03/standing-illegal-bc-new-motorcycle-safety-laws-and-flaws/
More insanity, this time from BC, where the majority of roads aren’t paved by you can’t stand up and provide better control and safety while riding!  “a majority of BC’s roads are unpaved and by the letter this law does endanger, if not make outlaws of, responsible dual sport, & adventure riders.”


https://www.gearpatrol.com/cars/motorcycles/a501251/skills-for-adventure-riding/
“You want to be standing up straight, but with a slight bend in your knees and elbows, in order to keep good control over the bike’s movement.”