I got replacement rubber bits for the now fifteen year old Triumph Tiger 955i in before Christmas, but the weather has been so diabolically cold that even with a propane heater in the garage, the floor is still radiating negative thirty degrees and working in there is a misery.  We finally had a break in temperature this weekend so I got a chance to fit new rubber on the Tiger… 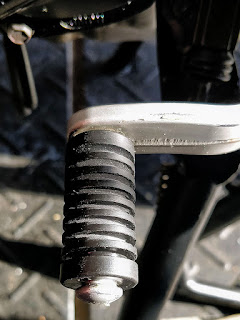 My targeted bits were the rubber covers on the mirror stalks, which aren’t that important but you see a lot of them while you’re riding and they bothered me.  The shift leaver rubber has been held together with Gorilla Tape for the better part of a year (that’s some tough tape) and one of the rubber bits that go between the seat and the frame had disappeared, so I was aiming to replace that too so the seat would sit evenly and there would be no metal on metal rubbing.


The shift leaver was a simple thing.  I cut off the tape and the old rubber which was half torn.  With the new rubber warmed up and some WD40, the new bit slid on fairly easily.

The mirror arm rubbers were equally straight forward.  The mirror is on a threaded end.  Undoing that and the nut under it that holds it tight meant I could slide the mirror rubbers off.  The old ones were cracked in multiple places and barely hanging on.  I cleaned up the threads and metal under which was a bit rusty, put some rust paint on there to make sure none comes back and slid the new rubber covers on.  Another quick fix. 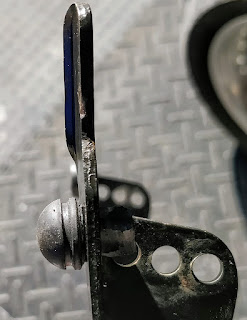 The problems arose when I tried to fit the seat rubbers.  I suspect the dealer sent me the wrong bits.  The rubbers that sit between the adjustable seat height bracket under the seat and the frame are circular with a flexible back that holds them to the frame.  What I got were some pieces of rubber with sticky backing that aren’t even the same thickness as the circular rubber grommets. 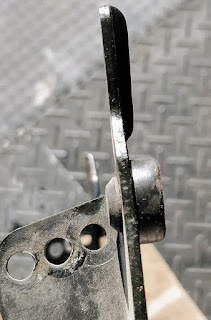 I’d shrug it off but at $3.30 plus tax and shipping for each of these sticky rubber bits, I’m out fifteen odd bucks in parts that seem to have nothing to do with what I was trying to fix.  I did send photos of the parts required and I thought we were clear on what was needed.  Rather than flush more money on parts I didn’t ask for, I found a rubber grommet that was a bit too big and cut it down to fit the hole.  It’s a snug fit and compresses to about the same thickness as the other grommets.  I might eventually get four matching rubber grommets just to make things even down there, but for now the seat isn’t uneven and the frame isn’t metal rubbing on metal.


The winter maintenance on the Triumph has been pretty straightforward this year.  Last year I did the fork oil, spark plugs, air filter and coolant and upgraded the dodgy plastic fuel line connectors, so this year the only maintenance was my usual end of season oil change.  I run the bike on the Triumph suggested Mobil1 10w40 motorcycle specific oil and I change it once at the end of the season.


The perished rubbers thing was as much an aesthetic choice as it was a performance fix.  Little details like rubber pieces on an older bike bring it back into focus.  Regularly watching Car SOS buying full sets of rubbers for older cars they are restoring probably intensified the urge. 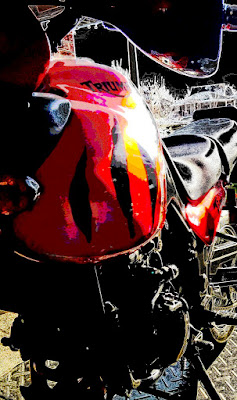 Since I purchased the Tiger almost two years ago I’ve done all the fluids and changed the tires which produced a much more road capable bike (the old ones were well past due).  I’ve also replaced the chain, but other than these rubber bits and the fuel fittings last winter I haven’t replaced anything that wasn’t a regular service item.  The old Tiger has been a trustworthy steed.


I’m usually able to steal a ride toward the end of winter as the sunlight returns and we get the odd warm day with dry roads.  With any luck I’m only a few weeks away from stealing another one.  The Tiger’s ready for it.