The idea of online echo-chambers where you only ever see ideas that imitate your own bias has been a recent topic of concern.  Since battling my way through a philosophy degree at the University of Guelph, I’ve made it a point of trying on difficult ideas even if my first reflex is to disagree with them.  I was once again testing myself like this at ICTC’s Future of Work Summit this week.


One of the main themes that kept popping up in this summit was people from private for-profit sectors suggesting that we completely rejig the public education system to serve up graduates who integrate with their employment needs more effectively. Ontario’s new government has a similarly reductive view of public education’s role.  I teach technology and have always encouraged my students to discover and cultivate pathways that will lead them to a meaningful and financially effective careers, it’s one of my go-tos, but this subsuming of public education into the needs of private business pushed me further down that path than I care to tread. I usually tweet my responses to ideas that come up in conferences in order to document them.  It helps me remember what happened when I’m reflecting on them later.  My initial response to a number of for-profit businesses asking that the entire public education system get rejigged for their benefit was to try and point out the difference between what public education does and what they think it does.  Contrary to popular belief, our sole function isn’t to crank out employees whose only function is to make profit.

There was a strange tension, for me at least, between the aboriginal opening prayer song and talk of inclusion with the profit driven interest that kept bubbling up in various presentations.  Perry McLeod-Shabogesic‘s thoughts on the wisdom of honouring everyone’s contribution and his careful wording around being a helper regardless of profit or personal benefit felt sharply at odds with the keynote by Cheryl Cran, whose lean, aggressive management strategies produce small but exceedingly efficient profit driven teams.  Part of me likes that vicious efficiency.  Drop the dead weight and maximize your effectiveness.  I continue to participate in competition because of that drive, but I can’t let it motivate my teaching as a whole because my function is to serve the whole.  I couldn’t help but think, “all business speaks from a place of privilege but has no idea that it does.”  The idea of profit only exists as an option when fundamental needs are met.  For many of the people in the world (and it’s the majority) who are still battling with fundamental needs, profit is a privilege they can’t afford.

In a public classroom I teach students who will never earn profit for someone else in their lives.  Some will choose to work in the public sector helping society as a whole in healthcare, education or support services.  Others will want to push back against the profit driven economy that is putting the fate of humanity in jeopardy.  Others still may want to focus on meaningful work that is ignored by the private sector, like raising children or volunteerism, and some of them simply aren’t capable of working in the exclusivity of a for-profit workplace.  I think Perry would think laterally and find ways to value all of those contributions.  That indigenous philosophy based around the health of the community over the wealth of an individual is very helpful for a teacher considering their clientele.  In the privileged world of business, all those people in my classroom don’t exist.  Business focused speakers would want to ensure you never hired any of that sizable chunk of the population in the first place.

If a sizable portion of Canada’s population doesn’t work in for-profit business, rejigging public education to serve that single sector demonstrates a fundamental misunderstanding of how society works.  From a social justice point of view, you could argue that public education should focus on producing engaged and socially aware citizens.  From an aboriginal point of view, we should be speaking to people from a place of community.  From a special needs point of view, we should be working toward greater compassion and understanding of everyone’s contribution.  An environmental point of view might also be a driver in public education.  Environmentalism is increasingly diametrically opposed to globalized business and an ever-expanding economy in a world that is fraying under the weight of this unsustainable philosophy.  Public education needs to address all of these perspectives of human society.


During the 2008 market collapse, one of those periodic moments in history when profit driven people lose their minds and fictionalize the world we all live in to such a degree that it becomes obviously unsustainable and collapses in on itself, I saw an online comment that said, “you don’t feed profit driven business steak, you let it feed off society’s waste, like the cockroach that it is.”  That’s a harsh thing to say but people were pretty mad in 2008, though most seem to have forgotten all about it now, though we’re still paying for it.


The idea of inclusivity was a recurring theme at the summit.  One example given was was how remote communities don’t have digital connectivity yet and this was held up as an example of a lack of equity.  It is indeed a lack of equity, but you can bet that no profit driven business is going to provide that infrastructure.  The infrastructure we build in society, especially the stuff to address remote communities where profit isn’t going to motivate action, is always done with public money.  Roads are built not by the corporations that ruin them with transport trucks, but by governments supported by taxpayers.  ICT infrastructure is no different.  Corporations make their profits on the backs of infrastructure built with public funds.  In this way, there is no real private company – they all rest on the back of publicly funded infrastructure.  This is neither good nor bad, it’s just the way it is.  Business is too fragile to make profit without support – fragility is the underbelly of that business privilege.  That many business people wave their profit focus around with pride is always baffling to me.  There isn’t a single billionaire who hasn’t made their wealth on the back of publicly funded infrastructure.  To make that fragility the primary focus of public education is absurd.


This isn’t to say that private, profit-driven business does not have a function in our society, but it isn’t the heart and it certainly shouldn’t be the brain.  At best, profit driven business is an appendage, like the arms or legs.  Important, no doubt, but it can as often injure the body politic as it does help.  Healthy, supported private business is important, but it isn’t the beall and endall of human society, and tailoring public education to cater to it is, at best, myopic and self serving.


Over this past weekend in Toronto I’ve had a strange breadth of experience.  On the Saturday night we went to the Tiff Lightbox to see Apollo 11, incredibly restored and rendered footage of the Apollo 11 Moon mission…

I was born two months before that happened and spent my early years in love with the US space program.  I was in tears watching this film.  I consider it a pinnacle of human achievement that points to a possible, sustainable future.  My love of technology was fostered by NASA’s work around Apollo.  I fear we’ve lost anything like the vision and drive needed to get back to this summit.  Watching the film, I couldn’t help but remind myself that this wasn’t a public or private enterprise, but a brilliant combination of what we are capable of when we combine our various talents and work together. 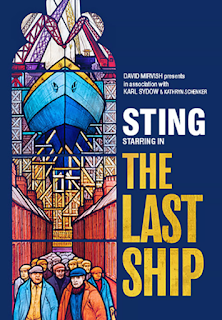 The next afternoon I was at Sting’s The Last Ship, a heart wrenching and de-humanizing tale of conservative globalization in 1970s England.  I have family from Tyneside where this takes place and it rocked me.  As a pro-union story valuing humanity over the economic forces that diminish us, it amazed me that it was playing in the capital of Fordnation.  That the theatre was full of one percenters who daily throw people on the heap for their own profit was a disconnect, but that’s Toronto for you.  As we stepped over homeless people laying on the sidewalks on our way back to the hotel, I wondered how Torontonians can keep it all straight.  Perhaps seeing Sting is all that matters and the story doesn’t, but it should.


The next day I was sitting in this summit on the future of work where well dressed business experts talked about how we should rejig the public education system to better serve their profit margin.  The Last Ship part of me was struggling with a rising anger, but there is more to this than just dismissing the needs of business.  The purpose of public education isn’t to serve business elitism, but there are a number of situations where what we do in public education aligns with business need.  A literate, numerate and digitally fluent population helps everyone regardless of the sector of society they go on to participate in.  The digital divide we contribute to by graduating students with little or no digital fluency is hurting much more than business’s bottom line.  From that point of view, business and the rest of society are in alignment.


If you’re digitally illiterate in the Twenty-First Century, you’re in real trouble whether you’re working in the public sector, the private sector or at an NGO.  It even hurts you if you’re not working at all.  Canada as a whole would benefit from a more digitally fluent society.  ICTC may have aimed this summit at the needs of private enterprise, but addressing that new literacy goes well beyond the needs of business.

ICTC’s drive for a digital skills continuum jibes with my expanded view of public education as much more than human resources training for business.  Our country and our planet would benefit from more digitally effective citizens.  How to make changes to Canada’s complex ecosystem of educational organizations was also a concern at the summit.  Canada is the only leading OECD country without a federal ministry of education or a centralized idea of education, yet Canada performs astonishingly well in the world.  Could it be that our mozaic of often competing education systems has protecting it from gross simplification by other social interests?  A central system would be much easier to manipulate.


At the end of three days in Toronto, I’m stretched between being excited about the ideas of agility and efficiency advocated in the Future of Work Summit and worried about the dehumanizing effects that globalization and business efficiency tend to bring with them.  In a more perfect world I’d hope we could chase efficiency for something other than profit.


Canada’s non-profit and charity sectors:
https://www.canadiancharitylaw.ca/blog/key_statistics_on_canadas_charity_and_non_profit_sector
“The Canadian registered charity sector alone (not even including non-profits that are not charities) is bigger than the following industries (as a percentage of GDP):


http://policyoptions.irpp.org/magazines/march-2019/populism-rises-look-fallen-wages/
Downward pressure on wages – we have more and more people and less need for them…