If you’re in the mood for a motorbike adventure to the top of the world, give yourself fifty minutes and give this a watch…


Evidently the company that runs this trip is no longer doing business, but here’s hoping they are able to get it going again, what a journey.

This is a compilation of amazing video.  Other than the first track I generally enjoyed the musical accompaniment too.


What surprised me was the level of acrobatic control that is possible on a bike, and the drifting is astonishing.  Between the stunt bike riding and the race footage, it makes me wonder how someone learns this degree of control.  A bike with no plastic fairings that got dropped a lot must be somewhere in their past.  I’ve often thought that an old dirt bike that I could drop without worrying about it would help me get a feel for the limits on a bike, even at low speeds. 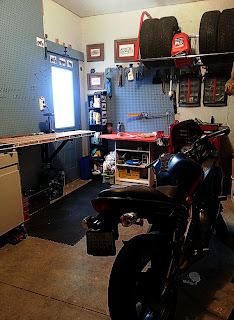 On a now-for-something-completely-different in terms of motorbike media, I’m finishing up the bike hole.  For decoration I wanted something bikey.  My wife got me some fantastic hand drawn prints while we were in England this summer, so they were destined for the finished garage.

I also wanted some clean pictures of modern bikes that I like.  We just set up a photo printing station at work, so I found some clean, high-def side views of bikes on white backgrounds that made for some nice 4x6s.

The end result is a nicely bike themed bike hole.  It’s not quite finished yet, but it’s looking good.