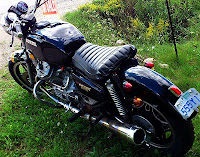 Last summer I was driving past the bike on the right over and over again.  Had I the means to ride it home, I suspect I would have snapped it up (they were only asking six hundred bucks and everything on it worked).

The idea of picking up an old bike, getting it going and then hitting the open road with it on a long trip has a lot of romantic appeal.

I’ve been trying to work out how to do a coast to coast Trans Canada trip when I live in the middle of the country.  Riding one way and then flying to the other coast seems a bit heavy handed.  To resolve the issue I’ve decided to plan it empty handed.  I’ll fly out to the East Coast, find a used bike for sale somewhere on the Island, get it sorted out and then head west.

One of the nice things about shopping the classifieds (besides not paying the rolling off the lot premium) is that you might pick up a bike that you otherwise wouldn’t.

Browsing the classifieds in St. John’s NFLD today I came across this Honda VTX.  I’ve never even heard of this bike, but that is one cool looking ride.  I’m the furthest thing from a cruiser fan, but you have to wonder what kind of relationship you’d have with that Honda as you ride coast to coast.

It’d certainly hold its value well, I might even break even on the other side, and it would have long legs for that epic journey.

The Maxim on the right costs less than it would cost to ship a bike across Canada. It has just had new mufflers, tires and battery.  With some minor fix ups I’d probably be well on my way for less than two grand.  It might not have the style and presence of the VTX, but it would bring its own history with it and offer its own unique experience.

The nice thing about doing it this way is the trip itself is dictated by what’s out there, and the bike might be something you wouldn’t otherwise develop a riding relationship with.  From thousand dollar cheapies to expensive chromed out blingers, on a quiet Tuesday morning in July there was an interesting mix of bikes available in the St. John’s area, and each one would make your cross country ride a completely different experience.

When it’s a one trip bike, you might ignore some of the must haves you usually think about when buying a long term bike.  Those must haves often lead to a lot of compromises.  Here is a bike you’ll ride for a few weeks one summer.  Without the weight of a long term relationship, what would you want to try out that you wouldn’t otherwise?

I imagine I could fly out with my plates and find the bike, call back for insurance and be ready to go in only a couple of days.  At the other end I could put it up for sale on consignment and have it settled out while I’m flying home. The only complication might be if you fell in love, then an extension on the trip might be in order.

From St. John’s NFLD on the Atlantic coast to Tofino BC on the Pacific Coast

Leave at Sunrise over the Atlantic, ride to sunset in the Pacific…

The only planned stop would be a home for a rest stop in Ontario on my way across.  7813kms across if I stay the course, but I’d be hard pressed to pass through places I’ve never been before without having a look around.  Conservatively I’d guess that this would be a 10,000km trip.

At a couple of tanks of gas a day, covering 5-600kms would be easy and allow for some wandering time as well.  I’d throw a goal that far up the road and see how it went.  It’d be two weeks at 500kms/day, but with other stops and breaks, three weeks wouldn’t be a bad guess.

Three ferry rides (off  The Rock, across a Great Lake and over to Vancouver Island), the Atlantic Ocean, the East Coast, across Quebec and Ontario, through the Prairies, over the Rocky Mountains and onto Vancouver Island for a final push to the Pacific Ocean.  Coast to coast across Canada by motorbike! 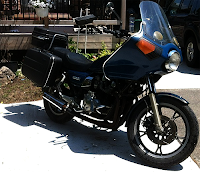 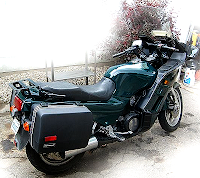 I guess I like the more angular style of ’80s bikes… 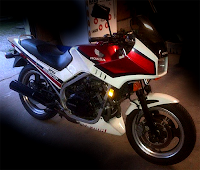 Agony!  ‘84 Honda Interceptor: Had this been available in March when I was looking for my first bike, Tim’s Motorcycle Diaries would have started off way differently!  I’ve had a crush on these bikes since I was a kid, and only $1500!