The other week I posted a discussion on the Concours Owners Group asking how to pass a large group of bikers on the road.  That discussion sparked an angry rebuttal condemning me for mocking the happy pirate look that a large portion of the (especially) North American motorcycle community identifies with.  Personally, I’d say people can dress however they want and ride whatever they want, but I get the sense that the pirate types don’t feel that way.  On COG I was trying to be funny, but with an edge.  On the Georgian Bay circumnavigation I ran into some corporately attired Harley riders who wanted to point out how much unlike them I looked.  It felt like hazing with the intent of getting me to look like a proper biker.  Nothing will get my back up faster than someone telling me I have conform to their standard, especially when it’s a stupid standard.  The irony wasn’t lost on me that these rebels without a clue whose look is predicated on nonconformity were uncomfortable with a motorcyclist not in proper uniform.
One of the reasons I make a point of reading British biking magazines is because they are free of (and willing to make fun of) this dominant North American biking culture.  They don’t worship Harley Davidson as the one and only motor company, and they try to look at the breadth of motorbiking rather than forcing a single version of it down everyone’s throats.  Had I the boat load of money that they cost I would happily buy an HD V-Rod (not considered a ‘real’ Harley by purists because it’s liquid cooled).  It’s a fine machine and I’d get one for that reason, but I don’t think I’d ever buy a motorcycle because of the manufacturer alone, I’m not that politically driven. 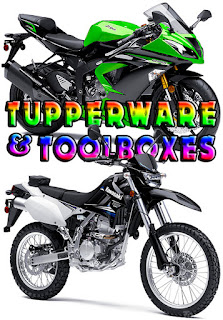 When I first started riding I was shiny and new about it and told one of my colleagues who rode that I was just starting out.  He asked me what I got and when I told him a Ninja he put his nose in the air and said, “hmm, isn’t that like riding tupperware?”  Just recently I told him I was thinking about getting a dual sport.  He said, “why would you want that?  It’d be like riding a toolbox!”  In the biker ethos there is only one kind of bike with a single aesthetic. If you don’t conform expect criticism.
In talking to other motorcyclists I’ve noticed a consensus that the cruiser crowd tends to be holier-than-thou, not returning a wave or giving you the gears at a stop for not conforming to the dress code.  Motorcyclists tend to be iconoclasts.  They have to be or they’d be doing what everyone else does – riding around in the biggest cage they could afford.  Yet the act of riding isn’t enough for some.  There are also social expectations that these rebellious non-conformists expect all riders to conform to.
At the end of the day I’m a fan of two wheeling.  I’d call myself a motorcyclist.  I get as excited about looking at historical Harleys as I do at racing tupperware or riding toolboxes.  I only wish more bikers would be less critical of anything other than their singular view of the sport.  I refuse to conform to their nonconformity.