I attended edcamp Hamilton this past weekend.  It was my first cross country trip on my newly minted motorbike license as well as a chance to meet and self direct my professional development with colleagues from beyond my own board.  I got there heavily oxygenated and cold; the Starbucks on tap helped warm me up and then we were into sessions that the edcampers themselves suggested.

With over 140 people interested in education showing up on a Saturday morning just to talk shop, it was a busy, energizing affair.  The first session I attended started off a bit stiff, but quickly loosened up as the bar was raised on the pedagogical reflection.  Peter Skillen pitched some critical thinking on technology use in learning, and it wasn’t all the gee-wiz thinking from a few years ago.  We are such chameleons in our ability to change ourselves to fit our technology.  Peter asked some hard questions about how we’re making students connect to technology.  Educational technology seems to have reached a stage of maturity where we can ask hard questions about it.  Jane Mitchinson also brought up the idea of multi-tasking (or more accurately, rapid task switching) in terms of the information overflow students face when using digital tools.  Getting information from the internet is like drinking from a fire hose  you’ll get a face full, and it won’t be graceful or particularly useful.  Learning how to use these tools is something we’re still not very good at.  As an opening discussion it got everyone moving and for the newer edcampers it got them realizing how a single person isn’t running any of the sessions; this is a truly an open, democratic process.  It can’t be directed.

I got restless in the seconds session because it seemed to belabor a point that wasn’t going anywhere.  After listening to a bit of talk around how to keep your idealism in the current educational environment, I started getting quite negative, so I went for a wander to think about what was said and do one of the best things you can do at an edcamp – wander by rooms and stumble across awesome conversations.

In that session I left, Carlo Fusco said, “the education system was designed to sort people into jobs in order to fit them in to the new industrial model.  Education is there to sort people.”  I suspect he was being Socratic and pushing an idea so that others could question it, but my cynicism knows no bounds after the past year teaching in Ontario.  Others took a stab at it before I commented that I find it impossible to remain an idealist in the current Ontario educational climate.  With unions, governments and corporations playing games with education for their own benefit, I said I find it hard to believe in anyone’s best intentions.

The wandering broke up my negativity as I stumbled across wonderful, critical discussions about  gamification, online learning tools and what a twenty first century student needs to know.  One of the nicest things about an edcamp is that you want to be there (or you wouldn’t be).  No one is holding you to one mode of learning or thinking.

Earlier edcamps I attended had very few people in upper administrative roles attending, it was a real grass roots movement of teachers, student teachers and onsite admin, the people who work with students directly every day.  It was nice to see more senior administrative types at edcamp Hamilton, though their predilection for telling people how they should be thinking might get in the way of what edcamps are really about.  If  asking big questions settles my value theory and allows me to do my job better, then I’ll do it at an edcamp because that is where I get to direct my own professional development.  Suggesting limitations on what people should be allowed to talk about in order to promote an administrative objective strikes me a missing the point.  This has me thinking about educational leadership in a twenty first century context.  If we’re moving toward more self directed, less hierarchical ways of directing PD, how does an education leader move people in the direction they want them to?  We talk about student centered learning as an ideal to move towards.  Edcamps do that for PD, but not if we’re going to start drawing lines around what people can and can’t talk about.

I ended the day with some very interrogative discussions with people I have fundamental disagreements with about recent events in the Ontario PLN community.  This too was great PD because it allowed me to understand their point of  view and be less reactionary to it.

The last session of the edcamp still had larger groups meeting, but many smaller groups spun off and talked about what they needed to.  Ah, the freedom to not be told what to think; if only other PD had more of that.

I’ll call #EdCampHam another excellent EdCamp experience.  Thanks to the EdcampHam organizers for a wonderfully immersive day of thinking about my profession.

I attended Edcamp Hamilton this past weekend.  On a Saturday morning what did almost one hundred teachers and administrators do on the eve of a strike?  They spent their own time and money to travel to Ancaster to direct their own professional development.

Discussions ranged from technology integration to how to most effectively assess student learning (along with dozens of other topics).  What is magical about the edcamp experience is that teachers direct their own research and reflection.  There is no top down directive or education consultant being paid to sell an idea.  No one is paid to be there, no one is expected to be there, yet the room was full at 8:30 on a Saturday morning.

I’ve long thought that self-direction is the key element in professional development.  I’d actually argue that PD isn’t PD unless it is self directed.  When you’re sat in a room being indoctrinated by a talking head it isn’t professional or development, it would be better described as mediocre training.  Lecturing a group of people implies that they lack knowledge and need to be informed.  It implies that they aren’t professionals but unskilled employees who need direction.

I’ve got PD coming up this week.  PD often involves a paid consultant earnestly exhorting you to differentiate your teaching practice, but they do it in a completely undifferentiated, university style lecture.  If student centred differentiation is what you’re selling, selling it in a lecture is either incredibly lazy or ignorant.  In any case it suggests a lack of integrity.


The professional is, at their core, self directed.  You don’t become an expert in something without being able to self assess and improve your own practice.  Integrity should drive this self directed improvement by demanding competence.  That competence naturally creates a sense of responsibility that a professional is more than happy to be accountable for.  Self direction and the integrity that drives it creates a professionally responsible environment that accepts stringent accountability.

The teachers who go out of their way to attend (or speak!) at conferences, who expand their professional qualifications, who attend edcamps, or work in their subject councils, or participate in online communities, these teachers have made quantifiable efforts to improve their profession.  The teacher who rolls his eyes at another board run PD which he is only attending because he is being paid to be there is simply not professional in the same sense.  They are the ones who ‘professional development’ is aimed at.

Instead of only looking at years in the classroom it would be nice if we accepted that some teachers take on a more professional approach to teaching.  It would be easy enough to quantify that approach.  How many subject areas have they become qualified in?  Do they demonstrate continuous improvement?  How many self directed PD opportunities do they take?  Do they take on positions of extra responsibility? What do they do to support their subject area?  The profession of teaching in general?  Until we accept that not all teachers are created equal, we ignore both integrity and responsibility and are unable to accurately apply accountability to our profession.

Is teaching a job that requires management to take attendance and force simplistic PD down people’s throats?  Evidently, in which case it isn’t really a professional activity.  Is teaching a profession that demands self directed development through stringent accountability?  If it was it would be driven by teachers’ professionalism rather than by attendance rolls and tell-me-don’t-show-me lectures.

At the core of professional practice is the self directed development of your expertise.  I’ve got a PD day (the only one this semester) next Friday.  It will be interesting to see how this board run day will compare to the dynamic and responsive urgency of the edcamp I just attended.  I imagine I’ll see differences in the first few moments when teachers I never see doing self-directed PD are whining about why they have to be there (because they’re being paid to do it).  Then they will take attendance and the differences will only get more obvious. 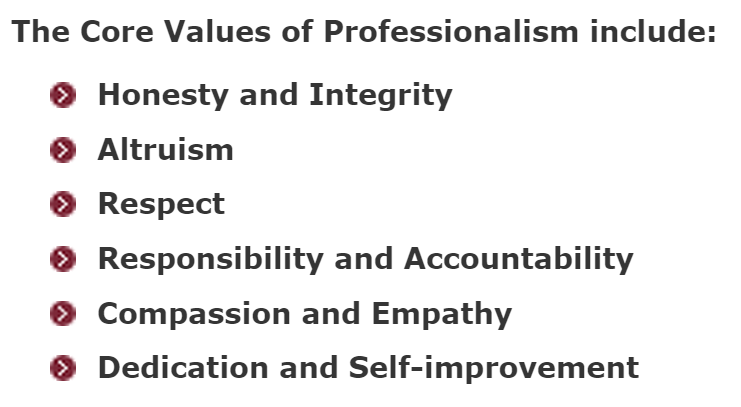