I know hyperbole sells papers, especially in the infamously hyperbolic British press, but with Dakar winners whining about how hard it is, the whole thing looks to be on the verge of imploding.  With all of this negative noise around it, it’s only a matter of time before some enterprising probably American lawyer attempts to shut the whole race down with a liability lawsuit.  I”m hoping the cavalier French organization running the Dakar are suitably prepared to deal with that.  It would be a crying shame to see the Dakar ended by such mediocrity.

These headlines popped up on Lyndon Posskitt’s Instragram feed.  In typical Lyndon fashion he was simply thankful for the attention, you’d be hard pressed to find a nicer guy.  That the headlines are so turned up to eleven as to be practically hysterical isn’t anything new.  When unprepared playboy racer Mark Thatcher got lost in the Sahara during the 1982 Paris to Dakar rally the British press lost their minds.  Rather than wonder why a spoiled rich kid who had forgotten about the race until the week before it began and then managed to navigate his driver almost two hundred kilometres off piste before crashing was in the mess he was in, they questioned this weird, dangerous foreign event.  Even the level headed BBC can’t help but describe it as a mental illness. 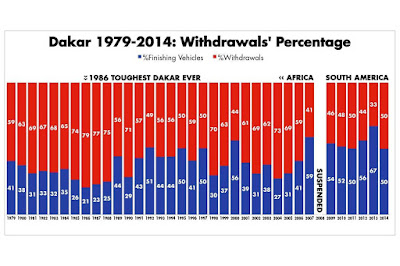 
In the almost thirty years the Dakar ran in Africa, only five times did half or more of the competitors cross the finish line.  It took until the 1990s to get over half of the starters to the finish for the first time.

Tacking on to the end of Red Bull’s graph there, in 2015 there was a 51% finishing rate.  2016 was a 62% finishing rate and 2017 came in at an all time high 72%.  Perhaps the issue is that the race has been catering to the results orientated professional rally teams more and more.  With their money and vested interests trying to control the race and maximize participation and therefore advertising revenue, there is moneyed pressure to turn the Dakar into a glorified two week world rally stage.  The quick professionals are the biggest complainers.  If you’re looking for proof, those inflationary finishing percentages tell a tale.  Or perhaps it’s because in 2018 everybody thinks they deserve a medal for showing up. 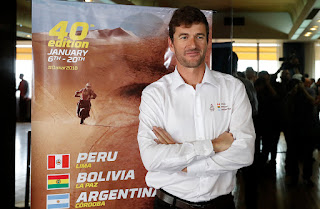 If anything this year’s Dakar looked like the desert races of old with sand, dunes and savage navigation.  What you’re seeing here is Dakar sporting director Marc Coma‘s course design getting better and better.  If anyone could take the Dakar back to its roots, it’s the guy who was worried about navigation losing its importance in the first place.

You can take all the press hyperbole fed by professional speed-racer whining with a grain of salt.  The Dakar is in good hands and it will remain what it is: the toughest motorsport event in the world.