I’m at the end of a month long drive across North America and back.  It’s time to have a go at the RV/motorhome crowd after being stuck behind these monkeys for hours on end.  The woman who got out of her truck/trailer combo near Creemore on the weekend, blocking half the pumps and causing a line just shrugged and said, “they’ll have to wait.”  It’s that kind of thinking that seems to typify the RV owner’s outlook.  The Germans renting them to drive across Vancouver Island to Tofino on the very twisty and rough Highway 4 also seemed particularly adept at getting in front of you and then stopping, but then they’re driving large, awkward, unfamiliar vehicles in a foreign country on difficult roads. 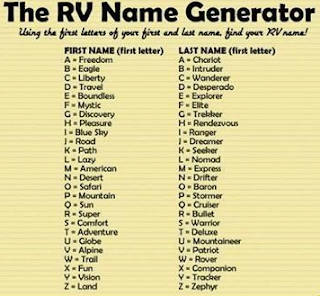 Since you end up spending a lot of time looking at the back of RVs while driving across the continent, a recurring annoyance are the names manufacturers give to the damned things.  Popular ideas revolve around freedom, power and exploration, all things that RVs don’t do.  What they actually do is create a huge amount of drag and cost to your trip while giving the impression of independence, as long as you like living like a refugee (Tom’s right, you don’t), and taking your housework with you.

We spent a few days at Pacific Playgrounds near Campbell River on Vancouver Island and I was astonished at the size and cost of the trailers and RVs on display.  In addition to the (I’m told) tens to hundreds of thousands of dollars dropped on a trailer or RV, they were pressed together inches apart in this trailer park.  The sound of poorly raised children screaming would begin at sunrise every day and continue throughout.  What little space you had was considered public and you could expect dozens of people to walk through it daily without batting an eyelash.  That people would spend upwards of fifty grand for a trailer or more than my first two houses for motorhome and then enjoy single digit mpg figures while having no space is living the dream, but it isn’t mine.

A big motorhome holds about 150 gallons of gas – at the three bucks US a gallon it was on this trip, that’s a $450+US ($585CAD) fill up each time, and that’s with cheap US gas.  In Canada you can expect to drop about eight hundred bucks (!!!) on each fill up.  If you’re enjoying 8mpg, as seems typical for these things, then you’re getting just over a thousand miles to a tank.  If you’re moving like we were on this trip, averaging over 500 miles a day, then you’re looking at $200+US a day in gas – we paid just over $100 a day for our hotel stays (all of which included breakfast) and we didn’t have to do the dishes, or drive like turds blocking the roads.  You might make a bit back by not eating in restaurants all the time, but unless you really enjoy housekeeping why would you take it on holiday with you?

In case you can’t tell, I am not a fan of the RV/motorhome lifestyle.  You can find comfortable, long distance capable vehicles that get above 30mpg, cost a fraction as much and will commute you to work capably instead of sitting in your driveway costing you time, money and space even when not in use.  You’ll also get to sleep in real beds and skip the dishes with the money you aren’t pouring into an RV in gas costs (I’ll leave the transmission rebuilds, toilet maintenance and the fact that campsites cost you half what a motel room does nowadays out of the equation).  To top it all off you won’t have to live like a refugee in a trailer park.

Listen to Tom, he knows…

Ignoring the hundreds of thousands of dollars I’d have had to pour into a motorhome or trailer and truck to pull it, the cost of us doing this same trip using a recreational (and I use the term lightly) vehicle would have been stratospheric.  Ferry fees for a motorhome/RV onto and off Vancouver Island are six times what we paid, costing you well north of six hundred bucks for each crossing.


Averaging mid-thirties miles per gallon in our little SUV, we spent well under a thousand bucks in gas carrying three adult sized people and their luggage comfortably.  An 8mpg (typical) RV would have cost us more than seven grand just in gasoline!!!  We paid about five grand in hotels over the month on the road, some of that included a house rental.  Our hotel and gas costs were less than gas alone in an RV.  Had the three ferry trips been with the take-all-your-shit-with-you RV variety we would have been looking at a two grand ferry bill instead of the less than three hundred we paid.


I would have enjoyed a bit more space, and I’ve often wondered how big a vehicle I’d need to bring a motorbike along on a big family road trip, but with Honda Ridgelines and other efficient crew cab trucks getting high twenties in gas mileage, and modern, large utility vans getting up there too, there are agile, non-road blocking options that let me still get close to 30mpg while bringing a bike along, and I don’t have to live like a refugee while using them. 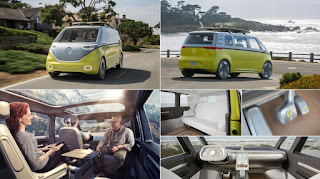 The idea of a reasonably sized vehicle to move people ends for me in the realm of a  minivan.  The thought of a hyper efficient human mover appeals though.  VW is looking a few years down the road at re-producing a futuristic version of its mini-bus.  That’s as far down the RV lifestyle path as I dare to tread.  What VW is doing looks a bit sci-fi and improbable, but an efficient hybrid people mover that could carry a bike?  I’m in.