The 360° on motorcycle photographic experiment continues.  At this point I think I’ve got it down to a science.  What was once an awkward hand held process has evolved into a consistently effective, hands-free automatic process that I could easily set up on just about any bike and get shots with no action needed from the rider.


Initially I just popped the 360 camera into my pocket and went for a ride.  When I saw a nice scene I took it out and pressed the shutter.  The downside was that my arm was in every shot.  Another issue was that I didn’t look like I was into the ride because the camera was a distraction, which it was.  All this busy work meant not being able to get photos of the best bits, like bending the bike into a corner.

My first attempts at attaching the camera to the bike highlighted a number of issues.  Out of the various 360 cameras I’d tried, only the Ricoh Theta offered a timed shot option, taking a photo automatically every 8-60 seconds depending on how you set it.  The Samsung Gear 360 and the 360Fly both only offered stop motion video at much lower resolutions and quality.  The Theta is also light weight and low profile, so it works well in the wind, unlike heavier, blockier designs from other manufacturers.


I initially tried suction pad mounts, but I never trusted them in the rough and tumble and windy on-bike environment.  I eventually migrated to a flexible tripod, but my first choice started falling apart right after I got it.  When it let go while we were riding down the road and killed the camera I was ready to give up on that kind of mount, but I went up market and got a Lammcou model that has been durable, strong and perfect for the job.


Now that I’ve worked my way through testing all the kit, it’s so well sorted out that I think I could set it all up on any bike and start the photos going.  When the rider returned I could download all the captured images and see what we got.  Ideally I’d have a camera that takes a photo automatically every couple of seconds, but such a thing doesn’t seem to exist.  At the eight second delay on the Theta I don’t get every shot I want, but after a ride I get an awful lot of choice and there are always some gems in there.


I’d really like to try this process on something a bit more extreme, like track day riding or off road riding.  As long as the rider keeps the bike rubber side down, I think this resilient setup produces unique shots impossible to get otherwise.  When people see these shots they ask if I was using a drone or was from another bike dangerously close, but the process is much safer and cheaper than either of those things.  I’m surprised that no motorcycle magazine wants to give this a go.  The shots it produces are exciting, original and show riding from a very intimate point of view.  The ThetaV takes very high resolution photos that would work well online and even in print. 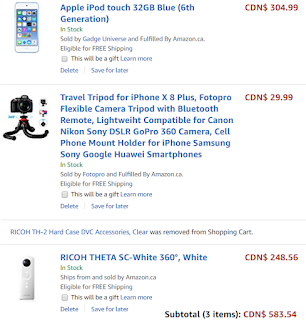 Putting together a kit that will do this is fairly straightforward.  The list on the left is all the parts you need to be taking 360° photos easily and well on your bike.  If you already have a smartphone you can skip over half of the costs listed for the ipod.  The camera and tripod are only about $300 Canadian ($225USD).  Getting the photos off the camera is easy enough and the Ricoh Theta software is by far the most stable and easiest to use out of all the manufacturers that I’ve tried.  Ricoh also offers a pile of accessories including a weather resistant hard case that has easily fended off rain while on the motorcycle.  There is also a new fully waterproof case if you wanted to get some action shots of your next river crossing.

The process for shooting 360 on-bike photographs is straightforward:

Like anything else digital, experiment with it for best results.  I’ve attached the camera to my windshield extender, rear view mirrors and tail luggage rack, but if you’re adventurous (and have that protective case), why not try wrapping it around your frame in various locations.  Since it’s set and forget, you can just go for a nice ride and then see what you caught when you get back.