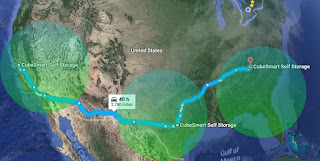 I came up with the idea of setting up motorcycles down south in rental storage units to access over the winter a while back.  This is just the sort of thing I’d do if I had that kind of disposable money laying around.


To set up San Francisco bike storage I’d need to get an Ontario bike down there and parked up in the storage facility.  The idea is to have a ready to go bike that I can fly to with minimal luggage.  I’d eventually be able to fly in to San Francisco with only a carry on bag, take a cab to the storage unit and be on two wheels in one of the best motorcycling locations in the world within a few hours of flying out of the snowbelt.  For the setup I’d take known, works-for-me gear for the ride and then hang it up in the storage unit along with the bike.  Flights back at the moment are one stop, seven hours and about $700 Canadian.


The weather is already closing in here.  We’ve had dustings of snow multiple times.  This would be one of my last chances to make the ride out west before the white wall of winter descends on us.  In trying to make good time to SanFran, I’d also aim to get a motorcycling bucket list item done:  an Iron Butt thousand miles in twenty-four hours:

Day 2:  Portage IL to Denver, CO.  Be on the road by 5am for the big push west.  Cross Chicago before rush hour picks up and then thump across the plains.  1027 miles in 24 hours.  Get in to Denver overnight and then 2 days at the Embassy Suites by Hilton Denver Stapleton.


Day 4:  Denver to Grand Junction.  Into the Rockies, 333 miles to the Hampton Inn Grand Junction.  A lower mileage day means this should be as much about enjoying the mountains as it is about making time.

Day 5:  Grand Junction to Ely.  429 mountain miles to Ely and the Ramada by Wyndam Ely passing through 3 national parks, so it should be a pretty ride.

Day 6:  Ely NV to San Francisco.  554 mile day to wrap up the trip.  Get into San Francisco late, park up the bike and put everything into hibernation mode.  Load up a carry-on bag with the essentials and take a cab to the airport.  Retrace the four thousand plus miles back in five hours. 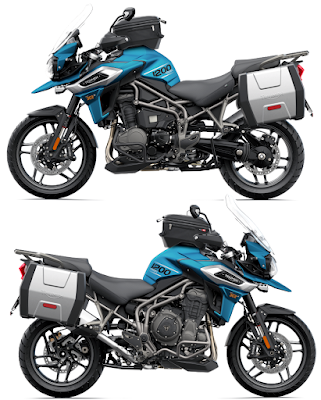 I should be able to take the bike out, park it up and be back home within a week, then I’ll have a bike on-call on the West Coast.


For this trip I need something that can cover big miles effectively but is still a useful tool on twisty roads.  The big Triumph Tiger 1200XRx is a long distance capable bike that fits a big guy like me.  It’s also easy to maintain (shaft drive, fuel injection) and comes with many long distance handy abilities like long suspension to soak up bad roads and luggage for the long trip.


A big Tiger in this format costs just over $24k Canadian.  It’s a pretty thing, I saw the new ones in the flesh at the Triumph Tiger ATLAK meet up last summer.  Many magazines describe the bike as very large, but I didn’t find it overwhelmingly so.  In fact, I was surprised at how svelte it was for a 1200cc adventure bike.


But there are some things about the big Tiger that I’m not a fan of.  I’ve never gotten excited about the big aluminum panniers thing on adventure bikes, or any bike for that matter.  I like the colour matched lucifer orange ones on my old Tiger.  I think the aluminum ones look half assed and unfinished, and I get to pay hundreds more for the privilege of having them because others think they’re a fashion item.


The other issue is a recent BIKE Magazine review in which their Tiger developed a number of electrical issues.  Whatever is waiting for me on the West Coast would need to work when I opened that storage unit roller door.  The Tiger is also a reasonably sensible choice, but it’d be nice to have something a bit more come-hither waiting for me in San-Fran. 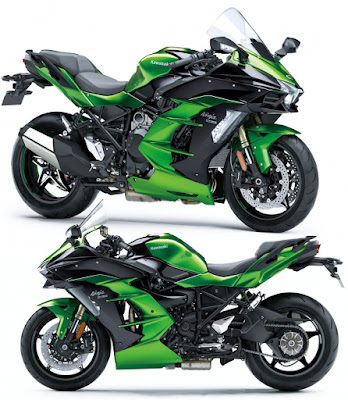 For surprisingly similar money there is something that I’d describe as more of a dream bike:  the Kawasaki H2 supercharged demon bike in sport touring form.  The H2 SX is an efficient, powerful, supercharger-chirping-as-it-breaks-the-sound-barrier thing of beauty.  It weighs about as much as the big Tiger but produces prodigiously more power and looks like a Japanese super model.


On top of that it has beautifully designed and colour matched panniers that practically disappear into the stunning looks of the bike, rather than looking like tacked on, low-rent metal boxes.


Having the SX sitting in a storage unit in San Francisco would be a constant West Coast siren call.  If I wanted to go far, it could handle it, if I wanted to canyon carve in and around San-Fran, it’d do that to.


As much as I love adventure bikes for how well they fit me, I think I’d have the Kawasaki super model waiting for me on the west coast.  It’d be a blast to ride on the trip out there and would fit in with Californian bike culture much better.