The idea of a year’s sabbatical has come up a few times recently.  I’m ten years away from my retirement date.  My job has a four out of five option where my salary is stretched over five years while I’m only paid for four.  It means a slightly smaller paycheque, but then a paid year off at the end of it.


My wife has ideas of going back to school in that year off, but I’m disinclined to take a year off teaching in school to go to school.  What I’d really like to do is the EPIC MOTORCYCLING TRIP with the intent of writing and producing art and photography out of it.  When people do this they typically line up the RTW (’round the world) ride and then spend a lot of time in poor countries making unintentionally Western-superiority statements about how hardy they are and how backwards non-Europeans are.   I’m reluctant to follow that pattern.


We recently spent a summer driving most of the way across North America and back again.  I had a number of moments when I saw North America for what it is:  a place that has almost no human history in it.  At the Canadian Museum of Human Rights I started thinking about how native aboriginal people are to North America (there were lots of displays on how poorly Europeans integrated with the first immigrants to this place).  A few days later at the Royal Tyrrell Museum in Drumheller I discovered that most of North America’s mega-fauna disappeared right after humans first arrived; we’re an environmental scurge no matter where we go.  It got me thinking about how North America must have looked before we got here and unbalanced it all.


The Americas were blissfully free of human beings for all bit a trivially small, recent moment in time.  They separated from the massive Pangea landmass between two hundred and a hundred and seventy million years ago, long before anything remotely human walked the earth.  For millenia upon millenia North and South America were unique ecosystems with animals not found anywhere else, all of it safe from the human migration out of Africa two to three million years ago.  Earliest estimates now have humans crossing the northern ice bridge during an ice age about fifteen thousand years ago.  That means that, conservatively, humans (aboriginal and later settlers) have claimed North America as theirs for less than 0.0086% of its existence.

This framed much of that trip for me.  I kept trying to see the lands we were travelling through without the recent influx of foreign species.  Humans appeared and immediately started filling this place with invasive species from where they came from.  This became especially evident when I was looking into the eyes of a truly native species in Yellowstone Park.


This human free view of the Americas is something we tend to ignore as we’re all so busy justifying the pieces of it we divide up between ourselves.  Most of North America’s history had nothing to do with us.  There are other parts of the world that have had humans living in them for hundreds of thousands of years, but those places aren’t here.

This sabbatical ride would be to circumnavigate North America and try to see the place itself without its invasive and destructive recent history. 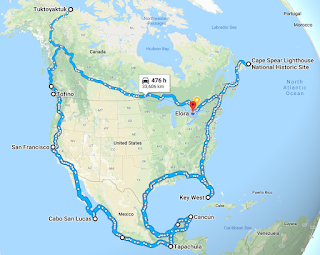 The trick would be to time this ride with the weather.  I’d be off work beginning in July and then have until the end of the following August.  Heading east to Cape Spear (North America’s easternmost point) would mean avoiding the early winters that hit Newfoundland.  Spending a summer at home would be a nice way to start the sabbatical, then, as my wife heads off to school, I hit the road.  We could arrange meetups when she’s off school through the fall.

I’d start in Newfoundland in September and then head down the East Coast to Key West before riding around the Gulf of Mexico to Cancun and then crossing the continent at its narrowest point before making my way up the West Coast.  I’d try to time my pause for the holiday break, servicing and then parking up the bike in storage for a few months in California.


I’d fly back out and release the bike from storage in the late spring and aim to be taking the long road to the Arctic Ocean as the days become infinite over the Tundra.  Ideally I’d be back home by mid-July. 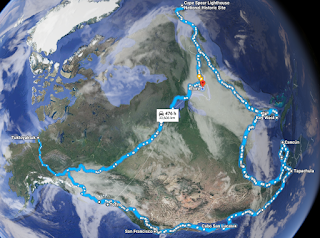 From tropical rain forests to mountains, plains and tundra, this ride would show the staggering range of geography to be found in North America.  At well over thirty-three thousand kilometres, this would also be an epic ride in terms of distance (RTW rides are typically 20-30,000kms).


The only downside would be the cost of travel in the USA and Canada, but there are ways to manage that without breaking the bank.  With the idea of getting to know the North America under the human migration, wild camping as often as possible would be a nice way to get closer to the land and to meet the people from all over Turtle Island who now call it home.

With a dearth of freeway travel on this trip, it would be about a lot of coastal roads and staying to the edge of the continent.  With potentially rough roads in the far south and north of the trip, something that is capable both on and off road would be ideal.  It wouldn’t need to be a high speed touring cable unit, but it would have to carry the gear for at least occasional wild camping.  There are a number of mid-sized adventure bikes that would fit this need, though I’d be just at tempted to take my current Tiger.  Perhaps I could customize it as a sabre-toothed Tiger in relation to the America’s apex predator (made extinct when humans showed up).


Riding tens of thousands of kilometres in a relatively short period of time means some challenging logistics, especially if I want to spend breaks with my significant other.  The ride out to Cape Spear on the easternmost coast is a thirty-two hundred kilometre all-Canadian opening to the trip.  All told, the ride out to Newfoundland and then back to the US border to head south down the Eastern Seaboard is nearly five thousand kilometres.  Breaking the trip into pieces is how I’ve blocked out the timing of it.

Canada East:  Elora to Cape Spear, Newfoundland and back to St. John, New Brunswick.  Mid-September.  About five thousand kilometres.  With potentially interesting weather (this year the east coast of Canada has been hammered by the remains of hurricanes) even this opening section might be challenging.  With ferries involved, doing an average of 400kms a day seems like an eminently doable thing that would also give me reasonable stopping time so I’m not always rushing past moments of insight.  Five thousand kilometres at four hundred a day works out to twelve days on the road.  Giving myself a fortnight to do that would mean being able to spend a bit of extra time where necessary (hopefully on Newfoundland).

The East Coast:  New Brunswick to Key West.  End of September/early October.  This four thousand kilometre jaunt down the East Coast would be happening in the fall, while dodging hurricanes.  Sticking to the coast would be occasionally tricky in a road system designed to put you onto an interstate, but I’d stubbornly cling to it.  Four thousand kilometres at four hundred a day average is ten days riding south.  I could easily compress that by doing it on freeways, but that’s not the point.  Being on back roads gives me a better chance of seeing the place for what it is instead of just seeing the travel industry.  I’d be aiming to get to Key West still fairly early in October and then start my circumnavigation of the Gulf of Mexico. 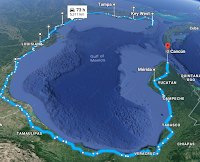 The Gulf of Mexico:  Key West, Florida to Cancun, Mexico.  From early October for the month.  The Gulf coast means I’m travelling through some culturally unique places.  New Orleans has long been a desired destination, and Texas is often described as a country in and of itself.  Crossing into Mexico puts this trip well into an adventure mind-set as I’d have to find my way through a unique culture in a language I’m not familiar with.  The fifty-three hundred kilometres of this leg of the trip should take roughly two weeks, but with borders and other hold ups it would probably be better to settle on an end of October arrival in Cancun (giving me 5-6 days of padding in there to let things run at Mexican speed). 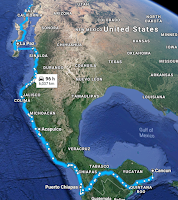 Pacific Mexico:  Cancun through Baja to San Diego, California.  This six thousand kilometre leg up the west coast of Mexico and the Baja Peninsula will eventually lead me back to the USA.  If I’m beginning this leg in early November, it should take me fifteen days at my 400/day average to make my way north.  Giving myself the month means extra days, hopefully with a reading week meetup with Alanna somewhere in Mexico for a few days off together in the warm.  Even with that relaxed schedule I should be able to make my way to San Diego, service the bike and put it into storage for a few months before making my way home for the holidays.  A handy winter break means I could collate my photos and notes from part one of the trip.

West Coast to the Arctic Ocean:  San Diego to Tuktoyaktuk.  This seven thousand kilometre ride to the northern edge of North America would take 18 days, but with multiple ferries, borders and coastal barriers I’d pad some extra time in there.  I’d be aiming for a late June/early July (midsummer, midnight sun) arrival in Tuktoyaktuk on Canada’s Arctic coast.  A month back from that would mean flying back into San Diego around the beginning of June and then riding north for many weeks.


From Vancouver Island on north this would be a rough and tumble ride with hundreds of kilometres of gravel roads.  The bike would need to be sorted and ready to take on that kind of abuse.


I’d try to be home by mid-July and enjoy some downtime before getting ready to go back into the classroom.  The first nine hundred kilometres of this trip would be long days on permafrost and gravel, but from the Dawson Highway south it would be back on tarmac and I would be able to make better time.  There is no over land passage that traces the northern coast of Canada through the tundra, so a diagonal slash south and east would be the final leg of this trip.


Wrapping my head around this continent on which I live would not only give me great material for writing, but it would also let me tick off a bucket list item:  complete a truly epic motorcycle journey before I’m too old to manage it.