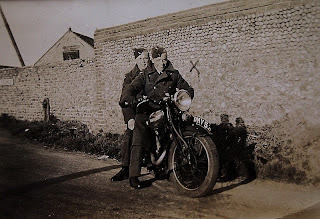 I’ve previously written about and done a fair bit of digging into my Grandad Bill Morris’s World War 2 service in the RAF.  His time spent in France with the British Expeditionary Force before the Nazis invaded in 1940 highlights a forgotten piece of history.  Weeks after Dunkirk had pulled most of the troops out, Bill’s RAF squadron was still flying a fighting retreat against overwhelming odds.

By comparing various historical documents I’ve managed to cobble together the strange course Bill’s squadron took during this desperate retreat.  Spending a year following in his footsteps would be a pretty magical experience and a brilliant way to spend a sabbatical away from work.

Conveniently, from a sabbatical time-off scheduling point of view, Bill landed in France in September, 1939 in Octeville and proceeded north to set up an air base in Norrent-Fontes near the Belgian border.  They then wintered in Rouvres and as battle commenced were fighting out of Reims before retreating south and then west around Paris, quickly setting up  aerodromes for his squadron’s Hurricanes and then breaking them down and moving on while under constant fire.  They were supposed to get out on the Lancastria in Saint-Nazaire (another forgotten piece of World War 2 history), but Bill was late getting there (operating heavy equipment means you’re not at the front of the line).  He saw the ship get dive bombed and sunk – the biggest maritime disaster in British history, with most of his squadron on it.  He spent the next two weeks working his way up the coast before getting out on a small fishing vessel and back to the UK at the end of June, just in time to get seconded to another unit for the Battle of Britain.  Being able to trace Bill’s steps would be a powerful journey.


Bill was an RAF military policeman who worked in base security, but his handiest skill was his ability to drive anything from a motorbike to a fuel bowser.  It’d be cool to use the period technology Bill used to retrace his steps through France. 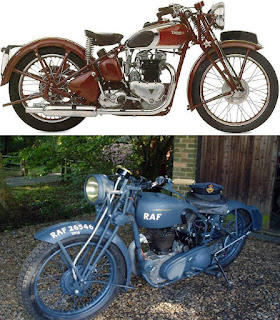 This sabbatical ride would have to happen between July of one year and the August of the next.  Following Bill’s time in France I would be landing in Octeville from the UK in September, hopefully on a period bike.  My preferred ride would be a 1939 Triumph Speed Twin, though an RAF standard Norton 16H would be equally cool.


If I couldn’t find a period bike I’d try and source a modern descendent of the Triumph or Norton.  Triumph is actually coming out with a new Speed Twin shortly, so that’s an option.  Meanwhile, Norton is coming out with the Atlas, which would be a modern take on the do everything 16H.


I’d arrange to stay in the places Bill did at the same times he did over the winter and spring.  With many days at various locations in rural France, I’d have a chance to find the old aerodromes and make drone aerial imagery of each location, hopefully finding evidence of the his war history hidden in the landscape.  I wonder if I’d be able to see evidence of the Lancastria’s resting place from the air.  With time to get a feel for the place, I’d write and record the experience as I moved slowly at first and then with greater urgency in the spring around Paris, through Ruaudin, Nantes and Saint-Nazaire before ending the trip in Brest at the end of June when Bill left, almost three weeks after Dunkirk.

Living in France for most of a year would offer a cornucopia of travel writing opportunities and the historical narrative I’m following would let me experience a lot of local colour in order to research a fictional novel I’ve been thinking about writing based on Bill’s World War 2 experience.


To get ready for this I’d get Bill’s full service record and research the whens and wheres of his experience on the continent during the Phoney War and through the Fall of France.


When all was said and done I’d pack up the bike and ship it back home to Canada where it would always be a reminder of the year I walked in my Grandad’s footsteps. 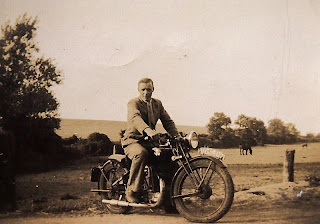