Skip to content
The hardest financial part about a long trip is being out of work.  It’s not just costing you for the trip, it’s probably costing you even more for not being at work, but I got lucky in that department.  From the beginning of July until the end of August I’m off, and with the semester winding down all I can think about is how I’d best use that time.  With the paycheque covered, could I get to Ushuaia in the time I have off?

600km days in North America seem reasonable, and I wouldn’t want to lollygag around where I live anyway.  The point of this trip would be to go far in a relatively short time.  Moving through The States quickly also means not coughing up for first world accommodation any more than I have to.  600km days would wrap up the North American bit in five days.

Mexico is where it starts to get interesting, and it’s also fairly straightforward, though it gets dodgier the further south you go.  Travelling the length of Mexico means just over two thousand kilometres of riding.  At a reduced 400kms/day (more in the north, less in the south), I’d be at the border to Guatemala in another five days.   The urge to photograph would increase exponentially as I got into cultures and geographies I’ve never experienced before, so more time wouldn’t be wasted.

Central America is, by many accounts, the slowest part of riding down the Americas.  From the southern border of Mexico to the Colon ferry terminal in Panama is only 2300kms, but in that time you cross six international borders that aren’t exactly state of the art.  At a further reduced average of 200kms per day, it would be a twelve day ride crossing those borders, mountains and rain forests to Panama.  Thanks to the one certain way of getting around the Gap closing down, those twelve days through Central America needn’t be rushed.

Crossing the Darien Gap looked like it was solved with a brilliant ferry service to Cartagena, Columbia, but the service appears to have stopped.  There are other options, but run much less regularly and are more expensive.  The best seems to be the Stahlratte, which will take motorbike and rider to and from Panama to Cartagena in quite nice circumstances for about the price of your typical Canadian airline ticket.  The scheduled trips for 2016 pose problems though. 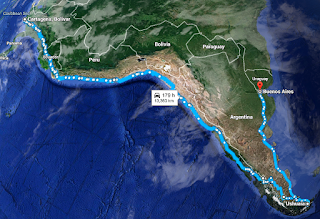 The Pan-American Highway portion of the ride is 10.300kms, and involves four international border crossings (five if you count the second Chilean crossing in Tierra del Fuego).  At 500km average days I’d be looking at 21 days of travel to get down the spine of South America to the end of the world.

It’s another three thousand kilometers back up Argentina to Bueno Aires in order to drop off the bikes for shipping back to Canada.  That’d be another six days at 600kms/day back to the big city and the flight home.

The Darien Gap poses problems because it throws the schedule off.  With the ferry not running it’s either a chartered boat (expensive, timing not great) or air freight (expensive but timely).  The schedule below is using the Stahlratte’s 2016 schedule:

… but even with those slack days before the trip over the Darien Gap, it still just fits into a summer off.  Air freight over the gap is also an option that could shift those six days in waiting in Panama to the push down South America.

Shipping back from Buenos Aires looks possible but unclear.  The most likely connection would be overseas from B.A. to NYC, probably getting the bikes back towards the end of October.  A weekend flight to NYC, picking up the bikes and riding home would be the final bit of this epic journey.


To make it even more plausible I’d tap a couple of buddies who happen to have bikes totally capable of making this trip.

Jeff’s Super Ténéré and Graeme’s V-Strom would both be more than ready to join the Tiger on a trip south, and both riders have the kind of skills and experience that would allow them to carry me so that I barely had to do anything!  Jeff has been riding bikes since biblical times and Graeme has years of riding experience plus a long stint in the military, so he can read maps and everything!  I could wander around taking photos of butterflies and videoing bikes winding through the Atacama while these two made sure we were moving in the right direction.  Having a couple of capable, experienced riders on this burn south would help keep it on schedule.


I’d take Austin’s advice in Mondo Sahara and change all the wearable bits (tires, chains, fluids, etc) prior to leaving, but otherwise the bikes would be as they are.  A Triumph, Yamaha & Suzuki tumbling down the Americas over a brief summer.  If we’re not getting manufacturer support (unless all three band together in an alliance against the unholy absolutism of celebrity BMW adventure motorcycling!), maybe we can chase down some support gear.

We could do a lot worse than an assisted walk through the Twisted Throttle adventure catalogue.  They’d do popular Japanese bikes like the V-Strom and Super10, but they also offer a lot of kit for my older Triumph.

The last weeks of school get pretty manic.  Daydreaming of massive rides that last all summer is a survival mechanism.

A summer tumbling down the Americas (timeline)