Back in August of 2014 I wanted to take a more active role in my motorcycle maintenance.  At that point I’d been riding for just over a year on my first bike, a very dependable 2007 Kawasaki Ninja 650r.  I learned a lot on that bike, but it was a turn-key experience, the bike needed very little in the way of maintenance.

The Ninja went from flat black to metallic blue and orange.  It was the last bike I rode that people commented on (I’d often get a thumbs up or have someone stop and chat in a parking lot about how nice the bike looked, which was satisfying as I’d been instrumental in restoring it from angry-young-man flat black).  The Ninja was, without a doubt, a good introduction to motorcycling, and was the king of the roost for my first two seasons.

I wanted my next bike to be one that ran because of my mechanical skills rather than one that didn’t need them.  I found a 1994 Kawasaki Concours sitting in some long grass about twenty minutes away.  I quickly discovered that sense of satisfaction I was looking for.  The Concours was an eager patient who rewarded a winter of mechanical work with a rock solid five thousand miles of riding the next summer.

The Concours has offered some memorable rides, especially looping Georgian Bay and riding on the Indianapolis Motor Speedway.  For a bike that looked like it was being permanently parked with only 25k on it, suddenly it was back in the game, going places other bikes only dream of.

That busy season of long rides took its toll on the Concours though.  It isn’t a spring chicken and after having spent the better part of two years parked before I got to it many of the soft parts on the bike were getting brittle.  I parked the Concours early and began winter maintenance knowing that the bearings and brakes both needed attention only to miss out on a late season warm spell at the end of November and into December.  I took that one on the nose figuring that’s what happens when you ride an old bike as your daily rider.

That summer we were touring on the Concours I picked up a KLX250 to experience off road riding, but doubling insurance costs for a bike that I only managed to get out on a handful of times didn’t feel very efficient.  That I struggled to keep up with traffic on it didn’t support the way I like to ride.  Motorcycles are open and unprotected, but they are also agile and powerful enough to get out of a tight squeeze – except when they aren’t.  The Concours was always there and the preferred ride, owning the road when I was on it.  When I went out with my co-rider he also loved the big red Connie, not so much the rock hard, under-powered KLX (he only ever rode on it once for less than five minutes). 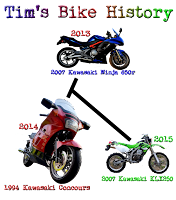 Over the winter I put some money into the Concours, doing up the rims and getting new tires.  With the rims off I also did the bearings and brakes.  As everything came back together again, suddenly the carburetors weren’t cooperating.  They’re since being rebuilt and the bike should be back together again this weekend, but instead of always being there, suddenly the Concours wasn’t.  As winter receded I could hear other bikes growling down the road, but I was grounded (again), even though I was paying insurance on two machines and longing to get back out on the road after an always too long Canadian winter.

The KLX was the first to go.  I’d never really bonded with it and, even though I always figured I’d run this blog with my most recent bike in the graphic at the top, the KLX never made it there; it never felt like the main focus of my motorcycling.  In the same week my son’s never-ridden PW-80 got sold, and suddenly I had some money aside.

As days of potential riding keep ticking by and the carburetor work drags on, the Concours started to feel like an expensive anchor rather than the wings of freedom.  I had a long talk with my wife about it.  She asked why I don’t unload it and get something dependable.  Keep the old XS1100 for that sense of mechanical satisfaction, but have a bike that’s ready to ride.  I think sentiment was paralyzing me.  Hearing a rational point of view with some perspective really helped.

With cash in an envelope I began looking around.  Before Easter we weathered an ice storm, but only two days later it was suddenly in the teens Celsius and bikes could be heard thundering down the road.  Meanwhile I was waiting for yet more parts for the Concours.  Online I was looking at sensible all purpose bikes that would fit a big guy.  Vstroms and Versys (Versi?) came and went, but they felt like a generic (they are quite common) compromise, I wasn’t excited about buying one.

Since I started riding I’ve been on Triumph Canada’s email list even though I’ve never come close to owning one (out of my league price-wise, no one else I know had one, no local dealer… pick your reason).  As a misguided teenager I purchased an utterly useless Triumph Spitfire, and in spite of that misery I’ve always had a soft spot for the brand (your adolescent brain makes your teenage experiences sparkle with emotion even when you’re older, that’s why we all still listen to the music from our teens).

While trawling around on Kijiji looking at hordes of generic, look-a-like adventure bikes I came across an actual Tiger.  It was (as are all Triumphs I’ve mooned over) too expensive for me, but that Lucifer Orange (!) paint haunted me.

Another rare warm afternoon wafted by with the sounds of motorcycles on the road so I thought, what the hell, and emailed the owner.  He’d been sitting on the bike for the better part of two months with no calls.  He was going down to the Triumph dealer on Thursday to trade it in on a new Street Triple and knew he was going to get caned by them on the trade in price.  He emailed me back and said if I had three quarters of what he’d been asking, he’d rather sell it to me than give the dealer the satisfaction.  Suddenly this fantastic looking machine was plausible.

A trip up to Ontario’s West Coast and I got to meet a nice young man who was a recent UK immigrant and a nuclear operator at the Bruce Plant.  The bike was as advertised (well looked after, second owner, some minor cosmetic imperfections), and suddenly I owned a freaking 2003 Triumph Tiger 955i!

Most used bikes offer up some surprises when you first get them, and they usually aren’t nice surprises.  The Ninja arrived with wonky handlebars the previous owner told me nothing about.  The XS1100 arrived with no valid ownership, something the previous owner failed to mention during the sale.  So far the Tiger has had nice surprises.  It arrived with a Triumph branded tank bag specific to the bike.  Oh, by the way, the previous owner said, the first owner put a Powercommander on it, and then he handed me the USB cable and software for it.  It had also been safetied in October, less than two hundred kilometres ago (paperwork included), so while I didn’t buy it safetied, it shouldn’t be difficult to do.  The bike has fifty thousand kilometres on it, but I then discovered that the first owner did two extended trips to Calgary and back (10k+ kms each time) – so even though it’s got some miles on it, many of them are from long trips that produce minimal engine wear.  After giving it a clean the bike has no wonky bits under the seats or anywhere else.  I cannot wait to get riding it. 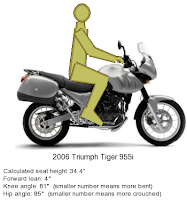 So, here I am at the beginning of a new era with my first European bike.  I’ve finally picked up a Triumph from the other side of the family tree (the bike and automobile manufacturing components of Triumph split in 1936), and I’ve got a bike I’m emotionally engaged with.  It might even be love!  Like the BMW I rented in Victoria, the controls seem to fit my hands and feet without feeling cramped and the riding position is wonderfully neutral.  When I’m in the saddle my feet are flat on the ground – just. Best of all, I don’t look like a circus bear on a tricycle on it.


With the Concours officially decommissioned and awaiting (what are hopefully) the last parts it needs before being road worthy again, it’s time to update the blog header:

What’s next?  The Concours will be sold with only a modicum of sentiment, the Tiger will be safetied and on the road (it cost $90 a year more than the Concours to insure), and I’ll enjoy having an operational, trustworthy machine made in the same place I was with lots of life left in it.  The fact that it was getting me thumbs up and one guy stopping to say what a nice bike it was when it was on the trailer on the way home doesn’t hurt either.  Riding a tiger has a certain magic to it.

When I want to turn a wrench I’ll work on the XS, getting it rolling again for the first time in years.  I’ll get the ownership sorted on it (affidavits are required!) and eventually sell it without losing a penny, and then I’ll go looking for my next project bike.  Maybe a scrambler Versys, maybe an old Interceptor, maybe something I haven’t thought of yet.

Time for some unbridled Tiger enthusiasm! 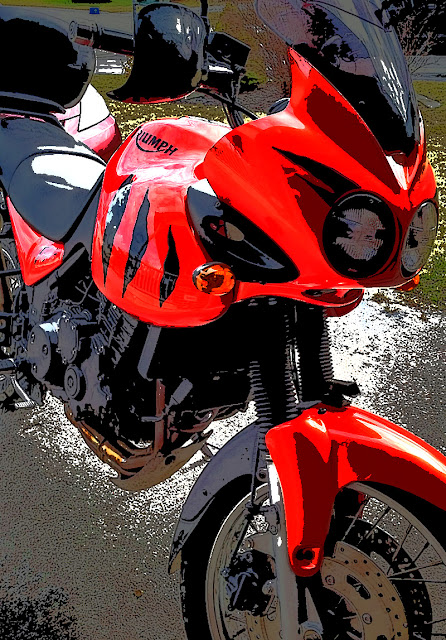 Tyger Tyger, burning bright,
In the forests of the night;
What immortal hand or eye,
Could frame thy fearful symmetry?

In what distant deeps or skies.
Burnt the fire of thine eyes?
On what wings dare he aspire?
What the hand, dare seize the fire?

And what shoulder, & what art,
Could twist the sinews of thy heart?
And when thy heart began to beat,
What dread hand? & what dread feet?

What the hammer? what the chain,
In what furnace was thy brain?
What the anvil? what dread grasp,
Dare its deadly terrors clasp!

When the stars threw down their spears
And water’d heaven with their tears:
Did he smile his work to see?
Did he who made the Lamb make thee?

Tyger Tyger burning bright,
In the forests of the night:
What immortal hand or eye,
Dare frame thy fearful symmetry?