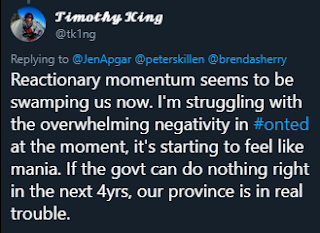 While I was attending the Future of Work Summit with ICTC at the MaRS Centre in Toronto, just down the street Ontario’s teacher unions were having their yearly meetings.  The social media runoff from those meetings, and from Ontario Education in general, has been increasingly and overwhelmingly negative.  As I’m listening to talks about how to increase our flexibility and reduce institutional lag, the education system around me is going into a state of rigour mortis as it stiffens up to the point where nothing is acceptable and everything is rebuked out of hand.


In my time teaching in Ontario I’ve watched the provincial government break the law and end up paying millions in reparations as a result.  That mess was treated like a blip compared to what has been happening recently.  Before this new government even did anything we were warned that it was all going to hell.  Things went to hell with the previous government too, but that seemed to be ok because, ultimately, our unions had ongoing relationships with that government.  This is the first time I’ve seen Ontario education operating under a non-Liberal government and it isn’t pretty.  There was always some flexibility of approach previously, even when what has happening to us was ridiculous.  That flexibility is gone now.

I’m well aware of what happened the last time a ‘progressive’ conservative government ran Ontario education into the ground.  At that point it was described as a needed financial correction from the previous NDP government, but the Financial Times doesn’t graph it like that.  Mike Harris and his government sold off money makers like the 407 to balance a single year and look fiscally tight.  It’s that kind of self serving short sightedness in our elected officials that frustrates me.  What I find strange is that Ontario defaulted to conservative leadership for many years, and in that time could depend on governance that wasn’t populist and myopic, but recent attempts seem to be all about violent correction catering to special interests without any long term intentions.


Ontario needs to get a handle on its debt and we need a capable leader who is willing to lead by example to do it.  The problem with Ontarians is that they won’t vote for someone like that.  Instead they are swayed by buck a beer huxtering.


Frankly, I don’t care whether they are liberal, conservative or NDP, but I do care that it happens.  We’re paying billions servicing debts we can’t afford.  If it has to be austerity, then it needs to be austerity for all.  I’d be willing to buckle down and do my best with larger classes and lower budgets if I felt that everyone else wasn’t voting themselves higher living allowances and inventing redundant jobs for friends.


Squeezing the system generally won’t yield the kind of savings we need, and it damages learning conditions for students as well as teachers.  Ontario students are some of the best in the world.  If we’re willing to sacrifice that excellence to protect a UN sanctioned publicly funded semi-private religious school system, or a questionable standardized testing regime brought to us by an under-performing US model of education, then we’re damaging our excellence to protect inequity and keep ourselves buried in debt.  There are plenty of places we could save billions in Ontario education by making systemic change while protecting the learning conditions of students.  It is only because we are trapped by our history and our selfish, short-sighted, tail-chasing political system that we can’t make the changes needed to make Ontario more sustainable. 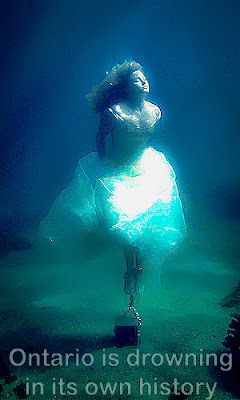 Attending that summit once again got me thinking about how relentlessly and aggressively the best private enterprises chase efficiency.  There is nothing sacred in that environment, it’s eat or be eaten.  That kind of focus really appeals to the technician in me who builds technology based on efficiency and efficacy, but it’s short sighted when dealing with public education.


Working for a system that is ultimately led by politicians who are in turn being led by the short-sightedness of our electorate has never been anything but frustrating.  Watching this government shore up the money-sinks while at the same time hurting learners and damaging our performance isn’t new.  Previous governments did the exact same thing.  There is nothing revolutionary or different about what’s happening now, other than the mass centralization of opposition against it.


Ontario continues to sink deeper into debt even as we’re catering to special interests as we’ve always done.  Things could be better, but the system we have does nothing to encourage intelligent decision making.  If you’re looking for change in Ontario any time soon, you’re not going to see it.  In the meantime, Ontario will drag Canada out of the top 10 worldwide as we intentionally damage one of Ontario’s most popular exports.