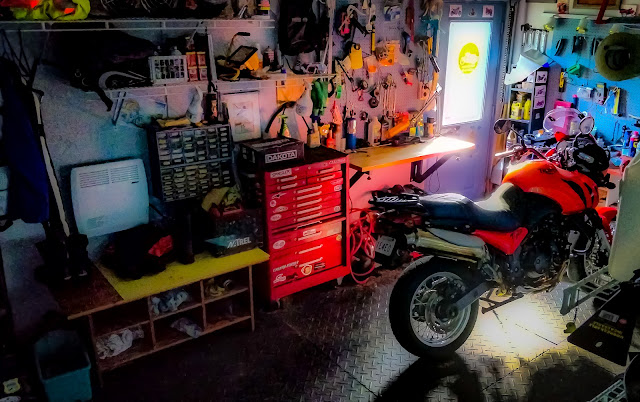 The garage is looking pretty spacious this weekend.  The Concours sold yesterday so the Tiger is alone in the bike-cave for the first time.  I ended up selling it on if I could sell it for what I bought it for, which I did.  I owned it for five years, rescued it from retirement, doubled the mileage on it, had some great adventures riding around Georgian Bay and down to the last MotoGP event at Indianapolis in 2015.


I was ready to go in 2016 when the Concours wouldn’t start.  With the Canadian motorcycling season agonizingly short I lost my patience, but then a Tiger appeared as if by magic and suddenly the Concours wasn’t a necessity.  It’s hard to believe I’ve had the Tiger for three years already; it isn’t going anywhere.


With the money from the Concours set aside, I’m already considering my next project.  I’m aiming for a bike that is significantly different from the Tiger, which is a great all purpose machine, but it’s heavy; a lighter specialist is the goal.  The guy I sold the Concours to already has one and half a dozen other bikes.  Having that many bikes would be a handful, I’ve always been about a functional garage.  Jeff, the motorcycle Jedi, has three very different bikes, that’s the direction I’d like to go in.


In a perfect world I’d have the Tiger, a sports bike and a light dual sport.  A generalist, a tarmac specialist and an off-road specialist.  Time to peruse the Ontario used bike market. 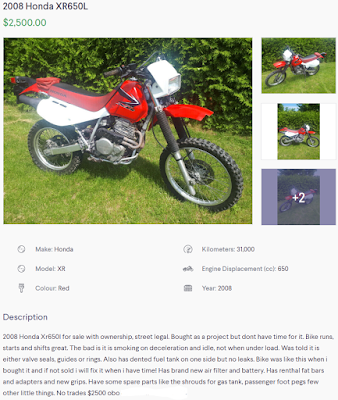 There’s a dual sport in need of some mechanical sympathy.  These typically go for twice what he’s asking.  Parts are accessible and not particularly expensive.  There is a complete, virtually new head on ebay for about $760CAD.  If I could get the purchasing price down to $2200, I could have a virtually new Honda dualsport for three grand that would be worth twice that.


The worrying bit is this guy managed to blow a Honda engine, which are famous for being bulletproof.  If it has been abused (the dent in the tank suggests it’s been dropped, though it’s a dualsport that goes off road, so I shouldn’t read too much into that) then the engine could have more major damage and require big end cranks and such, which could make this a money hole.


The fact that it runs is promising and it does sound like a top end issue – but I’m guessing it’s a head replacement or major remachining situation.  It’s an air cooled single cylinder, so after the complexity of  the water cooled, four cylinder Concours, this’d be lawn mower simple.  I’m tempted. 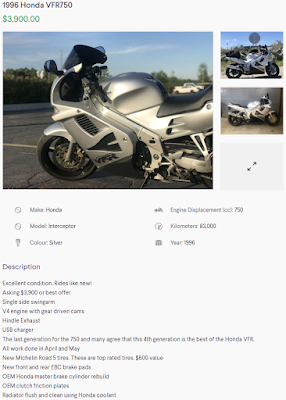 I’ve always had a soft spot for VFR Interceptors, and this lovely example is up for sale at a pretty reasonable price considering how much work has gone into it.  Hugo, the editor of BIKE Magazine recently got one of these and went on and on about how bullet proof they were, so even an older machine like this would be readily usable.

With this RC-36-2, last gen version you get a VFR at the pinnacle of its Honda evolution.  It’s technically considered a sport-touring bike, so you don’t get caned in Ontario’s ridiculous insurance system, and it weighs less than 200 kilos, which would make it the lightest road bike (ignoring the KLX250, which wasn’t really a road bike) I’ve ever owned.


If I could get it for $3500, I’d be able to ride it for years.  Rather than depend singularly on the now 16 year old Tiger, I could split duties between a generalist and a road specialist.  This too is tempting.


It’d be nice to have both, the XR as a project and the VFR as an immediate gratification machine; they would make for a very diverse garage.  I think I could have both on the road for just over six grand CAD.