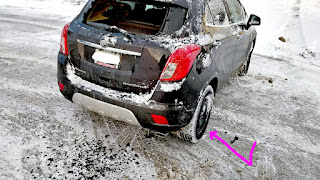 It had been one hell of a morning.  I got to work only to get a frantic phone call telling me to turn around and come back home because a snow plow had backed up into my wife’s car.  An hour later we’d dropped off the car at the repair centre (while finding out it might get written off and/or take weeks to fix) and were on our way to work.  As we approached the last traffic light before work I must have seen something out of the corner of my eye and my foot was hard on the brakes.


I don’t consciously remember hitting the brakes.  In retrospect I must have seen something out of the corner of my eye and instead of ignoring that peripheral warning I instinctively acted on it.  At 50km/hr we were moving at over 3 metres a second.  Had I hesitated or waited for clarity, we would have driven right into a t-bone with the big, V6 American sedan that was running the light at twice the posted limit.

We were just outside of two school zones in a residential area with low speed limits, but that big sedan was easily doing 80km/hr when it blew threw a very red light.  I sat there stunned for a moment, as you do when something happens and you don’t know why.  There were a lot of questions popping into my head:  had I just run a red light because I wasn’t paying attention?  Why were the people in the other car were trying to kill us?  Did we really just come that close to getting clobbered after the morning we’d just had?


As we proceeded through the intersection I double checked the light just to make sure I hadn’t made a mess of this whole thing, but I was still facing a green light.  The guy next to us who was turning left had also stamped on the brakes to avoid the flying Dutchman.  He looked over and rolled his eyes at the situation.  I grinned back uncertainly.  I asked Alanna, “did that just happen?”  After the morning we’d already had this seemed beyond the pale.  As I pulled in to work the implications of what happened were starting to sink in.  In an alternate reality where I didn’t listen to that feeling my son was an orphan and the mouth breathers in that car, if they weren’t scattered down the road, were probably trying to explain to the police how it wasn’t their fault.  No one is responsible for anything any more.


This all got me thinking about what saved us.  Peak performance requires your rational mind to apply itself to practice in order to develop basic skills, but there comes a point where you have the basics in hand and spontaneous, complex action can arise seemingly without intent.  If you’ve ever become competent at a sport you know what this feels like; you don’t think about it when you backhand the puck into the net or make that diving catch.  I don’t think about vehicular control, I inhabit the vehicle. 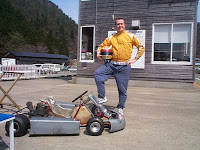 Driving is one of those things I’ve worked on for years, taking advanced classes, racing carts in Japan and expanding my vehicular operation into new areas like riding a motorcycle, which is itself also an intensive exercise in situational awareness.  I have to wonder if the Tim who never took up bikes had the same developed peripheral attention and reacted on it as quickly; riding a bike makes you open your third eye or you tend to keep finding yourself in situations that make you want to quit doing it.

It’s important to cultivate an awareness of your intuition and trust in it.  Your subconscious mind is a much less cluttered and restricted part of your thinking process and can see things with a clarity that your reasoning mind is oblivious to because it keeps getting in the way.  If you have a bad feeling about something, listen to it.

Here is some philosophy to connect the link between intuition and performance:

https://www.scholarsage.com/author/jason-gregory/
“Intelligent spontaneity, then, is a fully embodied state of mind where one is perfectly calibrated to the environment. The environment essentially becomes an extension of your skill.”

This comes out in the summer, I’ll be looking it up:
https://www.goodreads.com/book/show/48229202-emotional-intuition-for-peak-performance