After putting well over a thousand miles on in five days I’ve been able to focus on what works and what doesn’t.  Here’s a quick rundown of the gear used and how well it worked. 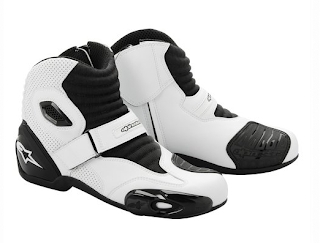 I used the Alpinestar S-MX 1 boots there and back again.  Vented and able to catch air on even the hottest day, I’ve had them for a couple of years now.  They aren’t as clean as the stock-pic, but I like the lived-in look.

Boots were one place where I had no issues – these things are excellent and worth every penny I paid.  They are big rain catchers, but we never saw any rain so it wasn’t an issue. 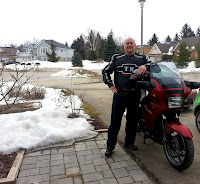 The Teknics Motorsports jacket I picked up at the motorcycle show last January was my jacket of choice.  In cooler temperatures and up to the mid-twenties it works a charm.  It has vents in the arms, chest and back, but the air flow isn’t strong.  On the return trip in 30°C+ temperatures it was sweaty hot though.

Once south of the border helmets and gear became very optional, but I never felt comfortable riding around without kit on.

No jacket seems able to do the full range of temperatures, and other than the sweaty, hot day coming back, the TK jacket did the business. 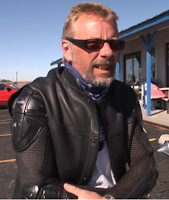 As for warm weather protection I’m still considering my options.  We stopped at Cycle Gear in Indianapolis on the way back and they had Bilt mesh jackets on sale for sixty bucks, but we were running low on space so I didn’t partake.  I’d still like to know what kind of gear works best in the heat.

Henry Cole has some kind of fully vented under-armour when he rides in the desert.  Considering the miles he’s done he must know something.  His kit is Knox Cross Body Armour (I just looked it up).  It’s about three hundred bucks from Motorcycle-superstore in Canada.  It’s a made in the UK ventilated, armoured jacket, but it ain’t cheap. 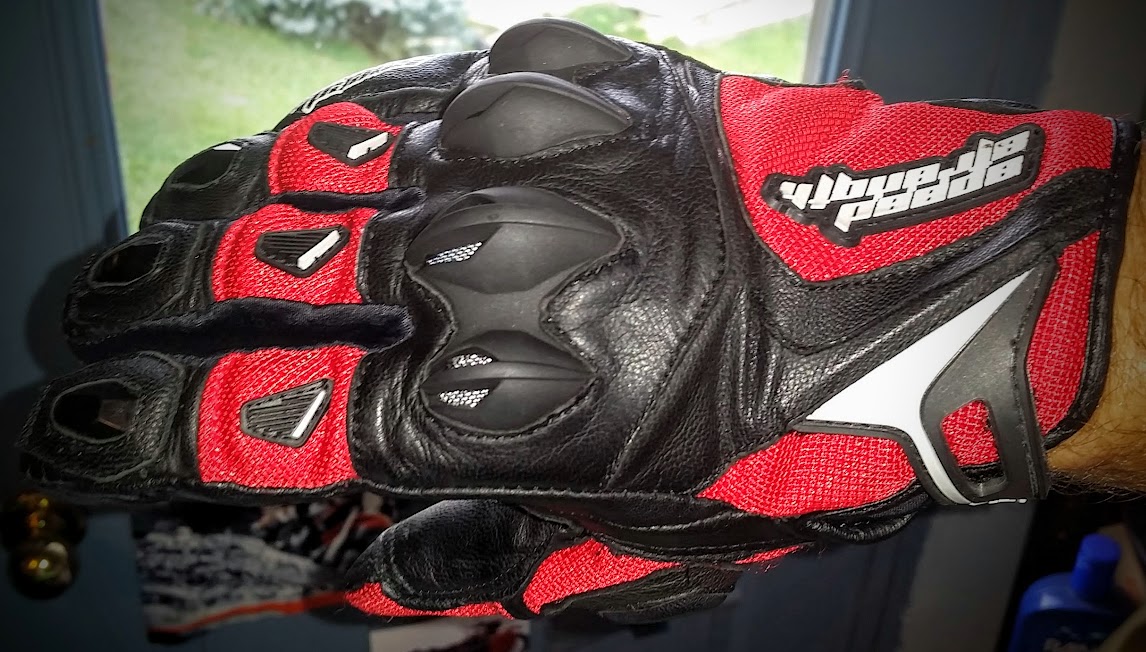 I picked up these Speed & Strength leather gloves this year and they’ve quickly become my go-to glove.  They feel solid with leather palms and full finger padding, but they’re also very ventilated with those knuckle vents moving a lot of air over your hand.  Any glove that is this solid, cool and conforms to your hand this well is a good glove.  At no point did my hands get sweaty or uncomfortable, even after eight hours on the road.  Epic gloves.

My Macna riding pants work well in many conditions.  They ventilate efficiently but still feel comfortably warm when the temperature dips.  I’d never ridden them into this kind of heat before and I quickly found their limit.  The ride down in mid-twenties was great, no problems at all.  The ride back in the thirties is where I found the pants couldn’t get the heat out fast enough.  The heat from the bike didn’t help.  Behind the padding and solid bits you start to drip and it’s downhill from there.

I ended up with heat rash on my butt in no small part due to the pants.  Wearing jeans on the last day was the only way out.  Great pants up to 30°C, after that you begin to look at all the Americans riding around in shorts and wish you could too.

I thought these were the super-ventilated riding pants, so I’m not sure where to go from here. 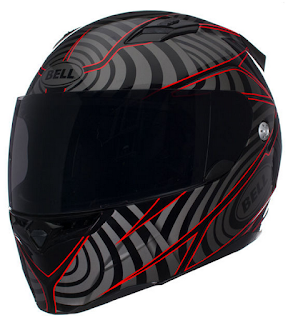 Bell’s Revolver Evo helmet did lid duty on this trip.  Since removing the snaps at the temples it has become all-day comfortable as opposed to agonizingly painful.  The flip up visor works like a charm.  I even left it up on short rides for an open view and some wind in the face.

My only issue is with the flip down sun-visor.  In bright sunlight it isn’t tinted enough.  Other than that this helmet breathes well, looks great and is very quiet for a flip up helmet.  It’s still not cool that I had to cut out snaps to make it work, but hey, you do what’cha gotta do. 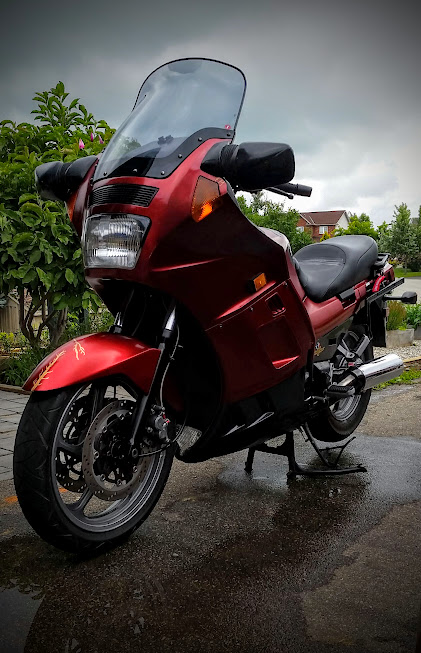 Last but not least was the mighty Concours.  The $800 Kawasaki did the business beautifully.  Averaging in the high 40s MPG, it started on the first touch every time, thundered along never-ending interstates and rolled slowly through a hot night in Motorcycles on Meridian without using so much as a drop of oil (that pic in the link is the oil level when I returned – it had barely moved).

I discovered that with a 250lb rider, 120lb passenger, loaded panniers and top-box the bike could do the ton with ease.  Even when making time on the interstates it still returned better gas mileage than a Prius and never dropped below the high 40s MPG… and all this through four carburetors!

The heat that comes off the engine is an issue, especially on hot days, but the temperature gauge was rock-steady in the lower half of the range.  The radiated heat from the engine makes for hot legs on an already hot day, which isn’t much fun.  I discovered that if I ride with my feet on the outside of the pegs I’d get fresh air and all was good.

The other issue was the seat.  Eight hour days in the saddle gives you real insight into whether or not a seat works, and the Concours seat was agony after about half an hour.  At 45 minutes my ass hurt so much my shoulder started aching, but by an hour fifteen I had become numb.  On the way back Cycle Gear had a gel seat pad for forty bucks, so I gave it a whirl.  The above mentioned heat rash was the result.  The gel seat didn’t have me squirming around so much, but the heat buildup was so intense it wounded me.  I’m left wondering just how magical an Air Hawk is (I couldn’t find one while in Indianapolis).

The Concours is such a capable bike over long distances that I want to conquer the seat problem.  While I was away the astonishingly cheap seat cover from ebay arrived.  It has ribbing and additional padding so I hope it solves the problem.  If it doesn’t, I may have to start working toward that disco Corbin seat.

If I found myself heading down to next year’s Indianapolis MotoGP (assuming they don’t cancel it and there are rumours of just that), I hope to do it in Knox Cross Body armour, some kind of air pants that don’t exist and all while sitting on a Corbin seat.  Other than trying to duct the Concours’ heat away from my legs and addressing the seat there is little else I’d do with this wonderful machine.

As I continue to try new gear bits and pieces stick and become indispensable.  Those Alpinestars boots, S&S gloves and Bell helmet have covered the extremities, and the vast majority of the Concours is brilliant, it’s just the booty and the bod that I need to work on for a cooler and more enduring ride south next time (and I’m hoping there is a next time!).