In the Remember When section I’d sent in the family photos I’d discovered while back home in Norfolk, England in 2013.

It was a real joy to see Grand-dad and a great Aunt I’d never met in pages that I knew were being seen across Canada.

I was then astonished to see that Glenn had also run the article I handed in last year on our ride on Vancouver Island.  Seeing my byline right behind Lawrence Hacking‘s was a real rush!

There is no greater satisfaction for an English major than seeing your writing published.  I’ve managed it academically, but this was my first go at motorcycle media and it was no less satisfying.

The Motorcycle Mojo piece reads well (and I’m a tough critic with myself).  After seeing myself in print I think I might be addicted.  I’m so glad I brought the camera and aimed to write this up from the beginning, it’s like reliving the trip over again, and my son Max is over the moon!

If you’ve thought of writing out a motorbike experience but didn’t, give it a go!  Glenn is a considerate editor and the joy of seeing your words publicized is powerful! 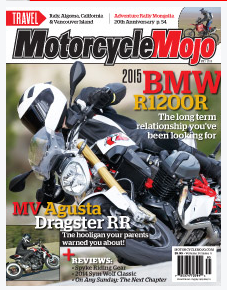