I just measured the valve clearances on the Tiger.  They’re supposed to be checked every 20,000kms, I’ve put 27k on it since I’ve had it and who knows when they were done previously, so this was well past due. 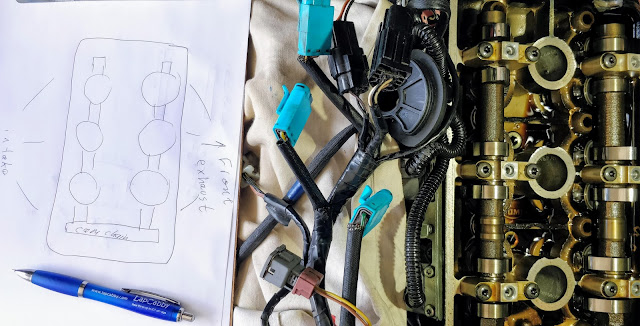 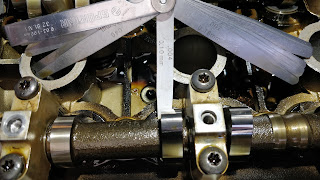 Getting to the valves isn’t that problematic since I’ve gotten gas tank removals down to under 10 minutes while I try and trace down this frustrating inability to idle.  Here are the numbers: 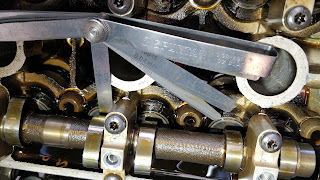 
Turning the engine with the rear wheel in top gear was pretty easy – don’t grab the spokes, use the tire, you get more torque and it turns pretty easily.  As you turn the back wheel you get the cams pointing up, which is when you check clearances by sliding a feeler gauge under the cam and above the shim. 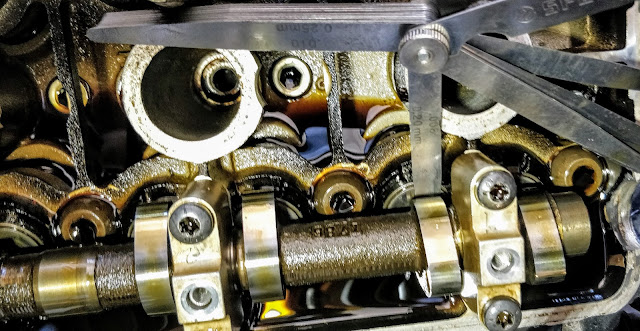 This Spurtar 32 blade feeler gauge from Amazon is a nicely made thing that offered me a full range of tapered ends that covered what I needed for checking valve clearances on this 955i Triumph Tiger.


With the Tiger’s timing pretty much to spec valve clearance wise, it suggests that my intermittent stalling problem isn’t related to valve clearances.  Working on older bikes (and watching Car S.O.S.) has me well aware of what fails on older vehicles:  RUBBER!  Perished rubbers are Tim’s go-to in Car S.O.S. when it comes to restoring an old vehicle – this Tim is thinking that’s the issue with this 17 year old Tiger too. 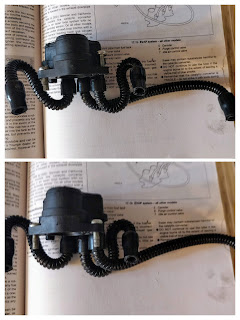 I spent today putting things back together and double checking everything.  The vacuum system that feeds the idle control wasn’t plugged in 1-2-3 (I had it 1-3-2).  That’s something stupid enough that it might be the culprit.  At this point I don’t care what it is, I just want the bike to idle to the point where I can depend on it to not stall on me and leave me hanging.


If I get it all back together and find that I’m still stuck with an intermittent stall I’m going to start systemically replacing all the rubbers in it.  Doing a deep cleaning on the fuel injectors is an idea too.  I ran into an old guy at Canadian Tire who swore by Sea Foam for cleaning fuel systems, so I got a can.  I’ve got some in the Tiger tank for the rebuild which will hopefully be done by tomorrow.  In a perfect world the Tiger will be back to normal and I can go after the valves in the winter if I’m so inclined.  If it’s still stalling out on me, It’ll be a perished rubber hunt next.