Finally got out for an hour today.  Only about 5°C, but sunny.  With a sweater and my swish new jacket I was comfortable behind the Concours’ fairing.  At speed on back roads you only get a bit of wind around the head.  Your hands are protected by the wing mirrors and the rest of you is behind fairing.  The Connie is comfy in the cold.

The bike feels very light once it’s in motion, very flickable.  I’m coming off a Ninja 650r, so I’m riding 350 more ccs, two more cylinders and one hundred more pounds of bike, but the Concours feels quick.  It doesn’t spring forward with a banshee’s wail in the upper rev range in the startling way that the NInja did, but it’s not nearly so peaky either.  It also has suspension more than up the task of dealing with Canadian roads.  Where the Ninja used to rattle my teeth over a pothole, the Connie manages to swallow the worst of it while still feeling very connected to the pavement.

The Concours pulls with urgency off idle, but that urgency becomes an avalanche of torque as the revs rise.  I gave it the mustard off one stop light and was shocked with how quickly 100km/h appeared.  Both bikes are quick, but I always assumed the bullet shaped, lighter, sportier Ninja would have been the quicker of the two, that stop light torque avalanche made me doubt that.  I ended up looking up the stats on both bikes.

While almost identical, how they do it isn’t.  The Ninja needs a lot of throttle and a glib clutch to hook it up in the top half of the rev range, and then judicious gear changes to keep you in the top four thousand RPM through many gears.  It’s a thrilling, high tension rush up through the gears.  With the Concours you drop the clutch at about four thousand RPM and the motor just picks up the bike with no wallow and storms to the redline.  A single gear change gets you up to legal limits.  Where the Ninja had that intoxicating banshee wail, the Concours has a baritone bark that becomes a godlike roll of thunder.  I used to think the Concours inline four wasn’t as happy a creature as the Ninja’s parallel twin, but after hearing the big-four warm and in voice today I’m starting to think she just sings a different tune, but it’s no less happy.

The ride was only about an hour, but I went from constantly comparing the experience to my dear, departed Ninja to wondering just what the Concours is capable of.  As a shakedown after a long winter of maintenance, it has begun the process of rebuilding my confidence in this new machine. 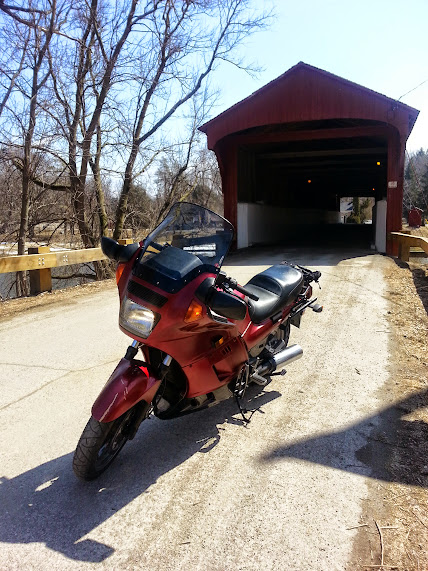