We were beta testing Field Effect’s state of the art Cyber Range online cybersecurity training system this week in our grade 10 TEJ introduction to computer technology course.  Our skill levels in that open class range from two students who are top ten in Canada in the CyberTitan student cybersecurity competition in their respective disciplines, to students who have never owned a personal computer at home because their parents thought a series of gaming consoles would adequately prepare them for life in the Twenty-First Century.

The challenges of keeping students with such diverse skillsets engaged in a single classroom aside, I’d agreed to beta-test this software because it offers a way past one of the biggest blocks to schools entering the Cyberpatriot/CyberTitan competition.  To participate in the competition you need a desktop or powerful enough laptop computer being run by an operating system that can do more than just browse webpages through a single corporation’s lens.  Virtual machines are whole computers that can be simulated in a single window, and they offer a valuable tool in examining cybersecurity issues without putting your school network or computers in peril (installing a virus to see what it does on a school computer would produce obvious headaches).  If things go wrong in a virtual machine you just shut the window.
The Field Effect remote software ran fantastically well on our DIY student built classroom desktops and would work equally well on something as simple as a Chromebook,though trying to do this through a single, tiny 1366 pixel wide monitor would be a headache.
Once we got everything up and running I reminded students that they were manipulating a remote, virtual computer stored on a server in Ottawa.  When you’re aware of what’s happening behind the screen, seeing what we can do on networks with enough bandwidth, like the one we now have at school, is mind blowing. 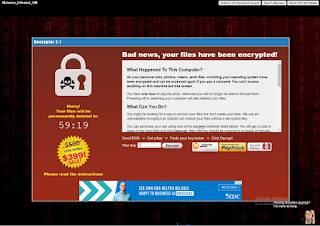 The cybersecurity gurus at Field Effect didn’t muck about when they set up this virtual online image.  When you first boot up the compromised Windows 10 image you’re met with a full screen warning with flashing lights and a locked screen telling you that you’ve been ransomwared.

I realize that cybersecurity scares the daylights out of most people (I’ve spent the past 3 years trying to engage Ontario educators in it to poor effect), but if we’re going to be putting more and more of our education system into digital spaces then we’re all responsible for raising digital fluency to the point where everyone can demonstrate resiliency in the face of unexpected outcomes.  At the moment, throwing up your hands in the air and giving up seems to be the solution for too many people.  Hopefully things like ICTC’s work with Field Effect will help spread a deeper and more resilient tool for improving cyber-fluency.  Everyone working in the cloud needs this.