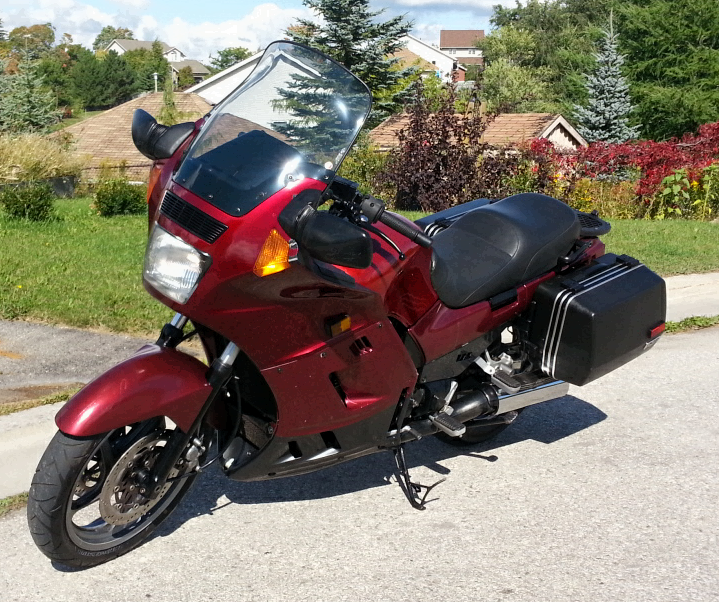 I took the Concours out for a brief ride in the sun this afternoon to get a feel for her.  She’s a very different machine than the Ninja.  The carbs are a bit touchy when warming up, but then work in a very satisfying and immediate mechanical way once the bike is at temperature.  It’s a much bigger bike too (over two hundred pounds heavier), but surprisingly lithe for its size.

Where the Ninja picks up nicely in lower RPM, the Concours pulls immediately with a much flatter torque curve; the word ‘meaty’ comes to mind.  The Concours was also surprisingly lively at higher RPMs, pulling hard to the redline.  Not like the Ninja does (which is more like a bull in a China shop), but it still gets you down the road right quick.  The lightness of the internal bits in the Ninja’s 649cc parallel twin make it spool up like a turbine.  You can feel the complexity and weight of the Connie’s in-line four cylinder as it builds RPM.  Where the Ninja screams like a banshee (and sounds lovely doing it), the Concours has a deeper, more sonorous song, though (and surprising to me because I really love the Ninja howl) equally enticing.  I can see why previous Concours owners have said they’ve had no trouble keeping up with sports bikes, this is an agile, athletic machine that belies its size.

In corners, especially at speed, the weight of the Connie seems to disappear and I can hit apexes in a similarly precise manner to the much lighter NInja.  With so much torque on hand, you don’t need to keep the engine revving hard to get immediate pull out of it.  The Connie will go quickly without appearing to, with the Ninja you’ve got to keep it on boil to get that astonishing acceleration (as opposed to merely shocking acceleration at lower revs). 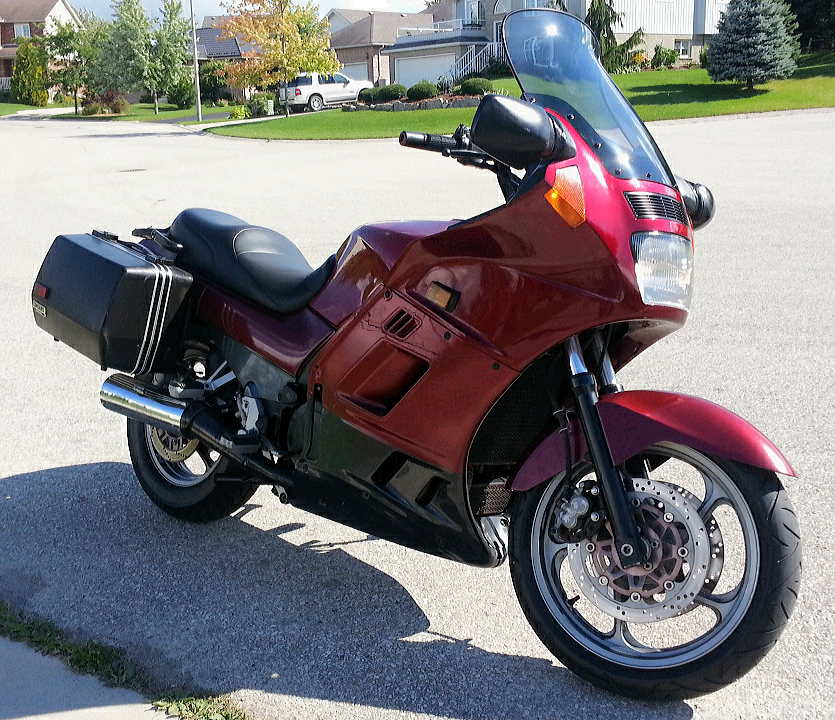 Controls wise the Concours is a much more comfortable machine.  The seat is wider and softer, the bike feels more substantial and not so wasp wasted between my knees.  The fairings keep the wind at bay, especially around  your feet.  In the rain your feet are soaked through on the Ninja where they are hanging out in the elements.  Riding in cool weather means thick socks.  I kept bumping my toes against the Connie’s lower fairing until I got used to using less toe on the gear change.  Knee bend is still pretty bent, though not nearly as much as the Ninja and with the wider seat didn’t seem so intense.

The Connie’s gearing is much higher than the Ninja’s.   At 120km/hr on the highway you’re up around 6000rpm on the Ninja.  I’d guess the Connie would be doing under half that at the same speed.  A more relaxed bike that still has hidden reserves and is light of foot, I’m looking forward to getting to know Connie better.

As I was riding home we fell into a groove, like a horse extending its legs into a comfortable gallop and I realized just how far this bike could take me.  She’s been sitting too long and wants to put road behind her.  Instead of wondering when to stop on the Ninja, I’ll be wondering how much further I can go on the Concours.