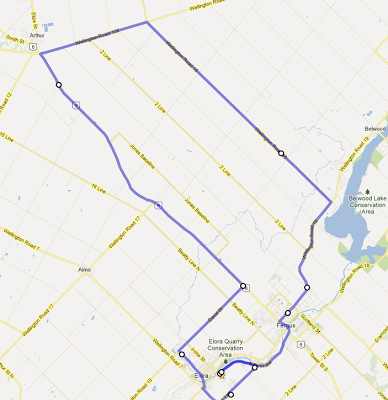 Nothing like a bit of media making on your ride.  This video is courtesy of a GoPro Hero electrical taped to the rear right passenger foot peg looking out over the back wheel.

The route is 60 kms through Elora, Arthur and Fergus.  It ended up being 51 minutes of footage, but I clipped it down to 12 minutes so it would fit on the youtubes.

Here’s the video!  That GoPro takes mighty nice footage, even at higher speeds…


Running electrical tape over the camera 4 or 5 times kept it securely in place for the whole ride and came off afterward without leaving any tape marks.  Putting it on the right side passenger foot rest means it was just above the muffler, so you can hear the engine clearly and wind noise wasn’t too bad because it was behind the fairing and my leg.  Having it on the frame rather than the suspension means that it doesn’t bounce around as much as it otherwise would.

If I ever get some time on a race track, I’m totally taping a GoPro on for a few laps.