I can remember being about six or seven and playing in my grandparent’s yard in Sheringham. 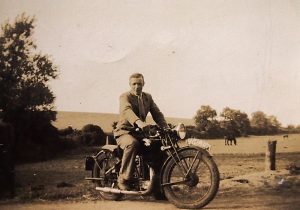 Suddenly there was a rough, mechanical roar coming from the road.  I walked over to the fence, climbed up and watched in amazement as a stream of vintage vehicles rolled by, everything from Bentleys, Jaguars and old MGs to motorbikes with side cars.  When it’s 1976 in the UK, the vintage vehicles you’re seeing are all war-time or earlier – MG, Triumph and all those ‘old’ British manufacturers who have disappeared were still building cars when I was standing on that fence waving to the drivers in their goggles. 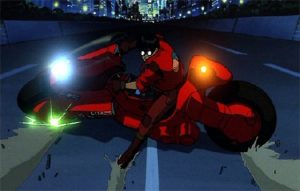 In the 1980s I got into Japanese animation. From Akira to Robotech to many other anime, motorbikes have taken the samurai’s horse into the modern era.  Anime definitely plays into my idea of what makes a cool bike – if it can transform into a robot then so much the better. 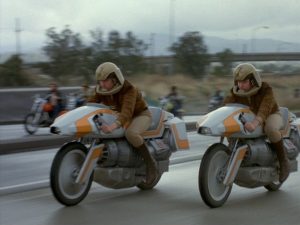 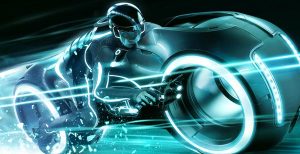 The ’80s anime also informed a lot of ’80s TV shows and movies, like Battlestar Galactica and Tron.

The idea of motorbiking has media romance all the way from Lawrence of Arabia to The Great Escape.

Between the sci-fi fixation I had as a kid and the romantic notion of motorcycles in media, I think it safe 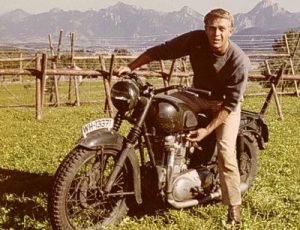 to say a classic/futuristic vibe drives my motorbike aesthetic.

If anyone ever invented a steam punk motorbike, I’d be all over it.

In the meantime I’m all about bikes that call back to a mechanical simplicity, or look like they come from another planet.

Some of my favorites gleaned from wandering about the interwebs:

Triumph and Suzuki to Royal Enfield and Honda; ranging from classic, naked bikes to modern naked bikes and sport/touring/adventure bikes.  I’ve got no interest in cruisers, choppers; they sacrifice way to much in the way of physics for looks.

A naked bike is a throwback to those classic bikes I grew up with, but they incorporate the latest technology: the best of the old and new!

I’m not completely anti-fairing, but it’s nice to see the mechanicals working, it speaks to a simple aesthetic that I find appealing in a motorbike.

Some other bike aesthetics that have caught my attention:

Long Way Round: gets me wishing for an epic trip with weeks on the road… like, say, A Pan American Motorbike Diary!

The KLR has been of interest, but my first bike ends up being a Ninja…  The go anywhere nature of the KLR makes it ideal for my Pan American trip, and lets me dream of following Ewan and Charlie on an epic, life changing adventure. 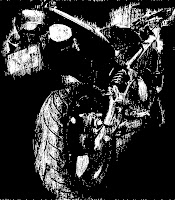 Once I’ve spent more time in the saddle, I’ll have a better idea of what a bike can do for me and what I look for in a bike, but in the meantime, my entirely academic aesthetic interest in motobiking is what I’ve been going on.

My first bike ends up being a Ninja… very anime it is!  It won’t be my last!