I’ve always wanted a motorcycle.  The simplicity and immediacy of the relationship between rider and bike has always appealed.  Finally, at the age of 43, I’m becoming a rider.  A couple of weeks ago I sat in an MTO drivetest centre and wrote my M1, so I’m now licensed in the most rudimentary way.  Next weekend I’m taking my training course at Conestoga College in Kitchener. Following that I hope to be on the road.

This blog will trace the process and development of my riding.  I’ve dug up a couple of entries from another blog that show why I’ve gotten into riding now.  They should provide some background for what is about to happen next.

A Nice, Canadian Magazine to get you into the hobby…

In the meantime, I’ve been looking through motorcycling magazines trying to find one that fits.  I’m not a Canadian publications at all costs kind of guy, but Cycle Canada offers smart writing on a wide range of subjects related to the sport (hobby?).  Being a rider in Canada is sort of like being a surfer in Greenland, you can do it, but you’ve really got to want to.  The place itself isn’t really conducive to the activity.  I feel like Cycle Canada approaches this with honesty, humour and wit, while peeling off many of the preconceptions around biking.  Before I began reading it I thought most people think Harleys are the be all and end all of motorbiking.  I was glad to learn that they aren’t.  I like ’em so much, I just subscribed.

Getting Your Bike License in Ontario

Getting the M1 was easy enough.  Ontario has a graduated licensing system for becoming a motorcycle rider now.  The M1 is a sit down, multiple choice test on the basics of motorcycle operation (which you pick up from a Motorcycle Handbook you can get for about $17 from any MTO licensing office).  There are also multiple choice tests on road signs and basic driving situations.  There are 20 questions in each set and you can get up to four wrong and still pass (so you need an 80% on each piece).  I’ve had my G class (regular car) license for 26 years, I didn’t study for either of the general quizzes and got only 2 wrong.  If you pay attention to your driving, I’d suggest focusing on the motorcycling handbook.  If you have no idea what is happening around you or what signs mean, it might be time to review the general stuff.

I should add, the general driving portion was very wordy.  Remember those long math word problems you used to get in school?  Like that.  It was almost like it was designed to test your ability to parse complicated text more than it was about rules of the road.  Be ready for that and take your time with it.

You have to go to a drivetest centre to write the M1.  There are many scattered around Ontario but only a few open on weekends.  It took me a couple of hours to get to the counter, write the test and then get the results.  They tell me it isn’t always that busy.  The old guy who blocked the only open gate for an hour arguing about his license didn’t help.  The M1 costs you about $17 to write.

After the M1 written piece, the idea is to go out and get experience.  You have 60-90 days with your M1 before you have to move on to M2.  M2 you can have for up to 5 years, but if you let it lapse after that you’ve got to start over again.  After your M2 road test you become an M licensed driver with full privileges.  Conestoga College offers a driver training course for beginners that moves you from M1 to M2.  I’m signed up to go next week.  It costs about $400 and I’m told you’re at the bikes they provide a lot over the one night and two day long course; it’s very hands on.  At the end of that course I’ll have done what is needed to pass the M1 driving test to move on to M2.  M1 means no driving at night, or carrying passengers, or 400 series highways, and no alcohol in your system at all.  M2 is still no alcohol, but you can do the other things.  You usually have to wait 60 days to get your M2, but if you take the course they shrink that time.  I should be able to push up to an M2 in mid-May after taking the course in early April.  I plan on riding at the M2 level for at least a year or two before getting the full M license.

I called the company that I’ve been with since I was a teen (who has made a small fortune off me) and asked for a quote on motocycles.  They told me to come back in two years.  They then said I should call Riders Plus.  They were very helpful.  Talking to a friend afterward, he’s been riding for thirteen years and has been with Rider’s Plus the whole time.  He’s paying about $600 a year for a 2000 500cc Ninja.  I’ll be paying about $1300 a year for a 2007 650 Ninja, to give you an idea of what the insurance looks like. 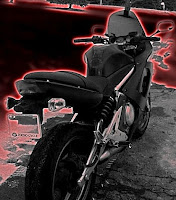 I’ll throw on a couple of older posts showing what I’ve been reading and why I’m going through this now.  Over the next few days it looks like I’ll become the proud new owner of a 2007 650r Ninja that has been painted an unfortunate flat black by an adolescent male of questionable taste..  With the bike in the garage and the course next weekend, I should be insured, plated and on the road by mid-April.

More to come as it happens.