I just spent a brain busting three days wandering around Amsterdam.  It was my first time there, and like all travel to new places it pushed my thinking in a number of ways.

The Van Gogh Museum is one of those must visit places while in Amsterdam.  The main thrust of the current display is his development as an artist.  This has strong undercurrents for anyone in education, teacher or learner.

Like all original thinkers, Van Gogh didn’t suddenly wake up one morning full of genius.  Genius is often presented to us as an unattainable brilliance, something normals can look at with wonder and awe.  There is a hidden assumption of a magic, genetic advantage in this presentation of genius, but it isn’t true.

Vincent’s early career was full of formal and informal learning opportunities that he took and walked away from.  His early work is rough, even poor, but he improved with practice. Van Gogh learned what he needed to learn and then moved on, usually completely out of sync with whatever the curriculum or his classmates were doing – it was a self directed curriculum.  I imagine he was a failure in every way on his report cards.  However formal education helped or hindered him Vincent moved on, a self-directed learner voracious for an opportunity to learn more about his craft.

Self directed learning is a key aspect of mastery.  Walter Gretzky once responded to a reporter who described Wayne as a natural born talent.  He said this was nonsense.  Before school every day, rain or shine, Wayne would be out with a hockey stick in hand.  Every day after school until it got dark he’d be out with a stick in hand; mastery is never a gift.

Any talent you’re born with isn’t mastery, it’s probably something simple, like being ambidextrous.  Real craft mastery is only earned through the old adage: blood, sweat and tears.

The only thing that people like Van Gogh, Gretzky or Einstein bring to their mastery naturally is a fascination, an inborn love of their area of study.  That atypical fixation allows (forces?) them to ignore just about everything else in order to hone their craft in a way that the typical, disinterested, distracted, minimally engaged human being never will.

It’s vogue these days to assume that everyone is a genius is some way, they just have to find out what it is.  After visiting Vincent’s museum and immersing myself in his work for a few hours I couldn’t help but think that true genius is something well beyond what most people are capable of.  Most people don’t have the will power or focus to master simple skills (driving, reading, writing) let alone the relentless drive to open up new areas of human endeavor.  Real genius also leads to emotional crisis and a ghettoization of the person struck by it; others find your obsessive fixation frightening.  That so many geniuses suffer the fate that Vincent did isn’t a surprise.  That we admire genius from a safe distance isn’t a surprise. 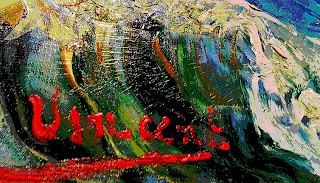 What I did take from Vincent’s development as an artist is that his mastery was a function of an unyielding and constant development of his skill.  If you want to develop mastery in anything, anything at all, a genuine relationship with your craft is what you want to cultivate.  If you’re able to nurture and maintain that intimacy with your craft you’ll find mastery.

The trick, if you’re not a natural obsessive, is not to fall out of love with what you’re learning.

In a classroom, demonstrating a genuine affection for the material you’re teaching and encouraging this in students might be the closest many of us ever come to genius.  It’s a shame that education doesn’t recognize a love of a subject in learners and teachers alike.  We make gestures towards the lifelong learner but do nothing to acknowledge its presence in students or teachers.  A living fascination with your learning is the surest path to the most effective, most enthralling kind of education (and life) you could hope for, and, as Vincent will tell you, the only road to mastery.

Note:
I was in Amsterdam after returning my Mum’s ashes home.  Her suicide was on my mind as I wandered through Vincent’s work.  She too was an artist, a talented one, and her work often consumed her.  I’m still not sure whether to take Van Gogh’s meandering trip into madness as a warning or a comfort.  In the end we all die, it would be nice to think that our fixations, though they may eventually claim us, would also allow us to create some beauty to be left behind in the world.