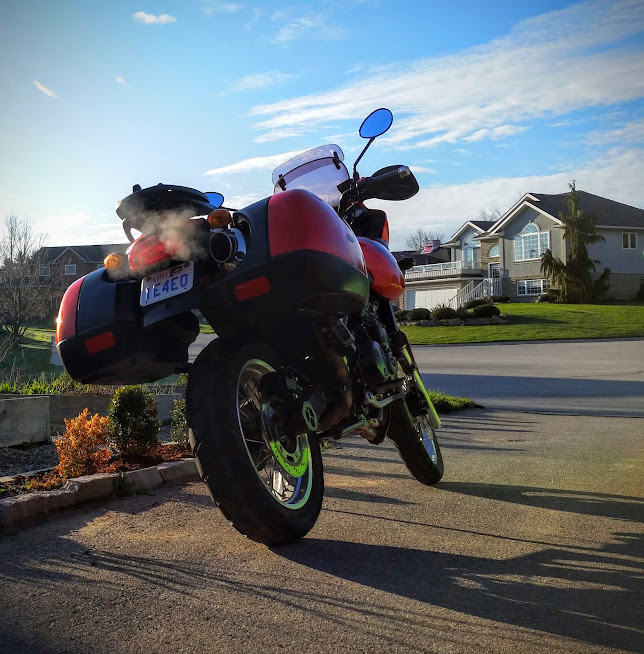 I’ve been putting miles on the Tiger and have a developed some ideas about why it’s awesome in comparison to what I’ve come from.  Here they are in no particular order:

1… The tiger growls.  The Ninja had a nice snarl to it with its 270° twin, and the Concours’ massive inline four thundered like a Norse god, but the tearing silk growl of the Tiger can be virtually silent (less noisy than the wind) when I’m cruising, or growl like its namesake when you twist the throttle.  It has enough presence to make people jump when you give it some revs – maybe because it’s so quiet otherwise.

The 955i Triple (an epic engine) has that same lopsided warble that the Ninja had, but amplified by a third cylinder.  I’ve had a twin and a four, but now that I’ve gone triple I don’t think I’ll ever go back, it feels like the best of both worlds.

2… Lithe tigers are fun tigers.  At 50 kilos (almost 110lbs!) less than my last bike, the Tiger does everything better even though it’s taller.  From backing it out of the garage to winding it through corners, I don’t miss an ounce of that chubby Concours.  While the Connie hid its weight well in motion, it was always lurking in the background.  There is no substitute for a lighter bike. 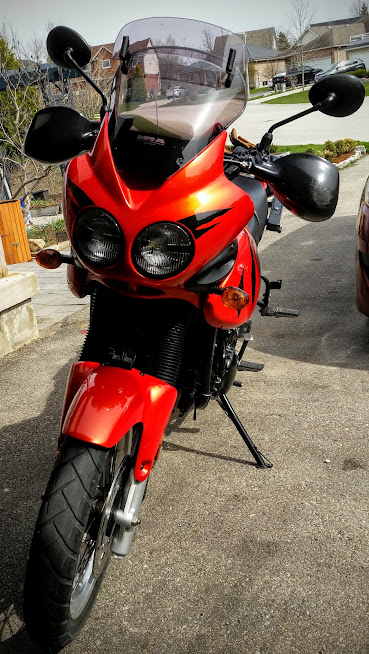 3… Hot tigers aren’t so hot.  The cowling was nice on the Concours, but the volcanic heat that came off that engine cooked my man parts.  I might be hanging more out in the wind on the Tiger, but that’s kind of the point of motorcycling.

The engine barely seems to produce any heat at all and what there is is so well managed that I only occasionally feel a breath of warm air.  Time spent in the saddle is cool and comfortable, and much less like meatballs in hot sauce.

The one place I’m warmer are my hands.  Between the hand guards and heated grips I’ve been able to ride the Tiger in near zero temperatures with no issues and without winter gloves.  My legs went from getting cooked to being one of the coolest parts of me when I’m out on the bike.

4… It’s not wise to upset a tiger.  Between that radical weight loss and an engine that puts out 7 more ft/lbs of torque 2000rpm lower than the Concours, the first time I wound out the Tiger it almost wookie-ed my arms off.  It’s amazing what a small bump in engine grunt and massive weight loss can do to a bike’s forward velocity.  The Tiger will comfortably lift a wheel in the first three gears, and it isn’t a little bike.

5…  Suspension that soaks up lousy Ontario roads.  Kawasakis have a rep for budget suspensions.  Between that and the barely paved roads of Ontario, I’d often hit bumps that would lift me out of the seat and rattle my bones.  This led to constantly worrying about knocking something loose on the bike.  The long, pliant suspension of the Tiger makes Ontario’s wonderful roads ride-able without any such worries.  Another benefit is that I’m able to corner and brake more effectively because the bike is never juddering over potholes, it just soaks them up.

6…  Lucifer Orange is magical.  I’ve yet to own a bike that a coat of spray paint didn’t radically improve, but there is only so far you can go with a can of spray paint.  The clear coated, metallic, red-orange on the Triumph is mind-bendingly brilliant.  Sure, the tiger stripes are a bit over the top, but that paint can manage it. When my eleven year old first saw it he said, ‘oh yeah!’.  Pulling up behind a school bus creates an avalanche of kids in the back window giving me thumbs up.  It’s the opposite of the too-cool-to-care leather clad biker pirate, but I’d rather give an enthusiastic thumbs up back than sit there trying to look indifferent about everything.

I picked up my first ROOF helmet last summer, and it has quickly become my go to lid.  The combination of an open face or fully safetied close faced lid (most flip up helmets only pass open face standards, the chin guard is ornamental) makes this a brilliant all-rounder.  I got it in orange because I liked the design, but it happens to look splendid and intentional with Triumph’s Lucifer orange.  It’s a happy accident, but I’ll take it.

7… It fits.  Less bend in the knees, my feet just go flat on the floor, less bent forward riding position with no weight on the wrists with a comfortable, upright stance, the Tiger fits like nothing I’ve ridden before.

Those wide bars mean I can leverage corners easily and with precision.  Other than keeping you tight to the bike aerodynamically, I’m not really sure why sportier bars are considered better, the wider geometry encourages finer control.

I also look like I fit on the Tiger.  I looked like a circus bear on a tricycle on the Ninja.  On the Concours I still looked like I was too tall for the bike, but the Tiger fits my 6’3″ frame like it was made for me.


8… the bad things aren’t.  The first owner seems to have addressed every shortcoming on this Tiger.  Last night was my first time out with it after dark and the supposedly anemic headlights were as good as the Concours’ lights ever were, and when I hit the highbeams it was like having a football stadium light up in front of me.

The fueling is smooth and perfect, and I haven’t even fine tuned the Power Commander on it yet.  The front fork does dive a bit under heavy breaking, but some adjustment seems to have resolved that and made the bike respond to my weight perfectly.  I have no trouble getting the Tiger to chase its own tail around corners.

With the second wing on the windshield adjusted I have at least as much upper body wind protection as I did from the fully faired Connie, so I’m not missing all the plastic of my last bike either.

9… a made in the U.K. success story.  Riding a British bike fills me with pride.  Riding such a good British bike makes it even better.  Triumph’s rise from bankruptcy in the 1980s to a multi-million dollar, international success story suggests that British manufacturing is anything but history, and that British habits around manufacturing can change and become competitive in a global economy.  It’s nice to ride such a fine machine made in the same place I was.

10… brilliant panniers.  I’ve enjoyed built in luggage since the Concours, but the Tiger panniers are totally next level.  Unlike the finicky attachments on the Connie, the Triumph panniers slip on and off effortlessly and lock into place as well as locking closed.  They are a good size and look right on the bike.  That they’re colour matched is just another bonus.

As you might have gathered, I’m enjoying Triumph ownership so far.