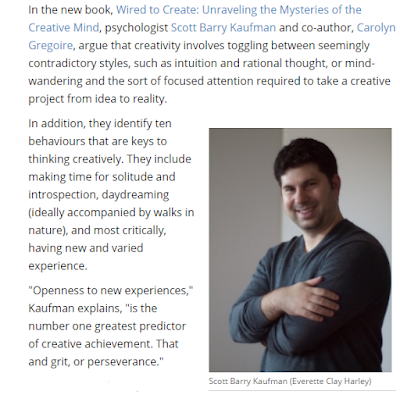 CBC’s Spark had an interview with Scott Barry Kaufman this week about his theories on creativity.  His identifiers for creativity include solitude, introspection, daydreaming and having new and varied experiences.  This reads like a laundry list of things education does poorly, or not at all.

The linear and systemic nature of learning in the education system is always on my mind as summatives happen and semesters end.  As I watch the system trundle towards final assessment (which means a lot of number generation), I’m always left wondering where the learning went.

Sometimes the internet feels like a meme confluence.  In this case related ideas of creativity and play mix together, making me question education’s intent in designing learning environments that stifle both things.  From the education system’s perspective, play is what you do when you’re not learning, that’s why they call it recess, yet Kaufman and a number of other thinkers believe that play is an incredibly rich learning opportunity.

A tweet by Mathias Poulsen on the marginalization of play in society got me thinking about the role of play in learning.  Play and creativity are inexorably linked in my mind.  When I play I create.  When I create, I’m playing.  I usually learn an awful lot in such a rich environment as well.

There are two aspects of modern society that drive the control paradigm Mathias refers to in his tweet.  Both flourish under the watchful eye of neo-liberal value theory.  Data collection is one aspect of this economic/social model and it’s happily provided by digital technology which seems designed to produce this sort of data.  With everything itemized the next step is to monetize it.  With absolute oversight better profits are ensured, but only for the people who can afford the absolute oversight.

Modern economic theory touts data driven metrics as the way toward a more perfect efficiency, and education has been eager to leap on board this very rational (at least that’s how it’s marketed) approach.  By quantifying everything we’re able to better manage people and property, not that there is a distinction.  The people who manage us are obviously big fans of this data driven approach.  It lends the air of mathematical credibility while also offering an automated ease of use.  No more worrying about people as people when you’re managing them from data.

It seems like an air-tight trap.  You are what you do and we can produce oodles of data that show what you do.  But there are aspects of human being that still defy the data driven trajectory of our society.   Creativity and the play that causes it to bloom are a pain to try and quantify and manage, even with the latest analytically insightful digital tools.  The only way education has managed to make data from a process as complicated as learning is to grossly simplify that learning in order to produce data to feed the machine, but play and creativity defy even this heavy handed approach.  You can grossly simplify learning with standardized testing, but all the testing in the world can’t capture creativity.

The best corporate thinking suggests making a fertile space for creativity and the play that can produce it, but keep management out of it!  Education isn’t as driven by the need to innovate and tends to model its management practices after classroom management anyway.  Education, with its hierarchical thinking and conservative approach, is a much riper environment for data driven absolutism than business ever was.

As a result of this data-driven press, play and creativity are increasingly foreign to the modern classroom.  If it can’t be itemized, quantified and easily compared it isn’t really useful as an aspect of learning; it’s not part of the system.  This is backed up by serious people with data who talk about how a rigorous, intellectually meaningful curriculum can only happen through the mathematical certainty of data-collection.   Less time is given to play and creativity is re-cast as something only geniuses (or the very rich – they’re often the same) have, you can’t learn by practising it.  Students are encouraged to get in step with the ‘real world’ and produce quantifiable material by following transparent and unwavering rubrics, lesson plans and standardized tests.  The data produced in this fish-bowl of honesty allows the education system to accurately and completely (except for the bits we ignore) evaluate student ability and direct them to the most efficient career pathway.  This is handy because career pathways are the only reason schools exist any more.

One of the benefits of a liberal society is the generation of a thriving creative class.  If we can’t compete on the cheapness of human labour (because we don’t the produce quantity of people other societies do), then we can compete on creativity.  Except our data driven approach to learning (and everything else, really) means we are letting creativity atrophy in our children.

The only people who think creativity is a natural talent you can’t teach are people too lazy to nurture their own.  Those kind of people really like data driven thinking because it means they don’t have to do much thinking themselves.


The answer is yes.  Sir Ken is a popular educational trope.
Teachers are encouraged to watch a video that criticizes
education and then they’re told to prepare students for
standardized tests and grade them with numbers.

Like any hard-won skill, creativity demands commitment to change, metacognitive clarity and growth, and it can be frustratingly non-linear.  One sure way to spark creativity is to create an empty space, the solitude Kaufman spoke of, in which your mind is encouraged to produce its own outcomes.  This can’t happen in an always-on society where your attention is constantly being sought by digital thought merchants who have monetized your attention.  The habits you develop in this brave new world are so orchestrated that your mind quickly forgets how to structure itself; it comes to depend on digitally structured environments.

Another way to spark creativity is play, but not the kind of pre-determined outcome play you find in video games.  Play in those situations is more like the training of a Pavlovian dog; small rewards for correct behaviour.  You win because you’re scripted too.  Open ended play means there isn’t a script to follow, there is no right way to do it.  It means there isn’t a specific outcome, you’re back to conditioning when you demand specific outcomes.  In play-space the outcomes are often unexpected, and can’t be described in win/lose terms (once again, a specific outcome).

Creativity has no required outcomes.  The creative process does produce outcomes, but they aren’t handed down from on high by curriculum, nor do they look alike.  In a class of thirty students (not much solitude there, but you deal with what you’re given), each creative outcome may look so unlike the others that it is nearly impossible to track them all back to the same starting point.  As a standardized test result this is a disaster.  How do you rubric that?  How do you grade creativity?  How do you determine if Billy is 3% more creative than Bob?  The system demands numbers, you better give it them.

Fortunately, education has found a scripted way to insert play into learning!  Gamification connects well with educational thinking because they both are directed toward predetermined, specific outcomes.  When educators get all giddy about applying gamification to learning they are harnessing the current digitally driven social trend of attention engagement for their own ends.  They might feel that using this rather nasty process for the good of learning makes it alright, but the ends don’t justify the means in learning.  How you do it matters.

Gamification isn’t play.  You don’t magically produce play by gamifying a lesson plan, though our data driven reflex will happily accept this absurd simplification if it makes us feel like we’re with the times, and producing the same thing that Google and Apple are looking for: engagement.  Teachers and multi-nationals all looking for the same thing?  That’s got to be a good sign.  Our students are trained by financially bottomless digital giants to spend hours connected online.  Education should harness that reflex, right?

You can lead a horse to water, but you can’t make it drink, unless you can exactly measure the horse, the distance it has to travel and its circumstances and then manipulate the environment so that drinking becomes the only possible outcome.  That’s gamification in education.  Data driven thinking would suggest that with enough detail (happily provided by digital multi-nationals intent on not paying taxes while reaping record profits) we can engage a student and invisibly lead them to curriculum required (and usually very specific) learning outcomes.

Societies are societies because they’ve established patterns of thinking that the majority support.  To diverge from that pattern is to move towards the edges of social acceptance.  If you go too far you’ll have passed beyond social norms and become a pariah.  Society is very good at inventing words to describe people who aren’t conforming properly.  Creativity produces new thinking and so creatives tend to be outliers.  A liberal society accepts these creatives more than a conservative one (it is a distinct advantage of a liberal society).

If there is one social mechanism that enforces social norms it’s the public education system.  It has greater social contact with the population than the police or healthcare and focuses on the most pliable citizens (children).  This is generally done as benevolently possible, except when society itself has made some poor decisions, then public education quickly changes from an agent of personal empowerment to a means of indoctrination.  That education seems unwilling and incapable of fostering creativity through play shouldn’t come as a surprise.  That kind of nonsense isn’t conducive to a well organized, radically transparent, data-driven, modern classroom.  You’re not going to produce cooperative citizens if you ignore those societal truths.

Perhaps asking the education system to protect and nurture creativity and encourage play is beyond its capabilities.  As an agent of social conformity education tends to be the anathema of creatives, the lowest point in their creative lives, but if education doesn’t nurture and protect creativity don’t expect Twenty First Century Canadian society to do it.  Our society is becoming more stratified and rigid thanks to increasingly rigorous data driven control.  In a world where our attention is monetized and trained to expect digital frameworks, we are increasingly defined and limited by the data collected about us.  Play is a quantifiable waste of time and the creativity that arises from it is being cast aside.

Ironically, this is going to cost our society billions.