You hear a lot about the magic of the cloud these days.  It’s linked to online integration, website optimization and the evolution of computers. 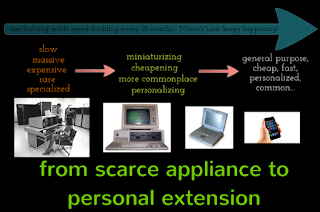 Integration and optimization involve encouraging users to put information online and making that data easy for aggregators to access.  The modern, monetized internet is built around turning data into a commodity.  The 2014 web is designed around encouraging you to put as much of your life online as possible because that data has value.


The idea of computers evolving from mainframes to desktops to laptops to smartphones appears self evident, but I’m not so sure.  I’m starting to think the devices prompted us online and the evolution idea was set up afterwards as a marketing angle.  Our devices might not be a response to market needs, but a push by the data bankers to get more people producing.

When you boot up a computer you’ve created a self contained virtual environment that is designed for and subservient to your needs.  Within that machine you have security, privacy and administrative power over your data.  It’s hard to argue that this is anything other than an empowering position for a user.

When you connect to the internet you surrender administrative control.  Your virtual environment is no longer yours, your data is no longer internal and local, it’s no longer your data.  Privacy is an antiquated idea you have to let go of and security is entirely at the discretion of hackers who are increasingly supported by big business and government.  When you go online you have lost that private computing experience and thrown it wide open to many interested parties.


Why have we stampeded to the cloud?  Did our devices change to serve our needs or have our devices been designed to drive us online?  Apple famously rolled out the ipad.  At the same time they put together itunes, which not only dominates media sales but has also now come to dominate app sales as well.  Selling an ipad is nice, constantly selling media is an exciting, never ending source of income.

Data as an income stream is at the root of our online migration.  Microsoft made billions selling an operating system, but the data produced inside it was very much the domain of the user.  Software we purchase for that environment had to also be subservient to the user.  This is a lousy approach if you want to monetize data and enjoy the benefits of a continuous income stream.

Blizzard realized this with the move to online gaming.  World of Warcraft was one of the first games to successfully follow the data=continual income model, charging monthly fees instead of a one time point of sale for the game.  The end result is a gamer spending hundreds of dollars on a game instead of the single $50 outlay.  If you don’t think it worked, check out how WoW compares to the other top grossing games of all time.

Google famously claims that it wants to organize the world’s information and make it available and useful.  This is always dressed in altruistic nonsense, but this is a profit driven business that goes to great lengths to not pay taxes.  Google is a data mining company, it always has been.  The happy result of this data mining is a remarkably accurate search engine that also happens to feed the data mining operation.

Once the search engine was established Google went after traditional desktop based applications.  Lite versions of word processing, spreadsheet software and other traditional desktop apps drew users in with the suggestion that your software and data could be wherever your internet connection was.  This drove the expansion of the internet as well as the need for more bandwidth. Once the apps were rolling other data collection techniques like mapping and geo-location were added to the mining process.  The more data that feeds the machine, the more ways it can monetize it. 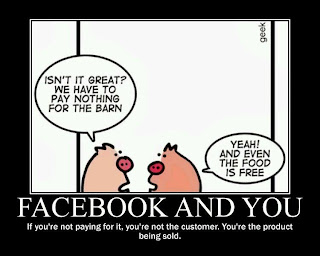 Claiming to be free, these apps drive users out of their private desktops and into the fishbowl of the internet.  Online apps feed data mining operations just like search engines do.  This blog is written on Blogger, a Google owned web application that encourages information to be put online so it can be mined.  Why do I use it?  Because I want to publish my writing.  In certain circumstances it makes sense to put data out into the fishbowl, but you don’t get to choose those circumstances on the web today.

The reason Google struggles with offering unmined online resources is because Google is a data mining company, it’s what they do.  This isn’t necessarily evil or nefarious, but it behooves us to understand how online companies work, especially if we’re going to get all giddy about driving students online.

A lot of infrastructure had to be put into place for your personal computer to be built, but that infrastructure is minuscule compared to what is involved in creating an internet.  The cost of building and maintaining a worldwide networking infrastructure is staggering.  The only way to make it cost effective is to make the data itself pay.  There are cost benefits to scaling up this kind of infrastructure, so online companies drive as many people into producing data as possible.

Any company that lives online can’t simply create something of value and then stand by it.  The sand is constantly falling through the hourglass, it costs bandwidth to offer even a simple online service in this expensive, complex, cut throat infrastructure.  The only way you can survive in an environment this carnivorously expensive is to make the data you’re attracting pay.  You push to schools, to charities, anywhere you can to generate input.

There is no such thing as a free online app.  The whole point of any online service is to get you producing data that can be mined.  This data is valuable even if your name isn’t attached.  Most privacy legalese attached to online services explicitly allows them to use your data as they see fit.  Cursory efforts are made to hide your name because no name = privacy, but your data is where the money is, and it isn’t yours according to most online agreements.  You surrender control of your data when you agree to use their data mining, um, nifty, online application.

Now that we’ve trained entire generations to ignore traditional media, this intrusive and invasive analysis is where market research has gone.  Multinationals don’t spend marketing dollars on TV commercials for people under thirty any more, it’s wasted money.  Instead, they drive the herd online, creating heat around exciting new smartphones / tablets / wearable computing – whatever gets people producing data to feed the network.

Again, this is neither good nor evil, but it is an evolution away from ideas of traditional advertising (which itself could be cast in a poor light).  The questions we need to ask ourselves as educators are:

There are ways to bypass all of this, but that means turning away from the carefully designed, market driven future laid out for us.  Education could adopt open source software that offers complete administrative control.  Educators could require students to actually learn how to manage digital tools from a mastery learning perspective (instead of whatever bizarre kids-know-this-stuff-intuitively / digital native thing we’re doing now).

We could supply Tor browsers for students to use that would guarantee real anonymity and privacy.  We could expect students and teachers to learn how to manage their own online spaces and develop their own tools with education as the focus and no hidden data mining agenda.  We could leverage the sharing power of the internet to spread these tools around the world at little or no cost, but we don’t, because the future we’ve been sold is so shiny that we can’t think of anything else.

At the Google presentation at the recent ECOO conference the g-employee asked the room, “why aren’t you all joining Google For Education?  I’m not going to go on until someone can tell me why!”  He was very enthusiastic in his hard sell.

In a less high-pressure sale situation I can formulate a response:  I use Google tools, but I make a point of understanding what they are.  I get the impression that most Google Certified Teachers are more interested in being unpaid sales reps than they are recognizing the complexities of cloud based computing.  Any teacher who rushes into branding themselves with a private company’s logo makes me question their commitment to pedagogy.  What’s more important, using the best tool available or using the best tool from your brand?  It’s a big reason why the idea of brand specific computing devices will never get my vote.

We’re being led to the cloud by implacable market forces who have monetized our information flow.  They offer ease of access, integration and a general malaise that many regular users of technology turn into ecstatic fandom.  You don’t need to learn this stuff, we’ll take care of all that for you, just hook yourself up to this milking machine and it’ll all be OK.