I just wrote about the spell casting nature of technical support when the Harry Potter metaphor extended itself.


In a grade 12 academic English class we were talking about 1984 and Brave New World.  The idea of a technological dystopia seemed very immediate for those seventeen and eighteen year old students.  They felt trapped by their technology, dependent on it, desperate for it, addicted to it!


One student mentioned that he forgot his smartphone on a recent trip and was beside himself not knowing what was going on.  I told him, “that used to happen in the old days, we called it blindness.”  It was said partly in jest, but the conversation turned to the idea that technology is becoming a part of us and when you leave a piece of personal electronics behind you actually suffer withdrawal.  Any modern teacher who has watched students in exams fidgeting and anxious will know the truth of this.


That student didn’t just feel like he’d lost a sense while he was away from his Blackberry.  The physical aspect of that very personal piece of electronics was like a missing body part; he even had phantom pains, reaching for it constantly when it wasn’t there.

With the Harry Potter spell casting through technology thing floating around in my head, it seemed a logical next step to look at his smartphone as a horcrux.  These personal pieces of electronics give us senses and abilities that a few years ago would have seemed magical.


In the case of personal devices like smartphones, tablets and even laptops, especially the really fetishy ones that Apple is famous for (though not exclusively), our tech has become as much a part of who we are as our clothing or other worn, personal icons.  If our personal technology defines us, then it’s a small psychological step from identifying with a physical object to believing our self-worth is an aspect of it. 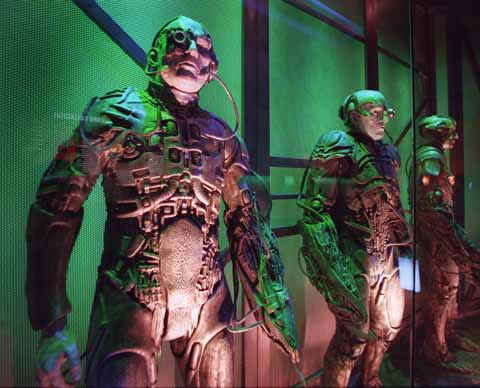 The difference between passive items like clothes and our interactive tech is that the tech touches our minds as well as our bodies, it feels like a piece of how we think.  From there it’s a small step to feeling like they are part of our core being; a piece of our souls.


When I was a teen, I wanted a car more than anything in the world, it meant freedom and mobility.  I had no interest in cars before I was able to drive, and then I was infatuated with them.  My encyclopedic knowledge of everything build in the ’80s and ’90s is a result of that infatuation (as well as my entirely dodgy string of vehicles).  I’ve been all about anthropomorphizing mechanical devices since I was a kid watching Lost in Space.


The relationship with personal electronics seems destined to eclipse the earlier affection we had for our mechanical devices.  The nature of these electronics means a mental as well as physical interaction, and our adaptable brains are more than ready to accomodate the change.


Voldemort put his soul into horcruxes to prevent his own destruction, much as Sauron did in Lord of the Rings.  The idea of off-loading or decentralizing ourselves to external devices isn’t a new one.  Looking at the involuntary and constant connection to smartphones in today’s teens, it appears to already be happening on a massive scale, and they themselves realize how different it makes them from the people who came before them.


You’ve got to wonder though…  why did these authors always have the villain do this de-humanizing thing for their own self-aggrandizement?