How do you show someone what something really is when they already think they know?

Building digital competency is made harder by the fact that students believe that they already know what they’re doing.  Students who think the our networked world consists of facebook, youtube and Google think they know it all, because it’s all they know. 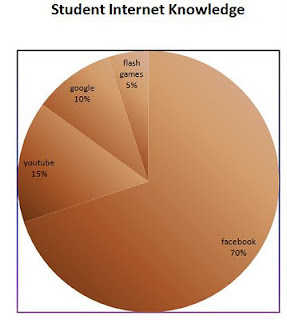 If we’re going to develop meaningful skill sets in students, we need to break down some long standing habits around believing that computers exist only for recreational use, and show students just how world wide the world wide web really is.

If we can break them out of their habits, and their very limited idea of what computers can do for them, we might be able to break the curse of the digital zombie, and develop some technology savvy students who are able to use technology instead of having technology using them

Operating a computer is like driving a car.  In both cases the technology enhances our natural abilities, and in both cases there is virtually nothing in the way of real understanding of what the technology is doing on the part of most users.  The vast majority of drivers are habitual creatures with little idea of the physics and mechanics behind what they are doing.  The majority of computer users are unimaginative, habitual users of their machines who stay away from experimentation in favour of what they know, mostly for fear of breaking what they know they can’t fix.

I used to think I was a dynamite driver, then I took a performance driving course at Shannonville, and realized how little I knew.  Following this up with a couple of years of cart racing in Japan, and I started to develop the craft of driving, rather than reinforcing the habit.

The defeat of habit in developing skill is the key to mastery.  If you can create a sense of perspective and experimentation with what you know, and what you don’t, you can learn to develop a set of skills beyond what you’ve already habitualized.  If your ignorance restricts you to the idea that you know everything, you are unlikely to ever move beyond that false sense of security and ignorance.

Many of our students live in this cave, watching the flickering lights, thinking that the flicking lights are all there are.  Pulling them out of their habitual ignorance is difficult, and I’ve often found that it’s best served by a drop in the deep end.  I’ve gotten more traction daring students to do something they thought they couldn’t than I ever have doing it for them (again and again).

As long as you can hang in the Zone of Proximal Development, you’ll be able to make them aware of their ignorance while offering them the tools to overcome it; the real heart of the teachable moment.