I think I need 3 bikes, a road bike, an off road/scrappy bike and a touring bike that lets me 2 up easily.  The wee garage would easily swallow this stable.  The Ninja was $3500.  I think I could cover the other two for $4500.  Keeping the bike stable at half what our cheapest car cost seems reasonable. 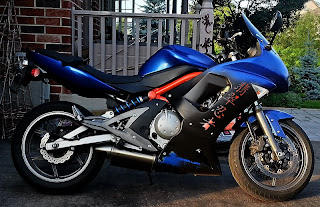 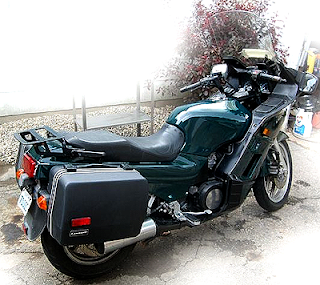 This Kawasaki Concourse was $2500 in the summer.  With a pillion seat-back it would make a great long distance shared riding bike.

Unless I can find a way to throw legs over as many bikes as I can, I can’t see another way to get an idea of how various bikes ride.  Finding a bike that does everything is a fool’s errand.  Bikes that claim to do this are a series of compromises.  The key to riding a variety of styles is to ride a variety of bikes.
The first bike that would suffer in a diversified garage would be the somewhat sensible all round Ninja.  In its place I’d be looking for a naked streefighter… a Triumph Speed Triple would be on my short list.

Motorbike show NOTE:  I had a chat with Riders Plus Insurance.  They insured me in my first year of riding and were helpful and efficient.  This time round I was curious about how insuring multiple bikes work.  They told me that buying a second bike means you’re doubling your insurance payments.  This doesn’t make a lot of sense to me as I can only ride one bike at a time.  I expected something like you’re insured at the rate of whatever the highest cost bike is plus 10% for the paperwork on the other bike.  What I was told was that you get a 10% discount on your second bike and pay another full set of insurance on it… which makes owning multiple bikes not really financially viable, so that dream goes down the toilet.